You Are Here: Home → Israeli jailed for arson attack on Church of the Multiplication

Israeli jailed for arson attack on Church of the Multiplication 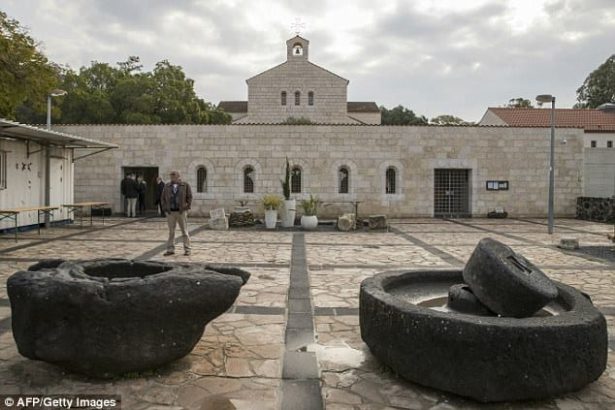 The Israeli district court in the Galilee city of Nazareth had earlier found Yinon Reuveni guilty of ‘aggravated arson’ and two counts of criminal conspiracy for the June 2015 attack on the Church of the Multiplication, also known as the Church of the Loaves and Fishes

An Israeli extremist is sentenced to 4 years in prison for the June 2015 arson attack of the church believed to be on the site where Jesus multiplied loaves and fish to feed 5,000.

by Rory Tingle for Mailonline

An Israeli man was sentenced to four years in prison for an arson attack at the church built where Christians believe Jesus performed the miracle of loaves and fishes.

The Israeli district court in the Galilee city of Nazareth had earlier found Yinon Reuveni guilty of ‘aggravated arson’ and two counts of criminal conspiracy for the June 2015 attack.

According to Israeli media, Reuveni is 23 and from Baladim, a wildcat Jewish outpost in the occupied West Bank. He has been described as a Jewish extremist.

His lawyer, Itamar Ben-Gvir, argued that the sentence was overly harsh and said he planned to appeal it as well as the verdict.

Two rooms of the Church of the Multiplication complex in Tabgha on the Sea of Galilee were badly damaged in the fire, but the church itself was not damaged.

Hebrew graffiti was found at the site, reading ‘Idols will be cast out’ or destroyed. The text is part of a common Jewish prayer.

The Roman Catholic church remained closed until February while the damage from the fire was repaired at a cost of around $1 million, of which the Israeli government contributed almost $400,000.

Tabgha was also the target of an April 2014 attack in which church officials said a group of Jewish teenagers had damaged crosses and attacked clergy.

Jewish extremists have carried out vandalism and attacks over the years targeting Palestinians and Arab Israelis as well as Christian and Muslim sites.