You Are Here: Home → How Israel represses the internet in Palestine

How Israel represses the internet in Palestine 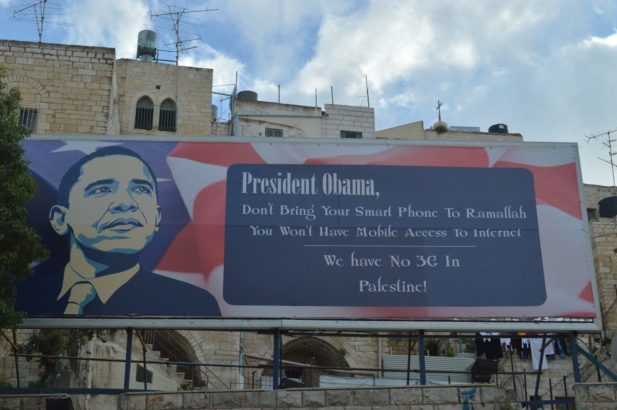 Palestinians posted billboards and placards in Ramallah during a visit from President Barak Obama calling for access to 3G networks, 2013.

Israel is keeping Palestinians in the Dark Ages technologically, at least 16 years behind the rest of the world in internet access, denying human development, which is a human right.

The U.S. Federal Communications Commission (FCC) recently announced a plan to repeal government regulations which ensure that internet service providers (ISPs) treat all data equally. This principle is known as “net neutrality,” and is intended to prevent ISPs from blocking or slowing down certain content, or charging additional fees to access them.

This decision has sparked outrage among many American citizens who fear that ending net neutrality would allow ISPs to limit competing internet content, or worse, to suppress certain political opinions and freedom of speech. The FCC will vote on the proposal on December 14, 2017. As this critical issue unfolds in the U.S., it is worth looking at the case of internet freedom for Palestinians living under Israeli occupation in the West Bank.

Published by the United Nations, the ICT Development Index ranks countries based on various information and communication technology indicators. For the 2016 year, Palestine (the West Bank and Gaza) ranked 123 out of 176. Israel, on the other hand, is up at the top at number 23. East Timor ranked 122, even though Palestine’s GDP is at least double its size, and the average Palestinian has completed twice the number of years of schooling as the typical person in East Timor.

This anomaly is a direct result of Israel’s occupation and control of Palestinians, and the severe technological gap is just another example of how Israel dominates and restricts almost all aspects of Palestinian life.

Bottom of the broadband barrel

This total control is most apparent when looking at Palestinian access to mobile broadband services, specifically to “3G” (Third-Generation) cellular technology, which is a minimum requirement for most smartphone functions. Astonishingly, Palestine was one of only four countries (along with Cuba, Comoros, and Eritrea), which had zero access to mobile broadband in 2016. Since then, Comoros has rolled out 3G and 4G services in the tiny island nation.

Palestinians are still stuck on outdated 2G technology (first introduced in Finland in 1991) because Israel maintains full control over the radio frequencies needed to operate cellular networks. Israel also restricts the development of Palestinian infrastructure and the entry of necessary equipment for such projects. For years, 3G equipment has been sitting in warehouses, waiting to be released by Israeli authorities.

As a 2015 report by Al-Shabaka points out, this is in violation of international human rights laws and treaties, as well as the Oslo Accords which Israel agreed to and signed. Specifically, Israel has an obligation to ensure the welfare of the occupied population and to allow its development, which is widely recognized as a human right. Furthermore, information and communications technology is such a critical driving force for human development that it is also being defined as a human right.

Israel argues that its refusal to allow Palestinians to employ 3G technology (which is now outdated too), is based strictly on security concerns. Due to the age of the technology, signals transmitted on 2G networks are indeed easier to intercept. However, researchers have shown that even 3G and 4G networks have vulnerabilities that make them highly prone to surveillance. Considering that Israel is widely known as an exporter of sophisticated technologies, perhaps one of the most advanced in the world, the security argument does not hold up. In addition, all Palestinian communications (whether from Gaza or the West Bank) must go through access points in Israel anyway, which means that it has great control over these transmissions.

In reality, Israel’s technological repression of Palestinians seems to be based more on economic interests. According to a 2016 World Bank report, unauthorized Israeli operators control as much as 30 percent of the cellular market in the West Bank. This is possible because Israeli companies provide high-quality 3G and 4G coverage to settlers that is also more affordable, so many Palestinian consumers have resorted to purchasing Israeli SIM cards.

The World Bank report estimated that the Palestinian cellular sector incurred between $436 million and $1.2 billion in losses due to Israeli restrictions from 2013 to 2015, most of which is attributable to the lack of 3G services. Over the same period, the Palestinian Authority lost between $70 and $184 million in Value Added Tax (VAT) revenue that it would have gained if Palestinians were not using Israeli services. This is one reason why it is now a crime for Palestinians to possess or circulate Israeli SIM cards, which has resulted in a black market.

In November 2015, Israel finally agreed to allow Palestinian companies to operate 3G networks in the West Bank, but two years later, this has not materialized.

Unsurprisingly, the belated decision in 2015 to allow 3G services in Palestine is not due to Israeli good will. Earlier that year, Israel awarded six companies the rights to operate 4G networks on a dedicated frequency band. If Israel allowed Palestinians to operate 3G earlier, there would have been much more congestion on the network and that would have negatively affected the quality of Israeli cellular service, which in turn impacts profitability.

Without 3G mobile internet access, Palestinians not only bear financial losses but they also incur opportunity costs that result from the inability to pursue technological innovation. Palestinian developers have had to create “light” applications (or apps) to make sure that they can work on the slow mobile networks. In some cases this is not enough. For example, a Palestinian app designed to show traffic delays and other conditions resulting from Israeli checkpoints is essentially useless while on the road, since it cannot display the data on a 2G network.

It is safe to say that Palestinians wish that net neutrality was their biggest concern when it comes to internet access. Instead they face severe net repression that is hindering their development and keeping them in subjugation to Israel. This is not only a violation of international law, but it also goes against all norms of basic human decency. Even if Israel allows the implementation of 3G in Palestine within the next year, it will not be doing Palestinians any favors by granting them access to technology that is more than 16 years old. The Israeli occupation of Palestine must end and Palestinians must be able to have full autonomy over their communications and every other aspects of their economy, as all other peoples of the world are entitled to.

Mohamed Mohamed is the Executive Director of the Jerusalem Fund for Education and Community Development in Washington DC. He is a graduate of the University of Texas at Dallas, where he majored in Political Science and completed his senior thesis on statelessness and its practical implications on Palestinians living in the refugee camps of Lebanon. He also earned an M.A. in International Relations and an M.S. in International Political Economy from the University of Texas at Dallas.