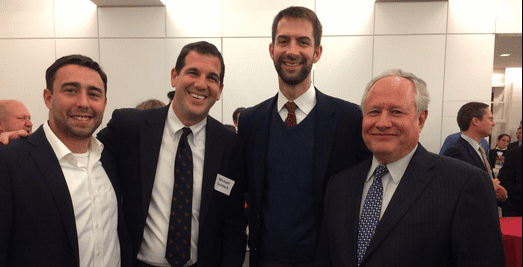 Tom Cotton, expected to become CIA director, is owned by the Israel Lobby. In his 2014 election he received $1 million from the Emergency Committee for Israel and additional money from the Republican Jewish Coalition… Foundation for Defense of Democracies is neocon central… expect the neocons to initiate armed conflict…

Back during the admittedly brief shock and awe period that immediately followed on the Trump electoral victory, it appeared that there might be an actual realignment of American foreign policy. The neoconservatives virtually unanimously had opposed Donald Trump in the most vile terms, both in the GOP primaries and during the actual electoral campaign, making clear that Hillary was their choice for a future full of unrelenting, ideologically driven warfare to convert the world to democracy. By that metric, one would assume that Trump would prefer to be roasted on a spit rather than have neocons on his national security team, and many in the punditry did agree with that analysis and went on to share that view.

At the time, I agreed, but I did note that the neoconservatives have proven to be remarkable resilient, particularly as many of them have remained true to their Democratic Party values on nearly everything but foreign policy, where they are irredeemable hawks, hostile to Russia and Iran and always reliably in the corner of Israel. In short, many neocons can be unmasked as Hillary Clinton Democrats if one looks at them issue by issue, which certainly helps to explain some subsequent developments.

Some Washington observers who actually care about such things have been writing how there has been a kumbaya process going on between self-described conservative neocons and liberal interventionists. Katrina vanden Heuvel describes the progressive hawks as “the essential-country crowd,” borrowing a phrase from ex-Secretary of State Madeleine Albright.

There are inevitably minor disconnects between the two groups based on their motives for aggression – Democrats claim to do it to bring democracy and freedom while Republicans say they do it to enhance national security. Both are lying in any event as it all comes down to great power rivalries, with big powerful nations pushing smaller weaker nations around because they are able to get away with it and feel more comfortable if everyone lines up behind them.

So everyone in Washington and New York’s financial services industry agrees that a more assertive America is a better America even when the reality is that no one winds up with either democracy or security. Which brings us to the latest shuffle in the Donald Trump cabinet and what it is likely to mean down the road. Multiple sources are predicting Tillerson out and Mike Pompeo in at State Department with Pompeo replaced at CIA by Senator Tom Cotton. The White House is denying the story, calling it “fake news,” but it is clear that Trump is uncomfortable with the current arrangement and Tillerson will be gone sooner or later.

Mike Pompeo as Secretary of State replaces a somewhat bumbling businessman adept at dealing in energy futures contracts who has been struggling with reducing State’s enormously bloated payroll. Pompeo, a real hard-nosed political hardliner who tends to see complex issues in fairly simplistic ways, has become a presidential confidant, briefing Trump frequently on the state of the world, most recently pushing for the horrific decision to recognize Jerusalem as the capital of Israel. In a recent speech , Pompeo criticized the CIA, observing that it had both forgotten how to spy, which is almost certainly true, while adding that it will have to become “more vicious” to accomplish its mission of making the United States “safe.” Pompeo would like to turn the United States into an unleashed wrecking ball directed against the enemies of the American Way and he appears intent on starting that process in the Middle East.

And Pompeo will be replaced as CIA Director by Tom Cotton. The less said about Tom the better, but I will attempt to summarize in 8 words here: Tom is completely owned by the Israel Lobby. In his 2014 election as junior Senator from Arkansas, he received $1 million from the Emergency Committee for Israel headed by Bill Kristol as well as additional assistance from the Republican Jewish Coalition. In March 2015, Tom paid those supporters back when 47 Republican United States Senators signed a letter allegedly written by him that was then sent to the Iranian government directly, warning that any agreement over that country’s nuclear program reached with President Barack Obama would likely be overturned by the Congress. The letter, which undercuts the authority of the American president before an international audience, was signed by the entire Republican Party leadership in the Senate and also included then presidential contenders Rand Paul, Marco Rubio and Ted Cruz.

I do not wish to imply that Cotton and Pompeo are somehow stupid, but they do tend to see the world in a very monochromatic fashion, just like their boss. Pompeo was first in his class at West Point and Cotton graduated from Harvard as an undergrad and also from the Law School. Trump claims to be the smartest person in the room no matter where he is standing. But for all the academic credentials and other posturing, it is hard to imagine how the new choices could possibly be worse from a common-sense perspective unless one includes Nikki Haley, who is, fortunately, otherwise engaged. Haley really is stupid. And ambitious. And is also owned by the Israel Lobby, which appears to be a thread that runs its way through all the Trump foreign policy appointees.

What is wrong about the whole Trump team is that they all seem to believe that you can go around the world kicking the shit out of everyone without there being any consequences. And they all hate Iran for reasons that continue to be obscure but may be connected to their relationships with – you guessed it – the neoconservatives and the Israeli Lobby!

Yes, the neocons are back. I noted back in October that when Pompeo and National Security Adviser H.R. McMaster wanted a friendly place to drop by to give a policy speech that would be warmly received they went to the Foundation for the Defense of Democracies (FDD), whose marketing masthead slogan is “Fighting Terrorism and Promoting Freedom.” FDD is currently neocon central, used like the American Enterprise Institute was when Dick Cheney was Vice President and needed a friendly audience. It is headed by Canadian Mark Dubowitz, whose passion in life is making sure that sanctions on Iran are enforced to the letter. Unfortunately, it is not easy to deport a Canadian.

Neocon watchers will undoubtedly note that big names like Brill Kristol, the Kagans, Michael Chertoff and Max Boot will not be showing up in government. True, but that is because they will instead be working through their foundations, of which FDD is only one. The Alliance for Securing Democracy, which has recently sprung up in lobby-land, markets itself as “bipartisan, and transatlantic…” but it actually is pure neocon. Its goal is to “expose Putin’s ongoing efforts to subvert democracy in the United States of America and Europe.” It includes the usual neocon names but also has the loyal Democratic opposition, including ex-CIA Acting Director Mike Morell and Jake Sullivan, both of whom were top level advisers to Hillary Clinton.

The replacement of former political appointees in the government has been so slow in Trump’s first year that it has actually benefited the neocons in their recovery. Many survivors of the two previous administrations are still in place, nearly all of whom reflect the hawkishness prevalent during 2001-2016. They will be supplemented by second and third tier neoconservatives, who will fill in the policy gaps, virtually guaranteeing that the neocon crafted foreign policy that has been around for the past sixteen years will be here for some time longer.

What all this means is that, now that the Palestinians have been disposed of and the Israelis rewarded, we can expect armed conflict with Iran within the next year, followed by increased hostility towards Moscow as Russiagate continues to play out. I do not even want to guess at what kind of insanity the gang in the West Wing Situation Room will come up with for dealing with North Korea. The good news is that the builders of home bomb shelters, a booming enterprise when I was growing up back in the 1950s and 1960s now used to cultivate mushrooms, will be back in business.

Philip M. Giraldi, Ph.D., is Executive Director of the Council for the National Interest, a 501(c)3 tax deductible educational foundation that seeks a more interests-based U.S. foreign policy in the Middle East. Website is www.councilforthenationalinterest.org, address is P.O. Box 2157, Purcellville VA 20134 and its email is inform@cnionline.org.