You Are Here: Home → Dionne and Shields ignore the Adelson in the room

Dionne and Shields ignore the Adelson in the room 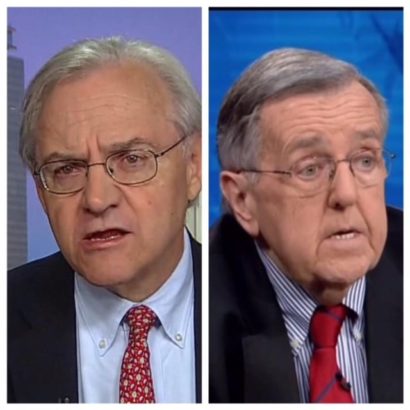 Two liberal commentators said Trump recognized Jerusalem as Israel’s capital because he wanted to influence evangelical voters, but left out that Trump’s largest donor was Sheldon Adelson, who has been demanding the embassy be moved to Jerusalem – and that Trump’s campaign promise about the embassy was given at AIPAC’s national convention in Washington DC, not in a red state…

By Philip Weiss, from Mondoweiss

E.J. Dionne of the Washington Post said so on All Things Considered:

I think there’s a lot of evidence that this has to do with domestic politics. I heard one evangelical leader say this week that partly this was about intervening in the Alabama Senate race because a lot of evangelicals who are – will be a big part of Roy Moore’s base feel very strongly about Israel.

Mark Shields repeated the claim on the PBS News Hour:

It’s been particularly popular with evangelical Christians, the idea of Jerusalem as the capital of Israel and recognizing that. It is no accident that it happened the week before the Alabama primary, where Donald Trump, according to the Pew national poll, has fallen from 78 percent support among evangelical Christians down to 61 percent.

And BTW, Mary Louise Kelly of NPR echoed Dionne, saying: “This is the president keeping a campaign promise to his base.”

Let’s get clear about some facts. Trump made the promise to move the embassy during the presidential campaign, in May 2016, to a Jewish organization, the Israel lobby group AIPAC. He did not do so in a red state but in the swamp called Washington, D.C., and over and over again vowed to support Israel:

When I become president, the days of treating Israel like a second-class citizen will end on Day One….

We will move the American embassy to the eternal capital of the Jewish people, Jerusalem.

Maybe Trump also issued that promise in speeches to “his base” — Christian audiences. I don’t know. But the clip all the networks used this week was the AIPAC speech.

Then in January 2017, Trump told an Israeli reporter for Sheldon Adelson’s newspaper, Israel Hayom, that he stood by his word:

“Of course I remember what I told you about Jerusalem. Of course I didn’t forget. And you know I’m not a person who breaks promises.”

Again, no rednecks in sight.

Shibley Telhami, the Brookings analyst, says that evangelicals are the one American group that favors moving the embassy to Jerusalem, but that support is “hardly overwhelming”: 53 percent are for it, 40 percent are against it.

Haaretz, the BBC, Time, and the New York Times have all been more straightforward than Dionne and Shields about the fact that Trump’s biggest donor Sheldon Adelson– who gave upwards of $25 million to the campaign — has been ardent about moving the embassy to Jerusalem. Anthony Zurcher of the BBC cited evangelicals first, national security hawks second, and Sheldon Adelson and other donors third. Alana Abramson at Time cited Adelson and other Jewish donors as influencing Trump, though she also mentioned evangelical voters. She said the the timing of Trump’s announcement was propitious, just before the White House Hanukkah party, where he would be drenched with love.

Clifton cited two solid reports on the importance of Jerusalem for Adelson. Adelson was reportedly “furious” last May when Secretary of State Rex Tillerson said that moving the embassy could harm the Israeli-Palestinian peace process. Adelson “doesn’t buy the argument.” He said, “Palestinians are impossible negotiating partners.”

And there was a report in Adelson’s own Las Vegas newspaper two months ago:

“The Adelsons reportedly have been disappointed in Trump’s failure to keep a campaign pledge to move the U.S. Embassy to Jerusalem on his first day in office.”

Nathan Guttman in the Forward said this week that evangelicals drove the move for Trump to name Jerusalem as Israel’s capital. But if you read the piece, his evidence is fairly skimpy. Pat Robertson and John Hagee celebrate the move. But Sheldon Adelson cares even more. Adelson has raised the issue “repeatedly.”

CUFI, a pro-Israel Christian group that reaches millions of supporters, has called for Trump to recognize Jerusalem and relocate the embassy in events it holds across the nation and in lobbying meetings on Capitol Hill and with the executive branch. Republican mega-donor Sheldon Adelson, one of CUFI’s key benefactors, has the same….

A well-placed source in the Jewish community told the Forward that Adelson raised the issue with Trump repeatedly in their meetings and conversations before the elections and after Trump took office. His main ally promoting this call was Steve Bannon, Trump’s former top strategist, who famously put relocation of the embassy on his whiteboard to-do list.

I’d point out that Jerusalem was front and center for Adelson going back to 2000, when he was a generous contributor to the Bush campaign and also to One Jerusalem, a group founded by neoconservatives Dore Gold and Douglas Feith among others out of concern that a U.S. peace deal would divide Jerusalem. President Bush also promised to move the embassy to Jerusalem, and did not. But he surely made Adelson happy by doing nothing for years about the peace process.

It is perfectly fair for Mark Shields and E.J. Dionne to cite evangelical voters as a possible factor in Trump’s decision. Many reporters do. As for the Alabama claim–  Steve Bannon brought Jerusalem up at a rally there, but I’d like some reporting on whether anyone really cares.

But to leave out Sheldon Adelson and AIPAC — that’s pure obfuscation on Shields and Dionne’s part. They know better, but they cannot broach the role of the Israel lobby.