You Are Here: Home → The President Who Stole Christmas

The President Who Stole Christmas 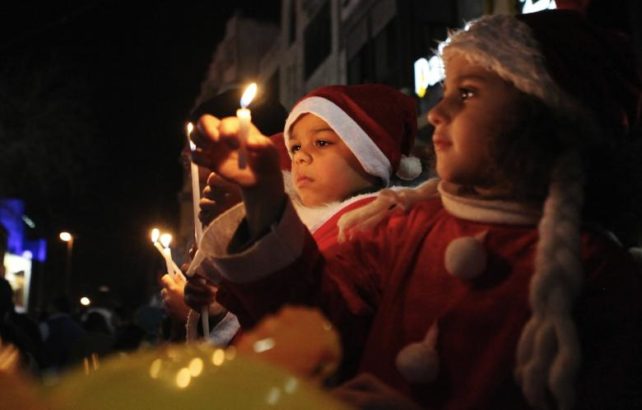 A Palestinian in Jerusalem writes: “Prior to Trump’s announcement, we were in the first week of a joyous Christmas… Christmas trees in every shop and restaurant, Santa hats in cars and Christmas carols sung everywhere. Giant Christmas trees lit in the main squares of the cities with tens of thousands of Christians and Muslims celebrating together… now the lights are extinguished…

Below is an email from a close friend, Laurie Salameh. She lives in Jerusalem with her  husband Estaphan, and their three children. I asked Laurie for permission to share her email, which she had circulated to friends. She gave her permission.

President Trump stole our Christmas. And he did it standing in front of Christmas trees. 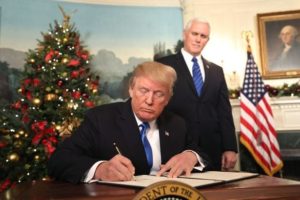 In what was an unusually polished speech (for him), President Trump announced the U.S. recognizes Jerusalem as the capital of Israel and has plans to relocate the U.S. embassy to there from Tel Aviv. We sat on our couch watching, our hearts pounding and our fists clenching, wondering whether it was ignorance, lunacy or plain hubris that drove him to make this announcement.

How can one man decide to take our historical capital away and give it to another country? How can he do that without acknowledging the hundreds of thousands of Palestinians who live in Jerusalem? Who live in the city of their birth without access to services, without basic human rights, who live unacknowledged? What happens to them?

Prior to this announcement, we were in the first week of what was proving to be a joyous Christmas here in the Holy Land. Though we make up less than 2% of the population, Christmas is in full-swing in Palestine. Christmas trees in every shop and restaurant, Santa hats in cars and Christmas carols sung everywhere. Giant Christmas trees lit in the main squares of the cities with tens of thousands of Christians and Muslims celebrating together.

My son sang “Deck the Halls” in a performance for the Ramallah Municipality with his classmate Ahmad. And this is my point – while Muslims don’t practice Christmas traditions as part of their faith, they give Christians space and time to celebrate it and many even celebrate with us.

I’ve had lengthy conversations with my Muslim friends on who sells the best parts for gingerbread houses, who bakes the tastiest Christmas cookies, where to find the prettiest ornaments or the best church bazaars. We may constitute less than 2% of the population but we are 100% part of the community.

And that’s what makes President Trump’s pronouncement all the more sickening. With his declaration, the Christmas lights turned off. The Christmas music has quieted. The Christmas tree in Nativity Square in Bethlehem has gone dark. The Christmas spirit has been drowned out with the mourning of our stolen capital.

About a week ago in front of a crowd in Missouri, President Trump said “I told you we’d be saying Merry Christmas again.” I don’t know who hasn’t been saying “Merry Christmas,” because we sure have here in Palestine. But I can tell you this… we will celebrate Christmas this year, because Christmas is obviously more than the trees and lights and music… but it won’t be a merry one.