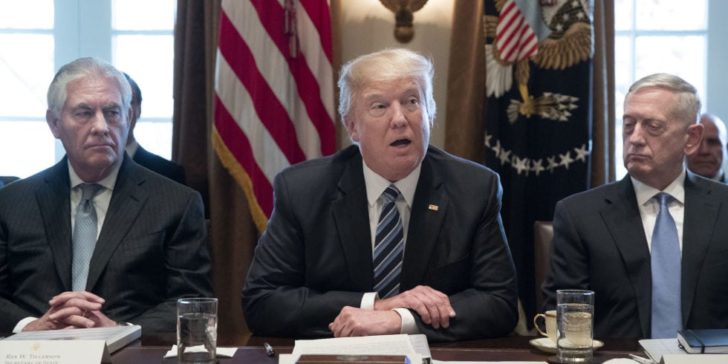 Trump decided to keep his campaign pledge, despite warnings from Defense Secretary James Mattis and Secretary of State Rex Tillerson that the move would endanger American diplomats, undermine efforts to revive the Israeli-Palestinian peace process, and be condemned by both Arab countries and America’s most important allies in Europe…

Domestically, Trump has little to worry about. For 70 years the Democrats have fawned over Israel, while the Republicans’ Christian Evangelical base is in full support of the embassy move. Furthermore, the GOP has been desperate to break into what was once a Democrat-only monopoly on Jewish-American political funding—and Jewish votes.

Pay attention: This is what it feels like to live in a nation whose moment has passed…

The President insisted on his Jerusalem moment, but the impact will be forever.

Donald Trump’s announcement that the U.S. now recognizes Jerusalem as the capital of Israel, and will eventually move its embassy there, might well be the most predictable decision of an otherwise unpredictable presidency.

Trump made his Jerusalem promise back in March of 2016, during an address he gave to the American Israel Public Affairs Committee (AIPAC). It was an obvious attempt to convince skeptical Jewish leaders of his uncompromising support for Israel.

But it’s not only that Trump was intent to fulfill a campaign promise: The Jerusalem initiative has been in the works since the day he took office, was coordinated with Israeli Prime Minister Benjamin Netanyahu, and is supported by influential voices in the administration—including Vice President Mike Pence, son-in-law Jared Kushner, Middle East envoy (and former Trump Organization lawyer) Jason Greenblatt, and CIA Director Mike Pompeo. The decision was all but finalized, The American Conservative has learned, during a late November meeting of Trump’s foreign policy advisors at the White House.

The November confab was well underway when Trump arrived to press his case. While the president was only expected to stay in the meeting for 15 to 20 minutes, he ended up staying for a full hour. Trump, TAC was told by a senior Pentagon officer with knowledge of the meeting, was adamant about keeping his campaign pledge, but was brought up short by warnings issued by Defense Secretary James Mattis and Secretary of State Rex Tillerson. Both officials argued that the move would endanger American diplomats serving in the region, undermine the administration’s efforts to revive the Israeli-Palestinian peace process, and result in condemnations from both Arab countries and America’s most important allies in Europe. Trump could expect almost no support in the international community, they said. America would “have to go it alone.”

Trump listened closely to the warnings over the next hour (“it was a very intense exchange,” TAC was told by the senior Pentagon official, “but it certainly wasn’t heated”). But at the end of the discussion the president said that he would go ahead with his decision despite the difficulties it might cause. He also acknowledged concerns about possible threats to U.S. diplomats, and said that he would dampen them by repeating U.S. assurances that it was committed to a two-state solution. Moreso, he argued, the U.S. did not need to move its embassy from Tel Aviv to Jerusalem immediately—which would serve as a further reassurance.

Even so, Wednesday’s announcement about Jerusalem was tortured by a number of inherent contradictions, including the most prominent of all—the contention that the decision was not only in the “best interests of the United States,” but would actually enhance the prospects of a two-state solution and energize the peace process. “We are not taking a position on any final status issues,” Trump added, “including the specific boundaries of Israeli sovereignty in Jerusalem or the resolution of contested borders. Those questions are up to the parties involved.” The decision is “in the best interests of the United States of America and the pursuit of peace between Israel and the Palestinians.”

In fact, it seems unlikely that this unseemly sleight-of-hand (of making dubious claims), will allay Arab fears that the U.S. continues to be “Israel’s lawyer” (to use a term coined by former U.S. Middle East negotiator Aaron David Miller). Now it has also become Israel’s realtor. This seems not to bother the president, who is becoming known for playing a poor hand by throwing in more chips.

The strategy is almost perverse in its beauty, and was on full display among administration officials intent on selling the president’s Jerusalem initiative in the wake of his address. The Trump announcement, as one of them argued, doesn’t undermine the peace process—not because there isn’t one (as everyone suspects), but because there is, and it’s going swimmingly. Trump, this official added, was actually anxious to make Wednesday’s announcement because he was so encouraged by the progress made on the Israeli-Palestinian peace process by Jared Kushner and his team. “I know a lot of that progress isn’t visible,” as this official was overheard saying to a prominent television reporter, “[but] it’s partly because that progress is not visible that they’ve been able to make so much progress.”

Domestically, it would seem Trump has little to worry about. The Democrats have spent the last 70 years (since 1948), fawning over Israel and defending it, while the Republicans’ Christian Evangelical base is in full-throated support of the embassy move. Furthermore, the GOP has been desperate to break into what was once a Democrat-only monopoly on Jewish-American political funding—and Jewish votes. In this sense, Mr. Trump’s Jerusalem announcement can be seen as a kind of coming out party—a celebration that the monopoly has been broken, that the Republicans have arrived. Then too, the bedrock of progressivism of American Jews (who supported any number of progressive movements over the last decades), has been overawed by concern that Israel can best be defended by backing pro-military conservative interventionists.

And so it is that President Trump’s Jerusalem announcement might well be seen as a significant and decisive victory—for Israel, for the Republican Party, and for those Jewish Americans who have had to choose between their progressive ideals and their support for a nation that is anything but. The result is stark, discomforting. It may be that the controversy will fade, that the Arab world will remain quiet, that the Trump administration will use the Jerusalem decision as a springboard to launch a creative and fair resolution of the Israeli-Palestinian conflict. That Jared Kushner will succeed where George Mitchell did not. But that doesn’t seem likely.

Rather, it’s probable that the governments of Europe will remember the real import of this decision—that when asked to stand with our European allies and Arab friends, we chose Israel instead.

Pay attention: This is what it feels like to live in a nation whose moment has passed.

Mark Perry is a foreign policy analyst, a regular contributor to The American Conservative and the author of The Pentagon’s Wars, which was released in October. He tweets @markperrydc