You Are Here: Home → Jared Kushner Failed to Disclose He Led a Foundation Funding Illegal Israeli Settlements Before U.N. Vote 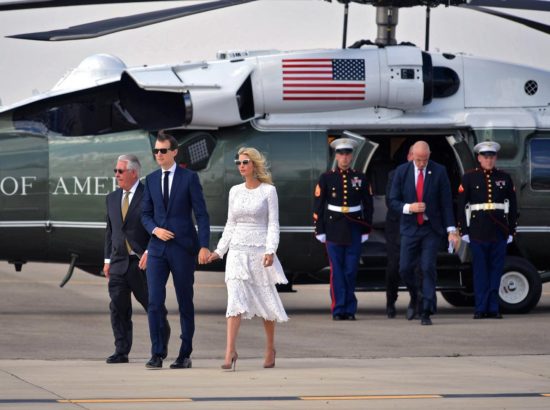 Jared Kushner and Ivanka Trump making their way to board Air Force One before departing from Ben Gurion International Airport in Tel Aviv on May 23.

Jared Kushner’s failure to reveal his top position on the Kushner Fund, a family charity that funds illegal Israeli settlements, follows his recent attempt to pressure the UN vote on Israeli settlements as well as other failures to fully disclose financial information.

by Chris Riotta, from Newsweek

Jared Kushner failed to disclose his role as a co-director of the Charles and Seryl Kushner Foundation from 2006 to 2015, a time when the group funded an Israeli settlement considered to be illegal under international law, on financial records he filed with the Office of Government Ethics earlier this year.

The latest development follows reports on Friday indicating the White House senior adviser attempted to sway a United Nations Security Council vote against an anti-settlement resolution passed just before Donald Trump took office, which condemned the structure of West Bank settlements. The failure to disclose his role in the foundation—at a time when he was being tasked with serving as the president’s Middle East peace envoy—follows a pattern of egregious omissions that would bar any other official from continuing to serve in the West Wing, experts and officials told Newsweek.

The first son-in-law has repeatedly amended his financial records since his initial filing in March, along with three separate revisions to his security clearance application. Despite correcting his financial history on multiple occasions, he has yet to include his role as co-director to the family foundation.
The omission was first discovered by a team of researchers at American Bridge, a progressive research and communications organization, and shared exclusively with Newsweek on Friday afternoon. The researchers suggested Kushner’s failure may have been more than an inadvertent mistake, but instead an attempt to avoid “potential conflicts with his job negotiating Middle East peace.” Newsweek later independently confirmed Kushner’s omission on his multiple financial disclosures.

“Every successive failure to disclose his financial holdings makes it harder and harder to believe Jared Kushner isn’t trying to intentionally deceive the American people,” Pat Dennis, the group’s research director, told Newsweek. “At the very least, his security clearance needs to be revoked immediately. He has no business accessing sensitive national security information.”

The foundation donated at least $38,000 between 2011 and 2013 to a fundraising group building a Jewish seminary in a West Bank settlement known as Beit El. During that period, Kushner’s foundation also donated an additional $20,000 to Jewish and educational institutions in settlements throughout the region, the Associated Press reported. Had Kushner included the role in his financial records, his involvement in such donations—and the following conflicts of interest that could possibly arise in his government position—may have been considered by the Office of Government Ethics.

Despite the U.S.’s long-standing policy to diplomatically reject the construction of Israeli settlements, Kushner seemed to wave in a new diplomatic era among members of Trump’s transition team working on foreign issues, according to sources who spoke with The Washington Post, NBC, BuzzFeed and Bloomberg. Each of those reports pointed at Kushner as being the “very senior member” of the transition team mentioned in charging documents special counsel Robert Mueller filed Friday

Kushner demanded future national security adviser Michael Flynn “get on the phone to every member of the Security Council and tell them to delay the vote” on the West Bank settlement resolution, BuzzFeed reported Friday. The move may have violated the 200-years-old law called the Logan Act, which bars “unauthorized citizens” from negotiating with “foreign governments having a dispute with the United States.”

Flynn’s guilty plea appears to indicate he’s cooperating with Mueller’s team and could be willing to shed more light on how critical decisions were made throughout the transition, as well as on Russia’s impact in the 2016 presidential election.

“My guilty plea and agreement to cooperate with the Special Counsel’s Office reflect a decision I made in the best interests of my family and of our country,” Flynn said in a statement. “I accept full responsibility for my actions.”

Kushner stated that he was a member of the board of directors of the Kushner Family Foundation from 2010 to 2017, though publicly available financial records for that foundation do not include his name on the board. Instead, Kushner’s role as a director for one of his family foundations can be found in the Charles and Seryl Kushner Foundation’s financial records from 2015—the last year of which such documents are currently available to the public.

Whether Kushner’s latest discovered omission was intentional or not remained a mystery on Friday afternoon, as news was exploding surrounding his involvement in the U.N. Security Council vote, which ultimately approved the resolution condemning West Bank settlements. Representatives for the Office of Government Ethics, Jared Kushner, and the Charles and Seryl Kushner Foundation did not immediately respond to requests for comment.

“He’s revised his forms several times already,” Dennis said. “There’s no reason his lawyers couldn’t have done what our researchers did. It wasn’t rocket science.”