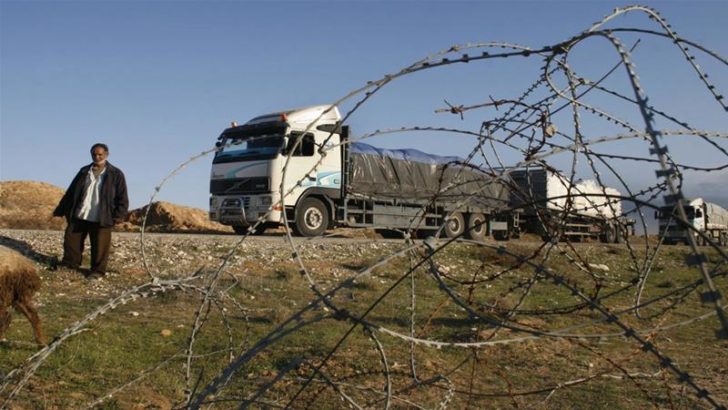 The Karam Abu Salem border crossing has been used in the delivery of commercial goods, as well as humanitarian and foreign aid to the Gaza strip [File: Hatem Omar/The Associated Press]

Hamas has condemned an Israeli decision to seal off the Karam Abu Salem commercial border crossing, the primary passageway that transfers necessities to residents of the besieged Gaza Strip.

The group, which governs the enclave, described Monday’s measure as a “crime against the people of Gaza”, blaming the international community’s prolonged silence that encourages Israel’s blockade on Gaza.

Earlier on Monday, Israel said it will be closing off the Karam Abu Salem border crossing, saying it was in retaliation over Palestinians setting fire to Israeli land.

Israeli Prime Minister Benjamin Netanyahu said the decision to shut down the border was taken in coordination with the country’s defence minister.

The move, which will come into effect on Tuesday, will only allow for the transfer of humanitarian needs such as cooking gas as well as wheat and flour into Gaza, an official responsible for coordinating the movement of cargo through the border confirmed to Al Jazeera from Gaza.

Raed Futooh said items that will be banned from entering the strip, which is home to more than two million people, include clothing goods and construction materials such as “plastic and chemicals”.

The crossing, which would usually be sealed off during official Israeli holidays and on weekends, also aided in the delivery of foreign aid to Gaza.

In recent weeks, Palestinians in Gaza have been protesting against the naval, aerial and land blockade imposed by Israel and neighbouring Egypt since 2006.

Some have used flaming objects attached to kites to set fire to agricultural land just over the fence.

So far, they have caused $2.5m in damage to farmland, according to Israel’s government.

Israel had been using drones to intercept the kites, but Palestinians have had some success in bringing the drones down.

In previous retaliatory measures, Israel struck targets belonging to Hamas, blaming the group for the launching of the kites.

The closure of the Karam Abu Salem border crossing will also affect Gaza’s exports, further straining an already crippled economy brought to its knees by the 12-year blockade.

“We used to export all sorts of things,” Futooh, 44, said. “From fish and vegetables to clothing items and wood,” he said.

Gaza’s exports used to reach consumers in the occupied West Bank, Jordan and “even Israel”, according to Futooh.

Some 40 to 50 trucks transporting local goods used to leave the strip on daily basis, Futooh added.

“The economy in Gaza is already extremely damaged due to the siege and the various Israeli assaults, but the latest move will worsen the state of the strip to a further extent.”

Netanyahu also warned in a series of posts on Twitter that “additional steps” will be taken to address the “Hamas regime … immediately.”

PM Netanyahu: "About Gaza, I have been telling you for some time that I do not intend to publicize in advance all the steps that we are taking or planning. But the Defense Minister and I agree that we will be heavy-handed with the Hamas regime in the Gaza Strip – immediately.

“The latest retaliatory measure by Israel made no mention to the fishing limit in Gaza, but we expect to hear from them on Tuesday,” he said.

Israel allowed for a slight expansion of the fishing zone limit from six to nine nautical miles three months ago. This happens on occasion, and usually lasts for only three months at a time with the objective of boosting Gaza’s economy, which is heavily reliant on the fishing sector.

Although the expansion allows the fishermen to reach a wider array of fish, the nine-mile nautical border is still not enough to serve some 1,000 boats.

“The three-month mark is about to end anyway,” he said. “So we will be back to fishing at only six nautical miles soon,” Ayash explained.

“What’s needed is pressure on international community … Israel must end its long and cruel closure of Gaza,” he told Al Jazeera.

Since March 30, Palestinians in Gaza have also been protesting for Palestinians’ right to return to the homes from which they were expelled from in 1948.

At least 135 people have been killed by Israeli gunfire during the popular demonstrations – dubbed the Great March of Return – that have been taking place along the fence with Israel.