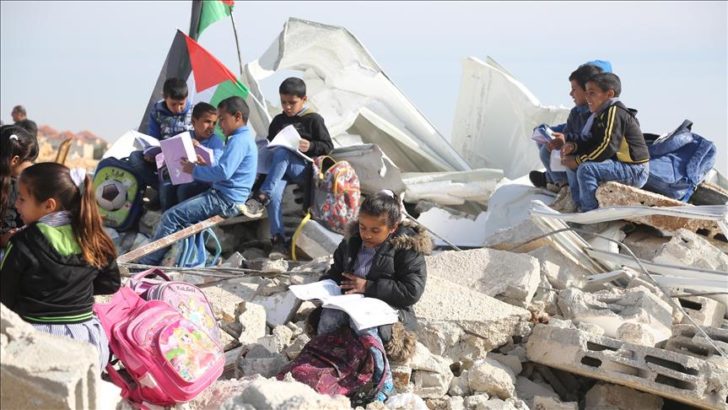 Students of Abu al Nuwar primary school are seen as they continue to study on the debris of their school building after Israeli forces have demolished some of the classrooms on the grounds that the school was unlicensed in Jerusalem on February 04, 2018. (Issam Rimawi – Anadolu Agency)

While the Bedouin village of Khan al Ahmar has been getting worldwide attention, it is not the only target for demolition by Israeli expansionism. Nearly one tenth of the residents of Abu al Nuwar just became homeless thanks to an illegal policy in which Israel refuses to grant building permits to Palestinians who need to build; when they build without a permit, their homes are routinely destroyed.

Israeli forces demolished nine homes and three agricultural buildings in the Palestinian Bedouin community of Abu Nuwar at 9:00AM on July 4, 2018. Abu Nuwar lies on the eastern outskirts of Jerusalem in the central West Bank.

Ma’an News reported that Israeli forces raided the village, evicted locals from their homes, removed some of their belongings, and then demolished the structures. Israeli human rights group B’Tselem estimates that the demolitions left 62 people newly homeless.

According to the UN Office for the Coordination of Humanitarian Affairs (OCHA), at least 670 Palestinians live in Abu Nuwar, 88 percent of whom are refugees. Abu Nuwar is located in Area C of the West Bank on the outskirts of Jerusalem, meaning it is under full Israeli military and civil control. Between 2010 and 2014, OCHA found that Israeli authorities approved just 1.5 percent of Palestinian building applications in Area C. Moreover, Abu Nuwar is one of the dozens of Palestinian Bedouin communities in the central West Bank at heightened risk of forcible transfer due to Israeli plans that aim to settle eastern Jerusalem (the E1 corridor) and thereby connect Ma’ale Adumim settlement to Jerusalem.

Israeli demolitions in Jerusalem appear to be on the rise since the month of Ramadan ended – a time when Israeli authorities will temporarily halt most demolitions. At the end of June, Israeli forces demolished nine Palestinian-owned buildings in Jerusalem just four days.