You Are Here: Home → Thanks to Gaza protests, Israel has a new crop of ‘battle tested’ weapons for sale 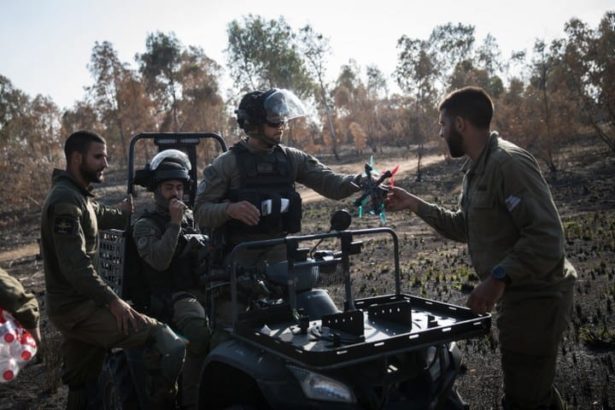 Israeli Border Police dismantle a Palestinian kite they took down with a drone in a field near the border with the Gaza Strip, May 15, 2018. (Hadas Parush/Flash90)

A new report reveals how Israel is using the protests in Gaza to test and showcase its arms industry. From grenade-carrying and skunk water-carrying drones to “smart fences” and more, Israel is profiting from the carnage it is causing in Gaza.

(One has to wonder where Israel gets the money to afford all these war toys, doesn’t one?)

In an interview earlier this past April, Sa’ar Korush, who until recently served as the CEO of the company that built the wall surrounding parts of the Gaza Strip, told Bloomberg that “Gaza has become the showroom for the company’s ‘smart fences,’ as customers appreciate that the products are battle-tested.” For Israel’s arms industries, the Great Return March, which began two weeks before Koresh spoke to Bloomberg, likely gives them an opportunity to develop new means to put down demonstrations, and to sell these new products abroad.

Korush’s remarks can be found in a new report put out by Hamushim, a joint project of Coalition of Women for Peace and American Friends Service Committee, which works to expose the true human price of the Israeli military industry and arms trade, as well as to mobilize against it. The report, titled “A Lab and a Showroom: The Israeli Military Industries and the Oppression of the Great March of Return in Gaza,” details the new weapons Israel used against the protesters, as well as the attempts to profit from them.

The newest weapon used against protesters on the Israel-Gaza fence has been “Sea of Tears,” a drone that can hold and drop tear gas canisters. The drone was originally designed by Da Jiang Innovations (DJI) and was adapted by Aeronautics, an Israeli company that specializes in reconnaissance drones, following a request by Border Police Commander Kobi Shabtai. According to Israel Police Spokesperson Micky Rosenfeld, the drone was used in the weeks leading up to the demonstrations; once they began, it was used much more frequently.

“Beyond the fact that it neutralizes all danger to our forces, it allows us to reach places that we had yet to reach,” Shabtai told Channel 2 news. Hamushim’s report, however, states that despite the army’s claims that the drones allow for better accuracy, in at least one case the army dropped tear gas canisters on a tent full of women and children in Gaza. Another video shows a scene in which gas canisters are dropped on journalists covering the protests.

Following the first day of protests in late March, likely due to the drones’ “success” in suppressing the protests, the Administration for the Development of Weapons and Technological Infrastructure, known in Hebrew as Ma’fat, purchased hundreds of drones. “We operated quickly and made immediate purchases of many drones from abroad,” a nameless source from Maf’at told Ynet. “We learned how to improve their response during the fighting. Our first task was to use drones as a platform for ‘non-lethal’ weapons. We conducted field tests around the clock and developed a combat doctrine. The drones are a groundbreaking tool, easy to operate, and have tremendous operational potential.”

According to Hamushim’s report, the use of drones for monitoring protests was first used by the Jerusalem municipality to track Palestinian demonstrators who tried to damage the city’s light rail, following the murder of Muhammad Abu Khdeir in 2014. In May of this year, the Defense Ministry issued a tender to develop drones that would replace the ones produced by DJI.

Drones developed by Aeronautics are already being used to disperse protests. In Gaza, Aeronautics drones were used to spray “skunk water,” a foul-smelling liquid, at demonstrators. On May 16th, two days after the IDF killed over 60 protests, the Defense Ministry released a video on Twitter showing off its latest development: the “Shocko Drone” — a UAV that is able to release bags containing skunk water. Israeli financial newspaper Calcalist confirmed that the drone was manufactured by Aeronautics, and a day before the Twitter update, the company signed a contract with the Croatian Ministry of Agriculture valued at 4.87 million euros.

Aeronautics drones have also been used to shoot down so-called “fire kites” that are sent from Gaza. According to the report, there have been reports of drones firing warning shots at groups of Palestinians preparing to launch “burning balloons” at Israel. The Israeli government denies using drones to harm people.

In June, Israel Aerospace Industries (IAI) showed off a new grenade-carrying drone that could “commit suicide” on enemy targets to a foreign customer. The drones can fly ten kilometers, spend half an hour in the air, and it are so light that a single soldier can carry three of them at once. That same week, it was reported that the IAI signed a deal with the German army to provide it with $600 million worth of drones.

The report warns that the “use of drones to attack is a dangerous strategy that can be used in the future against protestors and passerby civilians in Palestine, without any accountability.” These drones, says the report, have the ability to “re-shape the reality in the occupied territories. Today, Israel already sells those drones, for example, to five different armies using them in Afghanistan. However, use in Gaza and in the West Bank are new developments.”

The report ends by describing the scene that took place on May 15th, a day after the bloody protests at the fence. Israeli magazine Israel Defense put on a conference titled “Fire, Maneuvering, and Intelligence in a Complex Environment” at the Tel Aviv Convention Center, with around 1,000 Israeli security officials, members of the Israeli military industries, and foreign representatives. Among the keynote speakers were Yoav Galant, who previously headed the IDF Southern Command during Operation Cast Lead in 2008-2009, former IDF Chief of Staff Moshe Ya’alon, and Maj. Gen. Kobi Barak, the Commander of GOC Army Headquarters.

At the conference, sponsored by Elbit Systems, Aeronautics, and others, attendees enjoyed a fancy cocktail party and learned about the latest developments in Gaza. According to the report, “the elaborate expo reveals that in times of conflicts, as Palestinians grieve, the Israeli military industry continues their business as usual, aggressively marketing their products, signing new deals, and mingling with government officials.”

Meron Rapoport is an editor at Local Call, where a version of this article first appeared in Hebrew.