You Are Here: Home → How Israeli doctors enable the Shin Bet’s torture industry 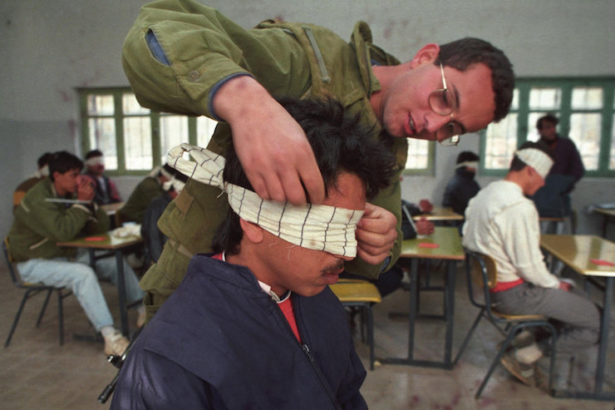 From approving brutal interrogation techniques to writing false medical reports, doctors in Israel have taken an active role in the torture of Palestinian prisoners.

By Ruchama Marton, Reposted from +972 Magazine

If the Shin Bet runs a school for its agents and interrogators, the curriculum most certainly includes a class on how to tell a lie. The texts taught, it seems, do not change with the years. In 1993, responding to accusations that the Shin Bet brutally tortured Palestinian detainee Hassan Zubeidi, then Commander of the IDF Northern Command Yossi Peled told Israeli journalist Gabi Nitzan that “there is no torture in Israel. I served for 30 years in the IDF and I know what I am talking about.”

Twenty-six years later, Deputy Chief of the Shin Bet and former Shin Bet interrogator, Yitzhak Ilan repeated the same line to news presenter Ya’akov Eilon on national television while speaking about Samer Arbeed, a 44-year-old Palestinian who was hospitalized in critical condition after he had been reportedly tortured by the Shin Bet. Arbeed is suspected of organizing a deadly bombing that killed a teenage Israeli girl and wounded her father and brother at a spring in the West Bank in August. Ilan bristled at the notion that the Shin Bet was somehow responsible for Arbeed’s condition.

Putting aside these absurd forms of denial, as a doctor and founder of Physicians for Human Rights – Israel, I have always been troubled by how Israeli doctors cooperate with and enable Israel’s torture industry.

In June 1993, I organized an international conference in Tel Aviv on behalf of PHR against torture in Israel. At the conference, I presented a Shin Bet medical document that had been discovered by chance by Israeli journalist Michal Sela. In the document, the Shin Bet doctor was asked whether the prisoner in question had any medical restrictions when it came to keeping them in isolation, whether they could be tied, whether their face could be covered, or whether they could be made to stand for prolonged periods of time.

The Shin Bet denied such a document ever existed. “There is no document. It was simply an experimental paper that is not in use,” the agency claimed. Four years later, a second document, suspiciously similar to the first, came to light. That document asked doctors to sign off on torture in accordance with several previously agreed-upon clauses.

The first document, along with other findings, were published in the book titled “Torture: Human Rights, Medical Ethics and the Case of Israel.” The book cannot be found in Israel; Steimatzky, Israel’s oldest and largest bookstore chain, has banned its sale. Perhaps this is further proof that there is no torture in Israel.

After the document was uncovered, PHR turned to the Israel Medical Association and asked it to join the struggle against torture. The IMA requested that PHR hand over the names of the Shin Bet doctors who signed off on the document so that they could be dealt with internally.

I refused to hand over the names and told the IMA attorney that I was not interested in going after rank-and-file doctors — I wanted to change the entire system. That meant doing away with legitimacy granted to confessions exacted under torture, educating IMA members about non-cooperation with torturers, and particularly providing active help to those doctors who do report on suspicion of torture or brutal interrogations.

Back then, the IMA was satisfied with putting our statements while doing nothing to prevent the Shin Bet’s doctors from cooperating with torture. Furthermore, the organization failed to fulfill its obligation to establish a forum for doctors to report on suspected torture.

An ethical, moral, and practical failure

But it is not only doctors in the Shin Bet and the Israel Prison Service that collaborate with torture. Doctors in emergency rooms across Israel write false medical opinions in accordance with the demands of the Shin Bet. Take, for example, the case of Nader Qumsieh from the West Bank city of Beit Sahour. He was arrested in his home on May 4, 1993 and was brought to Soroka Medical Center in Be’er Sheva five days later. There a urologist diagnosed him a hemorrhage and a torn scrotum.

Qumsieh testified that he was beaten during his interrogation and kicked in his testicles.

Ten days later, Qumsieh was brought before the same urologist for a medical examination, after the latter had received a phone call from the Israeli military. The urologist wrote a retroactive letter (as if it had been written two days earlier), without actually conducting an additional examination of the patient, in which he said that “according to the patient, he fell down the stairs two days before he arrived in the emergency room.” This time, the diagnosis was “superficial hematoma in the scrotal area, which corresponds to local bruises sustained between two and five days prior to the examination.” The urologist’s original letter, written after the first examination, disappeared from Qumsieh’s medical file.

History teaches us that doctors everywhere easily and effectively internalize the regime’s values, and many of them become loyal servants of the regime. That was the case in Nazi Germany, in the United States, and in various countries in Latin America. The same goes for Israel. Qumsieh’s case, along with countless others, reflects the ethical, moral, and practical failure of the medical establishment in Israel vis-à-vis torture.

Already back in the 18th century, jurists — rather than doctors — published legal opinions accompanied by proof that there is no connection between causing pain and getting to the truth. Thus, both torture and confessions exacted through pain were legally disqualified. One can only assume that the heads of the Shin Bet, the army, and the police know this bit of history

And yet, torture — which includes both mental and physical cruelty — continues to take place on a large scale. Why? Because the real goal of torture and humiliation is to break the spirit and body of the prisoner. To eliminate his or her personality.

The legal understanding for forbidding torture is based on the utilitarian idea that one cannot arrive at the truth through inflicting pain . But doctors are committed — first and foremost — to the idea that anything that causes physical or mental harm to a patient is prohibited.

The Shin Bet medical eligibility document allows for sleep prevention, it allows interrogators to expose prisoners to extreme temperatures, to beat them, to tie them for long hours in painful positions, to force them to stand for hours until the vessels in their feet burst, to cover their heads for prolonged periods of time, to sexually humiliate them, to break their spirits by severing their ties to family and lawyers, to keep them in isolation until they lose their sanity.

The Shin Bet’s medical eligibility form is not the same as the one used to check eligibility to join the air force or even to drive a car. This kind of “eligibility” leads the prisoner directly into the torture chamber — and the doctor knows this. The doctor knows to what kind of systematic process of pain and humiliation he or she is lending their consent and approval. It is doctors who oversee the torture, examine the tortured prisoner, and write the medical opinion or the pathology report.

The white robe passes through the torture chamber like a lurking shadow during interrogations. A doctor who cooperates with Israel’s torture industry is complicit in that very industry. If a prisoner dies during interrogation, the doctor is an accomplice to his or her murder. Doctors, nurses, medics, and judges who know what is taking place and prefer to remain silent are all accomplices.

We must unconditionally oppose all forms of torture — without exceptions. We, citizens of a democratic state, must refuse to cooperate with the crime of torture, and all the more so when it comes to doctors.

We must also not hide behind the idea that torture is a symptom of the occupation while telling ourselves that the practice will disappear when the occupation ends. Torture is a worldview according to which human rights have no place or value. It existed well before the occupation and it will continue to exist if we do not change that worldview.

Violent and cruel investigative practices do not benefit national security even if they are committed on its behalf. Torture causes a spiraling destruction of our very social fabric. Not only do those who carry out this terrible kind of “work” lose the values of morality, human dignity, and democracy, but also all those who remain silent, unwilling to know. In fact, all of us.

Dr. Ruchama Marton is the founder of Physicians for Human Rights – Israel. This article was first published in Hebrew on Local Call. Read it here.

RELATED:
Special Report: Israel’s Treatment of Americans
Torture, Israeli-style – as described by the interrogators themselves