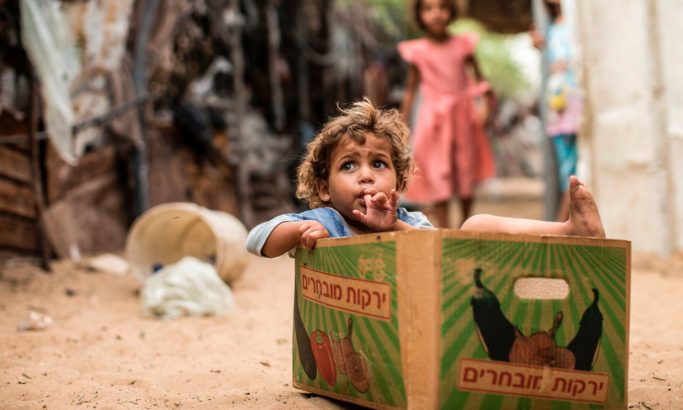 Because of Israel’s abusive policies, the human rights situation in Palestine and for Palestinians is alarming. (Pictured: a child in Gaza City. Photograph: Mahmud Hams/AFP/Getty Images.)

Through the years, numerous humanitarian organizations have produced detailed reports on the situation in Israel-Palestine. Below are some of them.

While both the Israeli and Palestinian governments have committed human rights violations, the Israeli abuses have been far more numerous, significant, and causative.

Moreover, many Israeli abuses are directly connected with Israel’s decades-long military occupation of the West Bank and Gaza, theft of Palestinian land, and imprisoning of Palestinians behind a barrier – all of which violate international law – as documented in the reports below.

In addition, it is important to remember that Israel was established in 1948 through a war of ethnic cleansing, as an Israeli historian and many others have documented. It is also important to be aware that Israel’s claim that it is in danger from Palestinian attacks is also inaccurate.

The relative quantity, chronology, and circumstances of the deaths (documented here) among both populations reflect the disproportionate power of the Israeli military over Palestinian resistance groups. Again, we find, the U.S. media regularly distort this reality.

This sampling of yearly fatality statistics illustrates the asymmetry:

Save the Children: Trapped–The Impact of 15 years of blockade on the mental health of Gaza’s children (June 2022)

Canadians for Justice and Peace in the Middle East (CJPME): Who Is Talking About Israeli Apartheid? – a list (not exhaustive) of notable organizations and individuals who have recently adopted, or expressed openness toward, the terminology of Israeli apartheid.

United Nations Human Rights Council: Report of the Special Rapporteur on the situation of Human Rights in the Palestinian territories occupied since 1967 (March 2022).

Defense for Children International-Palestine: 2021 is deadliest year for Palestinian children since 2014 (December 2021)

Military Court Watch: Israeli Solitary Confinement of Children (December 7, 2021) “Palestinian children have been forcibly transferred from the West Bank to prisons inside Israel for 54 years and subjected to solitary confinement during interrogation for at least 30 years, possibly much longer. To date there has been no accountability.”

“Since the Second World War, the transfer of civilians, including detainees, out of occupied territory has been prohibited under the Fourth Geneva Convention.”

UNICEF states: “In no circumstances whatsoever should a child be held in solitary confinement.”

“Since January 2019 there has been a surge in the use of solitary confinement in cases involving children with the evidence disclosing a rate of 19.7 percent between 2019 and May 2021, with the trend continuing to rise. It is estimated that at this current rate, between 100 to 200 children are now being held in solitary confinement each year…..” Read more – More information here.

Airwars, a UK-based nonprofit that tracks and documents civilian harm in conflict zones: “Why did they bomb us?” Urban civilian harm in Gaza, Syria and Israel from explosive weapons use” (December 2021)

Airwars, a UK-based nonprofit that tracks and documents civilian harm in conflict zones:  Map of Civilian Casualties in Gaza, May 10th–20th 2021

B’Tselem, the Israeli Info Center for Human Rights in the oPt: State Business: Israel’s misappropriation of land in the West Bank through settler violence (November 2021)

Defense for Children International-Palestine: No Way to Treat a Child (ongoing)

B’Tselem, the Israeli Info Center for Human Rights in the oPt: Soldiers Hold Your Fire: On unlawful gunfire against protesters in the Return Marches in Gaza (June 2018, updated October 2021)

No Way to Treat a Child: Report: Isolated and Alone (December 2020)

UN: No Thanksgiving for the Palestinian children of Gaza: Israelis deprived them of $16.7B, potable water (November 2020)

Yesh Din, Israeli human rights organization: The Occupation of the West Bank and the Crime of Apartheid: Legal Opinion (July 2020)

B’Tselem, the Israeli Info Center for Human Rights in the oPt: Shoot and abandon: 155 amputees and 27 paralyzed in two years: How Israel punishes those who dare protest the siege of the Gaza Strip (January 2020)

UN: Report of the Special Rapporteur on the situation of human rights in the Palestinian territories occupied since 1967 (October 2019)

B’Tselem, the Israeli Info Center for Human Rights in the oPt: Fake Justice: the responsibility Israel’s High Court justices bear for demolition of Palestinian homes and dispossession of Palestinians (February 2019)

B’Tselem, the Israeli Info Center for Human Rights in the oPt: After a year of protests in Gaza: 11 Military Police investigations, 1 charade (2019)

B’Tselem, the Israeli Info Center for Human Rights in the oPt: If the heart be not callous: On the unlawful shooting of unarmed demonstrators in Gaza (April 2018) (summary here)

B’Tselem, the Israeli Info Center for Human Rights in the oPt: Minors in Jeopardy: violation of the rights of Palestinian minors by Israel’s military courts (March 2018)

Christian Aid: Christian Aid condemns the killing of our partner volunteer in Gaza (2018)

UN: Human Rights in Palestine and Other Occupied Arab Territories: Report of the United Nations Fact-Finding Mission on the Gaza Conflict (September 2009)

National Institutes of Health: Cases of child malnutrition double in Gaza because of blockade (March 2002)

If Americans Knew is a nonprofit organization dedicated to giving Americans the facts on Israel-Palestine. The organization particularly focus on information largely missing from U.S. media reports.