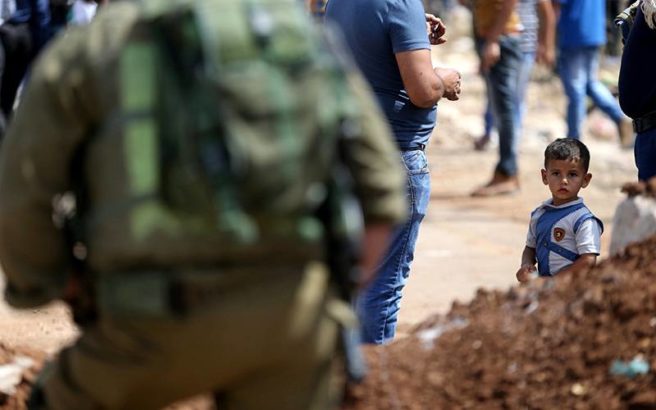 An Israeli soldier stands guard during a protest against the closure of the entrance of the West Bank village of Beta, near Nablus. REUTERS/Mohamad Torokman

According to WAFA, at least two Palestinians were killed, and more than 37 others injured today by live bullets or rubber-coated rounds. Israeli forces attacked the thousands of protesters taking part in the weekly Great March of Return at Gaza-Israel border, according to medical sources. Soldiers guarding the separation fence […]

A Palestinian farmer sustained injuries in the head, on Friday night, when he was brutally assaulted by extremist Jewish settlers near the village of Artas, to the south of Bethlehem, in the occupied West Bank, local sources said. Settlers from the Israeli settlement bloc of Gush Etzion reportedly broke into […]

In its daily campaign of detaining Palestinians from throughout the occupied West Bank, Israeli forces detained, Wednesday night, into Thursday morning, at least 6 Palestinians, according to the Palestinian Prisoner Society (PPS). The army detained early this morning 2 Palestinians from Beit Kahel village in the southern West Bank district […]

The Israeli Occupation Forces detained, early Monday morning, 28 Palestinians from their homes, after soldiers invaded their homes in the occupied West Bank, reported the Palestinian Prisoner Society (PPS). The PPS said the army detained 7 men from the Hebron district, including Thayer Halahleh who spent several years in Israeli […]

The Detainees and Ex Detainees Commission, Monday, warned that 2 Palestinians held in Israeli jails are critically ill and 1 of them may die. Commission director, Qadri Abu Bakr, told WAFA that Sami Abu Diak and Bassam Sayeh suffer serious deterioration in their health and that 1 of them may […]

Dozens of Palestinians suffered the severe effects of teargas inhalation, on Wednesday evening, after Israeli soldiers attacked them when they intercepted a group of illegal colonialist settlers who invaded their lands, and burnt olive trees, in Madama village, south of the northern West Bank city of Nablus. Ehab al-Qet, a […]

A hoard of armed Jewish settlers, on Monday, appropriated and bulldozed a Palestinian-owned tract of agricultural land in Beit Jala town, west of Bethlehem in the occupied West Bank. Local official Hasan Berijiya said that bulldozers, escorted by a group of settlers carrying weapons, stormed the agricultural area of al-Makhrour […]

Israeli soldiers abducted, on Tuesday evening, two Palestinians in the towns of al-‘Isawiya and Silwan, in occupied East Jerusalem. The Wadi Hilweh Information Center in Silwan (Silwanic) has reported that the soldiers abducted a man, identified as Mohammad Mousa Mheisin, in his fifties, while standing in front of a shop […]

The Israeli authorities in the occupied West Bank, issued three orders for the illegal annexation of Palestinian lands in Beit Jala city, Teqoua’ and Rashayda towns, in Bethlehem governorate, south of occupied Jerusalem in the West Bank. Hasan Breijiyya, the coordinator of the Wall and Colonization Commission in Bethlehem, said […]

Israeli authorities, on Tuesday, demolished a Palestinian house in al-Tur town, east of Jerusalem, under the pretext of unlicensed construction. Homeowner Mohamed Abul Hawa said that Israeli police forces and municipal employees demolished his 90-square-meter house in the town because it was built with no permit. Abul Hawa added that […]

Dozens of Palestinian citizens suffered from exposure to tear gas, in Madama village, to the south of Nablus, during confrontations with Israeli soldiers and settlers. Village chief Ihab al-Qut said that a hoard of Jewish settlers from the illegal settlement of Yitzhar, in Nablus, stormed the southern area of the […]

Israeli authorities in Jerusalem forced a Palestinian homeowner to demolish his own home, using only hand tools, on Wednesday. Jamil Masalmeh told reporters that he was in mourning for his home, which he was forced to demolish on Wednesday or else pay a 48,000 NIS fine. His home is located […]

Israel Is Not America’s Ally