You Are Here: Home → Israel has arrested over 50 thousand children since 1967 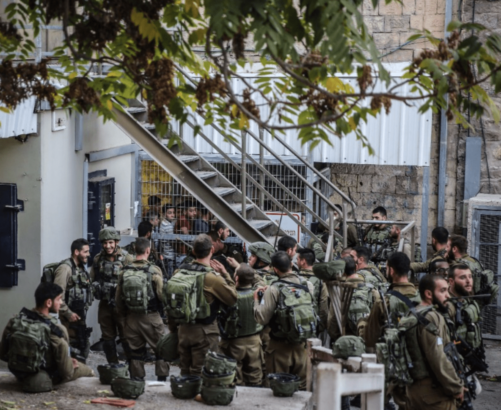 On October 13th 2017, 16 children and 2 adults were ambushed and arrested in Hebron by the Israeli soldiers. They were detained in a cage at checkpoint 56,  cable-tied,  kicked, and hit, then transferred to an Israeli police station where they were subjected to further physical and psychological violence. All were eventually released without charge, after threats were made to their families. (From Christian Peacemaker Teams)

More than 50,000 Palestinian children in the occupied West Bank have been detained by Israel since 1967, according to the Palestinian Commission of Detainees and Ex-Detainees Affairs.

reposted from The New Arab

Since 1967, Palestinian children in the Occupied Palestinian Territory have been living under Israeli military law and prosecuted in military courts.

In the West Bank, there are two separate legal systems operating in the same territory. The sole factor in determining which laws apply to a person is his or her nationality and ethnicity.

Israel is the only country in the world that automatically prosecutes children in military courts that lack basic and fundamental fair trial guarantees. Since 2000, at least 8,000 Palestinian children have been arrested and prosecuted in an Israeli military detention system notorious for the systematic ill-treatment and torture of Palestinian children.

“Around 500-700 Palestinian children are arrested, detained and prosecuted in the Israeli military court system each year.

The majority of Palestinian child detainees are charged with throwing stones, and three out of four experience physical violence during arrest, transfer or interrogation. No Israeli child comes into contact with the military court system.]

Israel has arrested more than 50,000 Palestinian children since it began its occupation of the West Bank more than 50 years ago, new research has revealed.

According to data released by the Palestinian Commission of Detainees and Ex-Detainees Affairs, more than 50,000 arrest cases among Palestinian minors were documented in the occupied West Bank since 1967, including 16,655 cases of child arrests since the Second Intifada which broke out in 2000.

Head of research in the Commission of Detainees and Ex-Detainees Affairs, Abdel Nasser Farawneh released the figures whilst speaking in the two-day fifth European conference on Palestinian prisoners.

The conference took place in Brussels on Saturday and addresses Israel’s systematic use of prisons as a part of its brutal occupation of Palestine.

Farawneh added arrests of children are part of Israel’s methodical policy to diminish any chance Palestinian children may have of living a normal childhood.

Israel has occupied the West Bank since 1967. More than 600,000 Israelis live in settlements in the occupied West Bank and East Jerusalem.

All Israeli settlements across the occupied West Bank are classed as illegal under international law, particularly Article 49 of the Fourth Geneva Convention, which asserts that “the occupying power shall not deport or transfer parts of its own civilian population into the territory it occupies”.

Israeli forces and settlers routinely attack Palestinians in the occupied territories, demolishing their homes, poisoning their livestock and vandalising their properties.

Editor’s note: The U.S. Congress is poised to give Israel a minimum of $38 billion over the next 10 years – approximately $23,000 per Jewish Israeli family of four.

Synopsis of the Israel/Palestine Conflict

Testimonies from some of the 8,000 Palestinian children Israel has imprisoned (since 2000)