You Are Here: Home → WATCH: Yes, Israel does arrest children 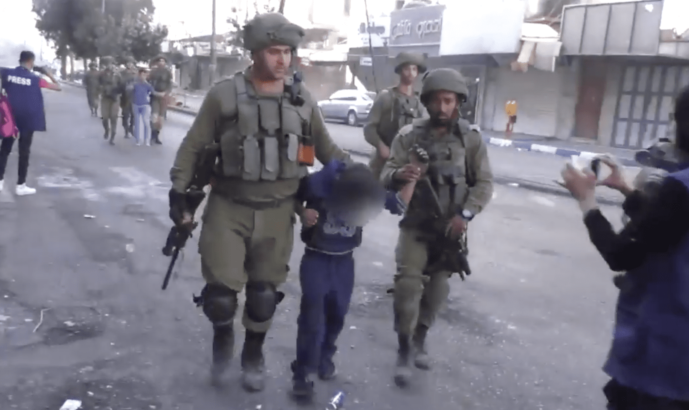 Eighteen youths, most under the age of 18, were arrested for throwing stones at soldiers on 13 October 2017. They were locked in a cage, blindfolded during interrogations, and not allowed access to their families or lawyers until their release that night.

Intellectual honesty is about confronting those things that make us uncomfortable, not ignoring them. Israel arrests Palestinian children; see 7 of the many videos of these actions. The U.S. gives Israel over $10 million per day, and Congress is currently considering bills to give Israel even more. That makes it obligatory for Americans to learn the facts, and act on them.

A few days ago, I posted on Facebook a video of Israeli soldiers arresting a 10-year-old Palestinian boy.

Israeli soldiers routinely torture, abuse, and threaten Palestinian children, and force them to sign confessions written in Hebrew, which they can’t read. Naturally the child’s father tried to stop the soldiers, to spare his son. The father was beaten up.

A friend of mine who advocates for Israel left this comment:

I don’t put much credence in these videos. I believe a lot of this is staged and/or the result of persistent provocation.

This is America, where freedom of speech is a thing (unless you try to criticize Israel), so my friend is allowed to express his doubts.

“Provocation” is an interesting word. Is provocation something that only Palestinians do? Do 110+ years of ethnic cleansing qualify as provocation? Does a 50-year occupation fall under that heading? How about restriction of movement, restriction of worship, of speech, of assembly? How about generations of humiliation, lost hope, and neglect? Starvation and oppression? (These questions are not rhetorical.)

Not saying it [arrest of minors, assault on adults] doesn’t happen. However, I’ve seen videos of the provocation, too.

I’ll admit, I’ve seen a video that could be considered provocation by a Palestinian. Her name is Ahed Tamimi, and she slapped and kicked a soldier. She was arrested and spent 8 months in prison.

Why did she do it? Her cousin Mohammad had just been shot in the face by an Israeli soldier, and was hanging onto life by a thread. Ahed was angry that day, my friends. And not just because of this isolated incident, horrific as it was.

For the last 9 years or so, Israel has made life in Ahed’s town, Nabi Saleh, almost intolerable: Residents receive just 12 hours of running water a week, while nearby Israeli settlers – who live on land confiscated from the villagers – have running water 24/7. Israeli soldiers raid Nabi Saleh almost every day; sometimes they spray homes with skunk water. Ahed Tamimi’s home has been raided at least 150 times.

That sounds a little provocative.

My friend offered a video as proof that you can’t trust what you see Palestinians doing on the internet.

He also explained that he needed more proof before he’d believe that Israel made a habit of arresting children.

I submit the following videos – just a few of the many that are available – for my friend’s perusal, and for anyone who believes that Israel has “the world’s most moral army.”

In 2018, Israel arrested 5,700 Palestinians, including 980 children and 175 women, according to the Palestine Prisoners’ Centre for Studies. And there are smartphones everywhere, so it’s reasonable to expect some arrests would be filmed.

Well, without further ado, here are 7 short videos of Palestinian children having their childhood stolen from them. (I wonder whether they will grow up well-adjusted and friendly towards Israel?)

To my Zionist friend: you can reject these if you need to, but watch them first.

No, seriously, watch them all the way through.

The first video was published by Christian Peacemaker Teams, an organization that has had a continuous presence in the West Bank since 1995. The org exists to bear witness to injustice. CPT workers witnessed and filmed the arrest of several young boys in 2014.

This 2013 video is of a 5-year-old boy being arrested for throwing a stone at the tire of an Israeli settler’s car. When the child’s father came, Israeli soldiers handcuffed and blindfolded him. (Additional pertinent details of the incident can be found here, from Ynet News, the English-language edition of Israel’s largest news website.)

Here is a 7-year-old boy being violently detained in 2014. According to the International Solidarity Movement, several boys were throwing stones at a checkpoint before school. Israeli forces threw two stun grenades and fired approximately three tear gas canisters towards the children. Several men tried to intervene and were pushed around; one was put into a headlock as he tried to help the hysterical 7-year old.

The next video, filmed in 2017 by the well-known Israeli rights group B’tselem, appeared in the Independent. The story of the detention (in a small cage) of 18 Palestinian children and youths was conveniently lost amid the controversy over a soccer player’s tweet of the video. Israel partisans, including the IDF, were critical of the tweet, but not of how the children were treated. (You need to click on this link to view the video.)

Next, we have an 8-year-old boy swarmed by Israeli soldiers. (Look at the upper left corner of the screen grab below – see the machine gun pointed at the boy’s head? Have you noticed how very many Israeli soldiers seem to be involved in every one of these child-arrest incidents? What’s that about?) This video is from B’tselem, 2017.

Here we see the IDF has arrested 4 children, ages 5 to 9, for allegedly throwing burning tires at the soldiers. The video came out in 2013 from Israel Social TV, an independent media organization that “sees itself as part of the human rights and social change community in Israel.”

And last, Israeli soldiers detained a 3-year-old child, as filmed and published in 2018 by a Palestinian journalist who writes for the Jewish news website Mondoweiss. The Israeli newspaper, Ha’aretz, adds detail: soldiers cursed at the boy; he ran home, and soon returned with a zucchini scraper. Israeli Police claimed that the incident “was intended to paint the security forces in a bad light.” (Notice, the problem isn’t the detention of a 3-year-old, but how it made Israeli soldiers look bad.) A police spokesman further rationalized the soldiers’ actions by calling the incident “a stabbing attempt.”

(Note: that video is no longer available from its original source, but it can be viewed here.)

Many, many more videos like these are available for the watching.

What does one do with such information, especially if one is a supporter of Israel? There are a few options:

Each of these choices comes with its own set of challenges.

The first two choices will nag your subconscious. Ignoring and disbelieving these spectacles will rob you of serenity because on some level, you know. You face a lifetime of cognitive dissonance – or maybe you’re already acquainted with CD, and this just adds another layer of denial.

The third choice will give you discomfort of another type. There’s something deeply repugnant about the idea that Israel is arresting toddlers, even if (you think) Afghanistan and Saudi Arabia might be doing it too.

The last choice, believing, is difficult too: it means the death of idealism, the shaking of ground that you thought was solid. The choice to believe things that you don’t want to be true is not a one-time experience – it is the beginning of a new journey, a journey of leaving untenable beliefs behind and embracing new principles based on reality. It’s a tough undertaking, but once you take that first step, you’ll know it’s right.

Now if you’re reading this and haven’t watched those videos yet, scroll up and start watching. All of them.

Kathryn Shihadah is a staff writer for If Americans Knew. She blogs at Palestine Home.

Congress is currently voting on legislation that would finalize a $38 billion package to Israel, the largest such aid package in U.S. history. This is about $23,000 per Jewish Israeli family of four and amounts to $7,230 per minute. The Senate bill would also impede our right to boycott and contains additional measure on behalf of Israel. To learn more and to take action go here.

What ‘Israel’s right to exist’ means to Palestinians