You Are Here: Home → Is slapping a soldier in the face worse than shooting a child in the face? 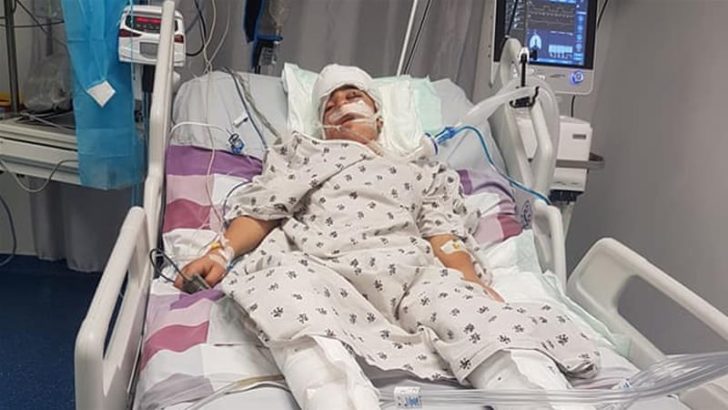 Many in Israel and mainstream media seem to consider slapping an Israeli soldier in the face a more notable offense than shooting a Palestinian child in the face.

An Atlantic article that contained much valuable information about the situation nevertheless buried and minimized the shooting of a boy, mentioning it in one paragraph low in the story.

Below is some information many mainstream media are omitting:

Mohammed Tamimi is about 15 years old (some reports said he was 14). He was unarmed and posed no risk to anyone when an Israeli soldier a few meters away shot him in the face. The bullet entered Mohammed’s face below his nose. It broke his jaw and then lodged in his skull. According to a witness, “The blood was pouring from his face like a fountain.”

With difficulty due to Israel’s many military checkpoints on Palestinian land, the teen was eventually taken to a hospital, where he underwent a six-hour procedure involving seven surgeons. The doctors removed the bullet, reconstructed his jaw and put him into an artificial coma for 72 hours.

A Ha’aretz article reports: “The left side of his face is twisted, swollen, fragmented, scarred; there’s congealed blood by his nose, stitches in his face; one eye is shut, a seam line stretches across his whole scalp. A boy’s face turned scar-face. Some of his skull bones were removed in surgery and won’t be returned to their place for another six months.”

The fact that a soldier shot a boy in the face from close range would normally be the focus of a news story. Since this soldier was Israeli, the boy was Palestinian, and this kind of atrocity is a fairly frequent occurrence in Palestine, it was barely mentioned.

In fact, if Mohammed’s cousin hadn’t then slapped a heavily armed, combat-ready soldier invading her home (which had earlier been tear-gassed), almost no one would even know about Mohammed.

And now, instead of a soldier facing trial for shooting an unarmed boy in the face, it is a 16-year-old girl and her mother who are facing years in prison.

One high Israeli minister said they “should end their lives in jail.”