You Are Here: Home → Nikki Haley sets the bar low on her Friends of the US party 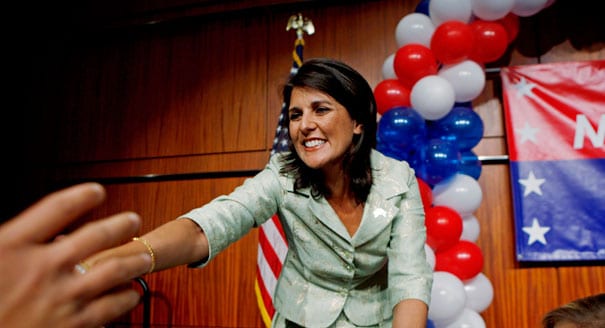 Nikki Haley’s tweet: “It’s easy for friends to be with you in the good times, but it’s the friends who are with you during the challenging times that will never be forgotten. Thank you to the 64.”

What if the US Ambassador to the UN had a party for all of America’s true friends? The room might be pretty empty.

U.S. Ambassador to the United Nations Nikki Haley hosted a “Friends of the US” reception Wednesday to thank the 64 brave diplomats who didn’t scold Donald Trump for his over-the-top Hanukkah gift to his bro, Bibi Netanyahu.

There were three levels of guests at the party, really.

First, the VERY welcome guests – those who voted with the US, against the resolution. Numero Uno, of course, Israel: “Israel completely rejects this preposterous resolution. Jerusalem is our capital. Always was, always will be,” explained Netanyahu.

The other heavyweight nations that proudly stood with the United States were Guatemala, Honduras, Togo (“Africa’s Best-Kept Secret”) and the wee island states of Micronesia, Nauru, Palau, and the Marshall Islands. As USA Today put it, “Four of the countries – Marshall Islands, Micronesia, Nauru, and Palau – have combined populations less than Boise, Idaho.” This massive amalgamation, this force to be reckoned with, standing arm-in-arm with America, has a total population of less than one half of one percent of the world’s population (about 3.7 million).

Let’s take a look at the size of those countries:

That’s why Nikki needed to invite another level – the “SORT OF welcome guests” – to her party. These were the abstainers. The thirty-five countries that stayed on the proverbial fence. You have to give them credit, though, for their creativity: Australia claimed it abstained because unilateral action was a bad idea, and a UN resolution wouldn’t help anyway. Canada said it abstained because the resolution did not fully acknowledge the three monotheistic faiths’ ties to Jerusalem. But hey, at least they didn’t vote against the US. And they scored an invitation to the party!

It still wasn’t going to be much of a crowd, so Nikki took another look at her naughty/nice list (remember, she was “taking names”). And that’s how the no-show countries also got an invitation. Because nothing says “I don’t not support you” like failure to attend an emergency session of the United Nations General Assembly.

Netanyahu put a positive spin on the truancy of those twenty-one countries: “I do appreciate the fact that a growing number of countries refused to participate in this theater of the absurd.”

Nikki Haley tweeted her thanks to “the 64” (that is, the 8 + 35 + 21 AWOLs) after the party: “It’s easy for friends to be with you in the good times, but it’s the friends who are with you during the challenging times that will never be forgotten.”

We’ve all faced challenging times like this, when we’ve chosen to take the High Road, knowing it might be a lonely walk. We warned our colleagues that if they didn’t join us, we’d abandon them in their hour of need; we threatened that there would be a price to pay for those who refused to join us on our noble journey. And then we’ve walked proudly – and nearly alone. The world may have judged us, but we knew they were wrong and we were right. And those courageous few whom we could bribe to join us, and the equally courageous few who couldn’t make up their minds or who stayed home – their friendship will be forever valued.

President Trump, whose announcement on December 6 had been the original impetus for the party (the first domino that caused the emergency session), made a pre-taped video address to the little group. As always, DT was eloquent and succinct:

“Rest assured that your actions on Thursday, December 21, will go down as a very important date.”

Trump then shared his fantasy with the group:

“The United States remains committed to achieving lasting peace between Israel and the Palestinians. There’s no reason that peace should not be entered into. We will continue to work with the partners like you to ensure a peaceful and prosperous future for the region, for the people, for the world.”

Because with one-half of one percent of the world’s population, there’s literally nothing you can’t accomplish.