You Are Here: Home → “Birthright Exodus” is a sign of hope 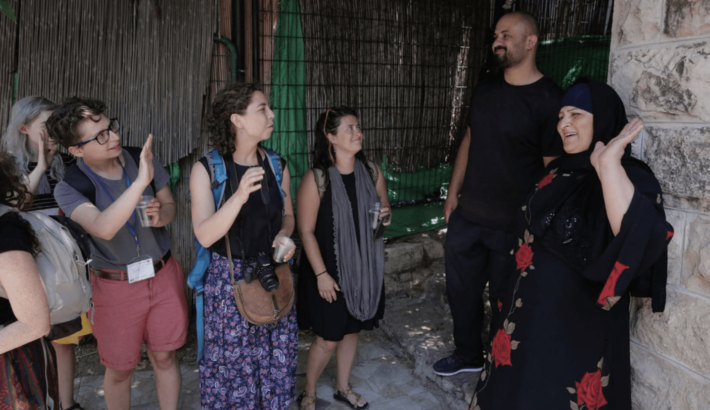 As more and more young American Jews recognize Israel’s unethical policies, Birthright Israel is becoming a moment of truth. Those who speak up and/or walk away are prioritizing the value of justice. These are future leaders in the struggle for justice for Palestinians.

Birthright Israel, a program in its 20th year, has been bringing Jewish young adults on free trips to Israel for an overwhelmingly pro-Zionism, anti-Palestinian perspective on “their homeland.”

The Birthright program, available to Jews all over the world between 18 and 26 years of age, promises a “life-changing trip to Israel” in which they will explore their Jewish identity, build bonds with the Jewish State, and spark friendships with Israelis. The program sees its participants as a vehicle for “transforming the Jewish future.”

Since its founding in 1999, Birthright has brought 650,000 young men and women on free, 10-day trips to Israel, funded entirely by donors.

Birthright claims that it is “apolitical” and that it “reject[s] the promotion of any agenda” and “respect[s] our participants’ abilities to form their own opinion.”

But, as with many ideals in Israel, the reality is the opposite.

The Birthright program is funded in large part by supporters of Israel’s right-wing government. Ultra-right-wing Sheldon and Miriam Adelson have contributed more than $200 million; billionaire patron Lynn Schusterman has worked with AIPAC for decades. Israel itself donates $40 million each year.

Birthright insists that these high-profile, hawkish donors do not influence the content of the tours.

Yet in 2011, when the liberal pro-Israel organization J Street, announced it would be offering its own Birthright tour, Birthright organizers countered with a statement that J Street was ineligible to lead trips because it was a “political” organization.

As one trip participant put it, “Birthright has joined the fight for the political loyalties of young Jews. It invites travelers to ‘explore Israel without being force-fed ideology,’ but you don’t have to be [Marxist philosopher] Althusser to know that ideology almost always calls itself nonideological.”

All Birthright tour leaders are Israeli, meticulously trained by Israel’s Ministry of Tourism (US-based staff also receive rigorous instruction). Once this is completed, guides have the freedom to create personalized trips based on their own interests and strengths. Themed tours include culinary, arts, spiritual, and LGBTQ culture.

Gaza is off limits, as are “restricted areas” of the West Bank. Some groups enter “areas labeled as West Bank which are deemed safe for tourist travel.”

In Tours That Bind: Diaspora, Pilgrimage, and Israeli Birthright Tourism, sociologist Shaul Kelner describes Birthright tours as primarily “fun and good feeling,” which serves to divert attention from the topic of politics. At least, most of the time (see below.)

One progressive rabbi explains that, while some tour guides privately lean to the left,

There is a tremendous fear about speaking honestly and openly about these Israeli, about Palestinians struggles, about these complexities, because you could lose your job…In the name of loving Israel, we have created a firewall to protect Israeli politicians and Israeli policies that I believe are ultimately undermining Israel’s Jewish and democratic nature.

Birthright hosted over 24,000 trips in the summer of 2018, the vast majority of which went smoothly. But 3 of them ran into trouble – and may be a turning point for the program.

In June 2018, 5 Birthrighters tried to engage their tour guide in discussion of the occupation, but to no avail. They walked off their trip and joined a Breaking the Silence tour of Bethlehem and Hebron. One of the deserters stated, “It is morally irresponsible to participate in an institution that is not willing to grapple with reality on the other side of the wall.”

Two weeks later, 8 more Birthrighters left their group in City of David National Park, which is built on land confiscated from Palestinians. They joined a Peace Now activist and visited the home of a Palestinian family that was about to be evicted – by the same IDF whose members had befriended them on the bus.

One of those who left the tour explained, “We think that part of the story is the occupation, and unfortunately Birthright will not show us this reality. They try to leave the occupation out of the story.” Another added, “They gave us a map of Israel that doesn’t have the West Bank borders depicted on it.”

Kicked off the bus

On Monday, IfNotNow posted a video on its Facebook page, showing 3 Jewish young people being expelled from their Birthright tour bus. It seems their questions about the occupation and the separation wall were grounds for dismissal. Watch their story:

This “Birthright exodus” trend may be small right now, but it is important.

As Michelle Alexander said last week in the New York Times, we should look to Martin Luther King’s example and “honor our deepest values in times of crisis, even when silence would better serve our personal interests or the communities and causes we hold most dear.”

That is what the young Birthrighters chose to do when they spoke up about Palestine; it is what too few adults are willing to do.

For those who know the issue and disapprove of Israeli policies, too often the safety of silence is irresistible.

These young adults – and there will certainly be more – who are willing to rise up for Palestine are a sign of real hope. They are disillusioned with Israel; they know injustice when they see it, and refuse to make excuses. They embrace the risk because justice is among their deepest values.

The younger generation may accomplish what hasn’t been done in 70+ years simply because they desire justice more than convenience.

Opinion: Birthrighters can handle the truth. Show them the occupation.