You Are Here: Home → How Did Israeli Elections Get So Racist? 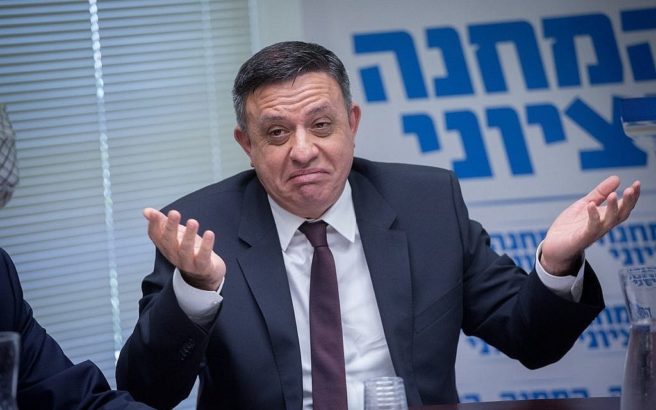 Head of the Zionist Union political party Avi Gabbay leads a faction meeting in the Knesset in Jerusalem on March 12, 2018. (Miriam Alster/FLASH90)

Israeli politicians all seem to share a platform plank of vitriol and threats toward Palestinians. Their campaign ads are full of mocking, insults, and accusations against Palestinians. It’s been like this for years, and it’s worse now than ever. And it’s not good for Israel.

by Elizabeth Tsurkov, the Forward

A disturbing new trend has emerged in the political ads of the Israeli elections. Campaign ads seem to be competing over which candidate has killed the most Palestinians.

These ads are horrifying. But they also tell us a lot about what — and who — is at stake in the current elections.

The election campaign materials, particularly the ones glorifying killing and destruction, tell us that this election, like others in the recent past, will be waged within the right-wing bloc over the votes of right-wingers, and they are predicated on the belief that Israeli right-wing and even centrist voters do not feel empathy toward Palestinians. And in an effort to stave off accusations of being “leftists,” the Israeli Center is increasingly adopting violent rhetoric.

Worse, the effects of these tactics don’t disappear with the elections. The extremist messaging, which increases with each election, undermines social cohesion between Jews and Arabs, as well as what’s left of Israel’s democratic institutions.

Already at this early stage in the election cycle, there are two campaign ads in which Israeli leaders boast about being responsible for the assassination of Hamas militants. One is by political newcomer Benny Gantz of the Israel Resilience Party and one by Avi Dichter of Likud.

Meanwhile, Likud MK Yaron Mazuz, who apparently lacks a Palestinian he can claim to have killed, presented his ad’s viewers with Elor Azaria, the soldier caught on camera executing an incapacitated Palestinian assailant in Hebron. Azaria’s military trial, conviction and incarceration for nine months were deeply unpopular among Jewish Israelis. The ad concludes with the line “Elor Azaria has joined me, you join too!”

While Azaria can claim credit for killing just one Palestinian, a second, chilling and slickly produced ad by Benny Gantz features a body count bragging about the number of militants killed in the 2014 Gaza War — “Operation Protective Edge” — which Gantz oversaw.

In addition to killing people, another theme that has emerged in the 2019 campaign is the glorification of the destruction and dispossession of Palestinian property. One of the first campaign ads released by Gantz’s party bore the title “6,231 targets destroyed – parts of Gaza returned to the Stone Age.”

Palestinians as expendable, liars, a people without a history

Other campaign ads call for even greater destruction and killing. A campaign ad by The New Right, the breakaway party headed by ministers Naftali Bennett and Ayelet Shaked, attacks Gantz for risking the lives of Israeli soldiers in order to reduce casualty numbers among Palestinians. The ad labels Gantz as “weak Left” and presents the The New Right’s alternative: “It is better to be hit with condemnations for killing those launching flaming kites [from Gaza toward Israeli agricultural fields] than to cry over the death of Israeli children.”

Other campaign ads demonize, ridicule and belittle Palestinians, who are presented as a people without history, pathological liars and terrorists. In a new campaign video, Dichter “goes undercover” as a Palestinian father who seeks employment for his son. An actor playing the Palestinian President Mahmoud Abbas offers the son the opportunity to become a terrorist and receive Palestinian Authority stipends given to militants jailed or killed by Israel. Dichter then “exposes” himself to Abbas and brags about a law he, Dichter, proposed that would deduct the stipends paid out by the Palestinian Authority from taxes collected on behalf of the PA by Israel.

In another campaign video involving costumes, the husband of MK Anat Berko of Likud dresses up as a Palestinian who kidnaps Berko. In the video, Berko takes pride in “fighting domestic and foreign [Palestinian] terrorists” and their “incitement, lies and propaganda.” As proof that the Palestinians never had a state of their own, Berko mocks the Arabic language and pronunciation.

A primaries campaign video by Tzipi Hotovely, also of Likud, features a Knesset plenum speech she gave, in which she presented a book filled with empty pages. That book, according to Hotovely, presents the history of the Palestinian people. As she clutched the book, Hotovely proclaimed: “You have no Kings, no heritage sites” in Israel.

Palestinian legislators as terrorists and trash

In an ad produced by Yaron Mazuz of Likud, the MK boasts that he “fought the Arab MKs and called to revoke the citizenship of [Member of Knesset] Hanin Zoabi, the [MV Mavi] Marmara terrorist.” In a campaign video produced by MK Nava Boker of Likud, Boker boasts, “I did not remain silent when the Arab members of Knesset undermined our state.” The ad includes her speech in the Knesset plenum calling Arab MKs “the faction of Hamas present in the Israeli Knesset” and “terrorists,” adding that they belong in Gaza.

An entire article could be devoted to the antics of popular Likud MK Oren Hazan. Hazan, who has been implicated in running a casino in Bulgaria and possibly supplying drugs to his clientele, is facing assault charges for beating a public servant. He often relies on Facebook Live video to communicate with his tens of thousands of subscribers, and in one such video released during the campaign season, he calls the Palestinian members of Knesset “terrorists” and repeatedly refers to the head of the Balad Party, MK Jamal Zahakla, as “Zahalkaka”, which can be translated as “shitty Zahalka.” Hazan describes in detail how he incited Likud members of the Knesset to spit on MK Hanin Zoabi of the Balad Party, spill water on her, push and curse her inside the Knesset’s plenum. For inciting this attack, MK Hazan was censured by the Knesset Ethics Committee, but he insists that he is proud of himself.

Other campaign materials focus on undermining pillars of Israel’s impaired democracy: the Supreme Court, the media, law enforcement institutions and civil society. And some of the advertising focuses on attacking the Israeli Left, an inconsequential political force in recent governments and the next one, according to polls.

Tactics used because they work

Each Israeli election cycle, new enemies are found, and old ones are resurrected: human rights NGOs, the Attorney General, Arab members of Knesset, the media. Every few years, Israelis ingest a concentrated dose of fear-mongering and demonization of Palestinians.

The new trend in these elections of glorifying destruction and killing of Palestinians is reflective of the lack of empathy toward Palestinians among large swaths of the Israeli electorate; campaign advisers, who rely on polls and focus groups, would not recommend them otherwise.

Any victory achieved through adopting such dehumanizing messaging is short-lived. In the long run, the only force benefitting from debasing and devaluing the lives of Palestinians is the ascendant Israeli Right.

Elizabeth Tsurkov is a Research Fellow at the Forum for Regional Thinking, a progressive Israel think-tank.