You Are Here: Home → Let’s talk about the text of Israel’s new Nation-State Law 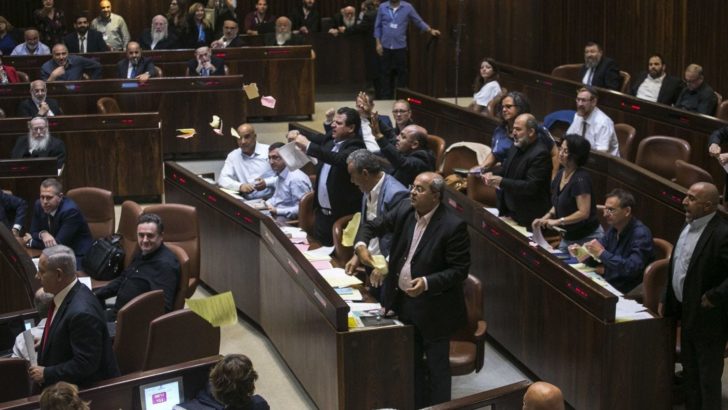 The newly passed Israeli Nation-State Law is strongly criticized by Palestinians for good reason: it enshrines the privilege Jewish Israelis already enjoy as their historic and national homeland and gives them exclusive right to self-determination; it names Jerusalem as a united capital; states its priorities of “ingathering exiles”; and prioritizes the creation of Jewish-only communities. The words Palestinian, equality, and democracy appear nowhere in the document; “Arabic” only appears in the context of downgrading the language from “official” to “special.” The law is a recipe for full-blown apartheid.

As soon as the Nation-State Law was passed in the Knesset (Israeli legislature) on Thursday morning, Palestinian-Israeli lawmakers “tore copies in protest, and were subsequently removed from the Knesset plenum hall.”

Palestinian leadership had some choice words for the law: “racist and apartheid,” “[paves] the way for ethnic cleansing,” “a declaration of war on the Palestinians’ land, rights, identity, and language,” “unleashes the arm of terrorism and racism,” and “the legitimization of hate and incitement.”

Other leaders asserted that the nation-state law “[exposes] the true face of the state of terrorism, fascism and racism,” that it is “an extension of racist and colonialist practices that aim at burying the rights of the Palestinian people,” and that Israel “continues to pose the biggest threat to world peace and security,”

Arab rights spokespersons stated that the law reflects “Jewish supremacy as the bedrock of its institutions” that serves the interests of one group, even if it comes at the expense of the most basic rights of another.”

Another speculated that such a law would never have passed without the complicity of the White House and the “silence of the international community.”

Is this law really as bad as Palestinians are making it out to be? After all, Israel is a state guided by principle – its Basic Laws guarantee civil rights and individual freedoms to its people – at least some of its people.

Israel’s Basic Law of Human Dignity and Liberty recognizes the value of humankind and the sanctity of life, and acknowledges freedom for all. Human dignity and liberty are considered “values of the State of Israel as a Jewish and democratic state” (emphasis added).

The “Jewishness” of this law might explain why non-Jewish citizens are often deprived of dignity and liberty: Palestinian rights, such as privacy, freedom of speech, and freedom from illegal search, are routinely violated.

(Fun fact: just below the Basic Law of Human Dignity and Liberty is another law called “Freedom of Occupation,” which guarantees every citizen the right to “engage in any occupation, profession, or trade.” Needless to say, Israel lacks a “Freedom from Occupation law.)

Below is the full text of the new Nation-State Law. We can judge for ourselves whether the law is as bad as Palestinians make it out to be.

Basic Law: Israel as the Nation State of the Jewish People

A. The land of Israel is the historical homeland of the Jewish people, in which the State of Israel was established.

This sounds accurate and innocuous enough. Everyone – even Palestinians – agrees that Jews originally came from the region in which Israel now exists. However, the statement does not mention the non-Jewish citizens of Israel (20% of Israel’s population is Palestinian) for whom the land is also their historic homeland.

B. The State of Israel is the national home of the Jewish people, in which it fulfills its natural, cultural, religious and historical right to self-determination.

The United Nations Charter urges self-determination for all people, and all Palestinians long for a national home – but Israel holds the cards. The game they play, round after round, involves Israel demanding, “say “Israel is a Jewish state.’ Say it, or we won’t negotiate with you.” The Palestinians’ turn consists of saying, “20% of Israel is not Jewish, and I will not abandon them. I will not say it. End the occupation.”

In case the discrimination was too subtle in 1B, it is repeated more transparently in part C:

C. The right to exercise national self-determination in the State of Israel is unique to the Jewish people.

This clause acknowledges 2 classes of citizens: “those to whom the state belongs and those to whom it doesn’t.” The 1.7 million non-Jewish people who also live in the State of Israel have no ownership, no national home in the land where they’ve lived for generations longer than most of the Jewish Israeli citizens.

For some time now, Palestinians have been rising up against this injustice and pushing for genuine equality and recognition. They resist oppression however they can: sometimes it’s in the form of a kite with a flaming tail; sometimes it’s rebuilding a demolished village 100 times, or writing poetry, or fishing, or turning spent tear gas canisters into flower pots. When they are provoked, rockets fly.

When Palestinians combat oppression, Israel conveys its dominance all the more explicitly. This clause lets Palestinians know that their rulers identify them as “other.”

2 — The symbols of the state

A. The name of the state is “Israel.”

B. The state flag is white with two blue stripes near the edges and a blue Star of David in the center.

C. The state emblem is a seven-branched menorah with olive leaves on both sides and the word “Israel” beneath it.

D. The state anthem is “Hatikvah.”

(The words to the national anthem are: “As long as within our hearts the Jewish soul sings, As long as forward to the East, to Zion, looks the eye – Our hope is not yet lost, it is two thousand years old, To be a free people in our land, the land of Zion and Jerusalem.”)

E. Details regarding state symbols will be determined by the law.

If you weren’t yet sure whether Jews are really privileged in Israel, you should be now.

3 — The capital of the state

Jerusalem, complete and united, is the capital of Israel.

This topic has been a source of open hostility since December 2017, and has simmered below the surface for decades. It was not enough for Israel to occupy East Jerusalem in 1967, then to annex it in 1980. Israel has chosen to also insult, disenfranchise, and render hopeless the whole Palestinian population by declaring that there is no longer even a Palestinian “side” of the city. It is all, east to west, the capital of Israel.

In this climate, Palestinian designs on East Jerusalem as a future capital of a future state will not see the light of day.

A. The state’s language is Hebrew.

B. The Arabic language has a special status in the state; Regulating the use of Arabic in state institutions or by them will be set in law.

C. This clause does not harm the status given to the Arabic language before this law came into effect.

Although the Arabic language has always been neglected by Israeli government institutions, for 70 years at least it was labeled an “official language.”  “Special status” is a demotion, and is likely to result in an even lower level of esteem.

According to some Arabic language teachers in Israel, Jewish high school students have no interest in learning what they see as the “language of the enemy.” An exception is those students ID’ed as future military intelligence. They are often trained in Arabic to the point of proficiency to enable them to infiltrate and spy on Palestinians.

5 — Ingathering of the exiles

Once again the elephant stands, unacknowledged, in the middle of the room. 750,000 Palestinians were exiled from their homes and their land between 1947 and 1948. This clause in the Nation-State Law unequivocally declares them unwelcome to return (in spite of UN Resolution 194), while at the same time swinging wide the door to members of the privileged majority. 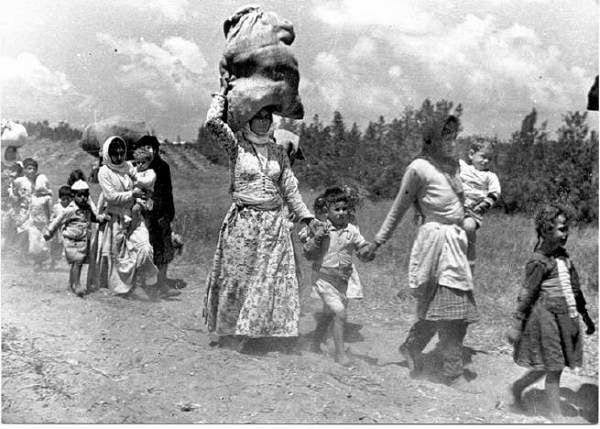 6 — Connection to the Jewish people

A. The state will strive to ensure the safety of the members of the Jewish people in trouble or in captivity due to the fact of their Jewishness or their citizenship.

B. The state shall act within the Diaspora to strengthen the affinity between the state and members of the Jewish people.

C. The state shall act to preserve the cultural, historical and religious heritage of the Jewish people among Jews in the Diaspora.

The state views the development of Jewish settlement as a national value and will act to encourage and promote its establishment and consolidation.

If any clause in this new law is bald-faced apartheid, this has to be the one. As +972mag points out, Israel already has legal ways to keep “undesirables” out of communities. But now, segregation is legalized as a national treasure.

(And on the other side of the coin, Israeli policy consecrates the demolition of Palestinian communities within the State.)

A. Independence Day is the official national holiday of the state.

B. Memorial Day for the Fallen in Israel’s Wars and Holocaust and Heroism Remembrance Day are official memorial days of the State. 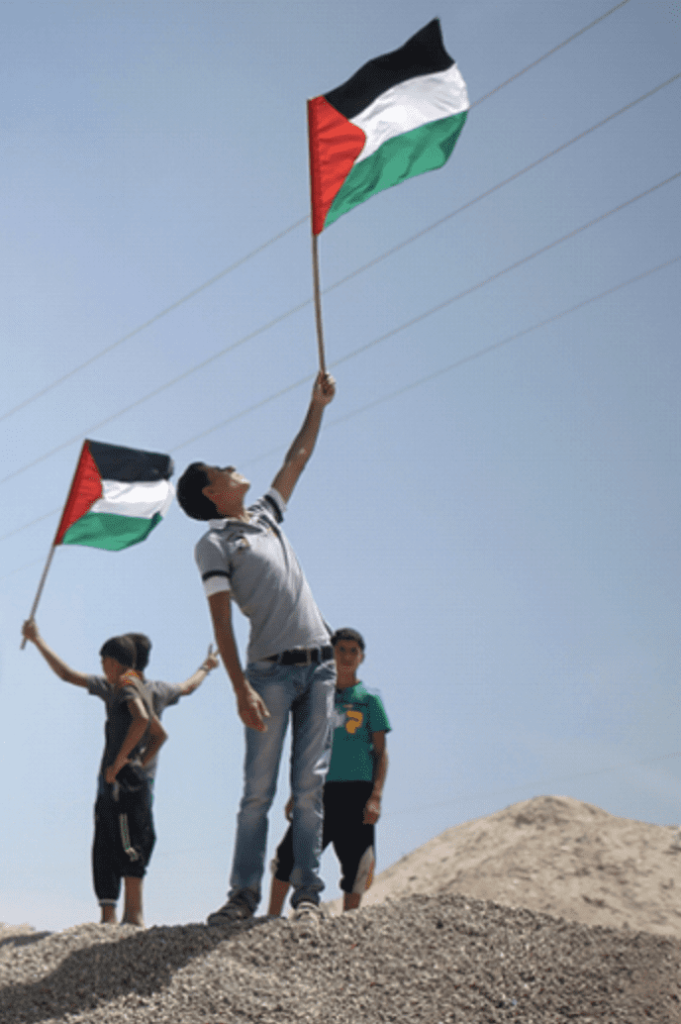 This would be an apprropriate place to mention the 2011 Nakba Law, which authorizes Israel to withhold funding from any institution that “rejects the existence of Israel as a ‘Jewish and democratic state’ or observes “Israel’s Independence Day…as a day of mourning.”

Since 1948, Palestinians have understandably commemorated the day of Israel’s creation (on Palestinian land) as a national day of mourning. They have continued to observe Nakba Day – with financial reprisal, as the law promises – and denounced the law as a violation of their freedom of expression and their right to preserve their history and culture.

The Sabbath and the festivals of Israel are the established days of rest in the state; Non-Jews have a right to maintain days of rest on their Sabbaths and festivals; Details of this issue will be determined by law.

This Basic Law shall not be amended, unless by another Basic Law passed by a majority of Knesset members.

As long as the majority of legislators are Jewish and right-leaning (some Jewish Knesset members do fight for Palestinian rights), this Basic Law won’t be going anywhere. There is no reason to expect enough local or international pressure to do otherwise.

(It is worth noting that the words “equality” and “democracy” do not appear anywhere in the law.)

It’s not as if there is no other way to run a country.

In June, Joint List party, made up mostly of Palestinian legislators, proposed the State of All its Citizens bill. This piece of legislation aspired to “anchor in constitutional law the principle of equality for every citizen, while recognizing the existence and rights of two national groups, Jews and Arabs, who live within the state’s internationally recognized borders.”

This concept was so absurdly foreign to the powers that be in Israel, that it was not even sent to the legislature for discussion.

Another alternative to the Nation-State Law was proposed: the Democratic, Multi-Cultural, and Egalitarian State law. It too never saw the light of day.

By now it should be clear why Palestinians are infuriated about the Nation-State Law, why they tore their copies in pieces after the law was passed, and why some called it “a declaration of war on the Palestinians’ land, rights, identity, and language.” 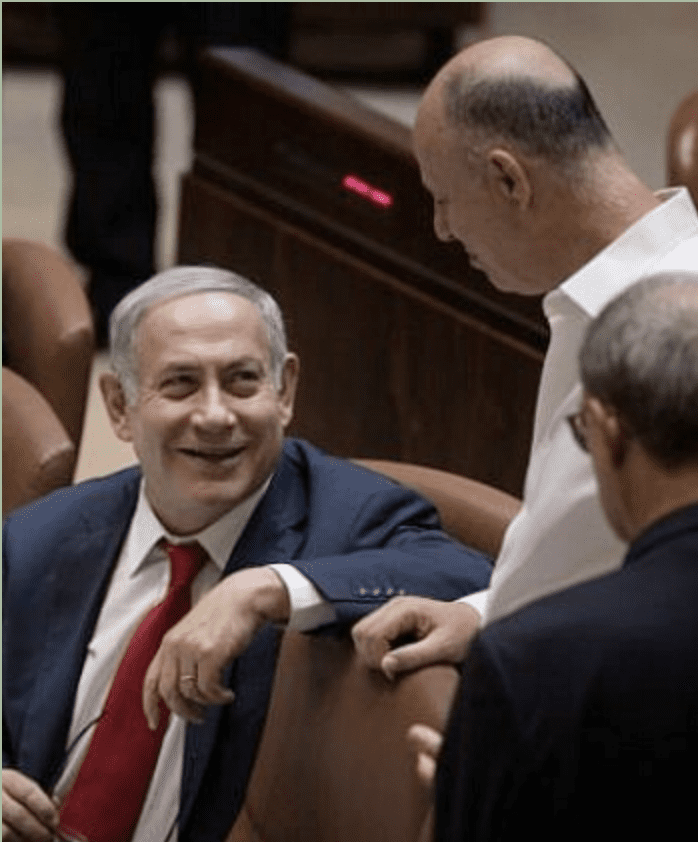 Meanwhile, Prime Minister Netanyahu announced, “this is a defining moment in the annals of Zionism and the history of the state of Israel.”

Which may be why some Palestinians have begun calling on the United Nations to reestablish a resolution from 1975, which was repealed in 1991, declaring that “Zionism is racism.”

If the Nation-State Law is a defining moment in Zionism, then Zionism is indeed racism.