You Are Here: Home → Israel Approves The Illegal Annexation of Palestinian Lands Near Ramallah

Israel Approves The Illegal Annexation of Palestinian Lands Near Ramallah 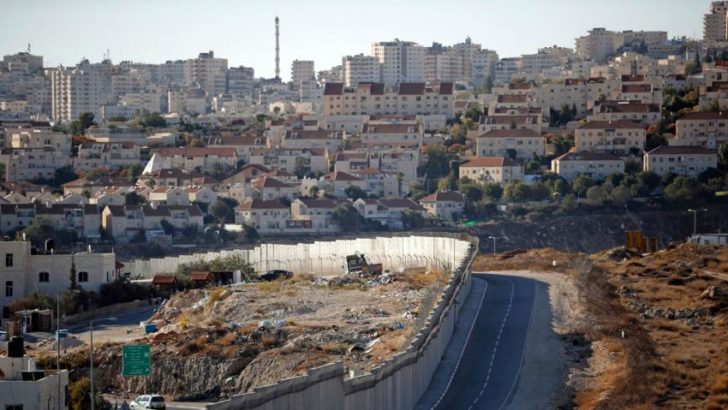 Israel has appropriated about 80 acres of Palestinian land for a settler-only road. It is expected to spawn more settlement neighborhoods, resulting in the theft of even more Palestinian land. This practice is leading the region to an environment in which a 2-state solution is impossible.

The Israeli authorities announced the illegal annexation of hundreds of dunams of Palestinian lands in order to pave a new segregated road linking between the illegal colonies of Ofarim and Beit Aryeh, built on private lands, west of the central West Bank city of Ramallah.

The Land Research Center (LRC) of the Arab Studies Society issued a statement, Thursday, revealing that the Israeli decision was made earlier this month, and aims at activating a structural plan, dubbed as 6/201, which aims at the illegal annexation of 324 Dunams of Palestinian lands in the al-Lubban al-Gharbi, northwest of Ramallah, and ‘Aboud village, west of the city.

The LRC said that the structural plan aims at linking the two colonies, regarded by Israel as one settlement, by paving a new road, creating a constant geographic continuity, by illegally annexing more Palestinian lands.

It added that the plan would likely lead to the construction a new colonialist neighborhood on the sides of the new road, which will eventually create a large block, leading to more illegal annexation of Palestinian lands, and the isolation of Palestinian communities.

The LRC said that the new project, which declared the Palestinian lands as “state land” is an illegal measure that aims at surrounding and isolating the Palestinians, and stealing their lands for the benefit of Israel’s colonies, built in direct violation of International Humanitarian Law, the Fourth Geneva Convention and various resolutions and treaties.

Furthermore, the LRC said the new road will obstruct any natural growth of Palestinian towns, in addition to creating the illusion that the colonies are the original structures in the area, while the Palestinian communities are “just random constructions.”

It stated that all of Israel’s colonialist activities aim at foiling any attempt to establish a viable, continuous Palestinian state, and added that the “two-state solution is no longer feasible due to the ongoing Israeli obstacles and illegal policies.”