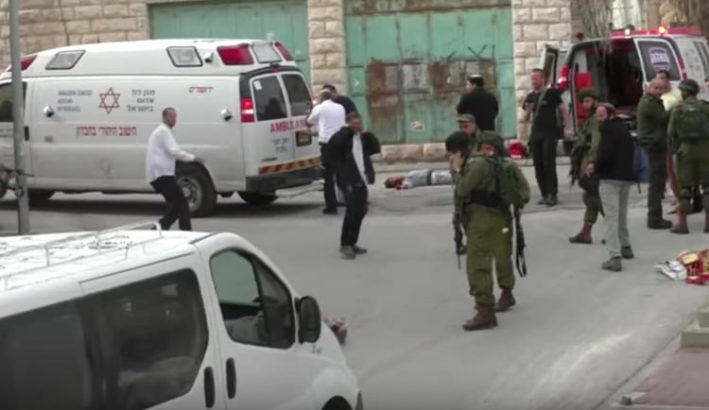 An Israeli Defense Forces soldier has been sentenced to 18 months in jail on a manslaughter conviction for shooting a Palestinian man in the head after he had already been disarmed and injured by other soldiers.

The incident occurred last year in the city of Hebron and was caught on video (scroll down to view) by Imad Abu Shamsiya.

Elor Azaria, a 19-year-old Israeli soldier, can be seen approaching Abdul-Fattah al-Sharif, 21, and firing a bullet into his head as he lays motionless on the ground. Despite this evidence, 65% of Israelis believe Azaria acted in self-defense.

What’s astounding about this is that a conviction actually occurred at all. In the last 16 years, Israeli occupation forces have killed over 5,500 Palestinians, but not a single Israeli soldier has been indicted for murder, and only one soldier has been convicted of homicide (the victim was British national Tom Hurndall, not a Palestinian).

Just seven cases resulted in an Israeli soldier being convicted of a lesser charge such as manslaughter, and information on how much jail time each offender served is not readily available.

Gideon Levy at Ha’aretz opined, “There’s nothing more Israeli than this court that gives a soldier, who killed a Palestinian in cold blood, a sentence fit for a bicycle thief.”

The Independent lists Palestinian children who have received longer prison sentences for throwing stones than this Israeli soldier did for killing an unarmed man:

A three-year Israeli military order enacted in 2015 dictates that throwing stones will result in a minimum four year, maximum 20 year prison sentence. The parents of children who throw stones can also be punished under the law.

Additionally, an internal IDF report from 2011 revealed that over 99% of the trials of Palestinians held in Israeli military courts resulted in a conviction for the accused.