You Are Here: Home → As Israel continues to kill children with impunity, urge lawmakers to support H.R. 4391 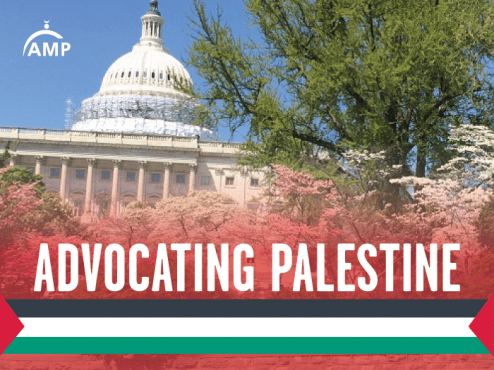 The American Muslims for Palestine is an American organization founded by Americans in 2006. Its sole purpose is to educate the American public and media about issues related to Palestine and its rich cultural and historical heritage, in the fervent belief that when Americans come to know how our tax dollars support the unjust occupation, they will pressure Congress to create a more balanced Middle East foreign policy that grants equal rights for everyone in the Holy Land.

It’s time to take action. Israel has a history of indifference toward Palestinian children’s lives, and now it is targeting and killing them in the Gaza March – with vocal support from its leaders.

We need to encourage legislators to cosponsor Rep. Betty McCollum’s H.R. 4391, the “Promoting Human Rights by Ending Israeli Military Detention of Palestinian Children,” which seeks to ensure that United States financial assistance to the Government of Israel is not used to support the detention of Palestinian children by Israeli forces.

from American Muslims for Palestine

As of May 6, at least 43 Palestinian peaceful demonstrators in Gaza have been shot dead by Israeli snipers since the Great March of Return began on March 30. Of those, at least 5 of those victims have been children, with hundreds more injured.

succumbed to his injuries after being shot in the head by Israeli forces. He died at the European Hospital in Gaza. A week before that, Israeli snipers killed and crushed the bones of another Palestinian child, a 14-year-old boy named Mohammad Ibrahim Ayyoub in the east of Jabaliya in northern Gaza. The photographer who filmed the death of Ayyoub said he saw the teen standing about 150 meters from the Gaza perimeter security fence. He observed Ayyoub attempting to take cover behind a low sand berm when he was shot and fell to the ground.

Following Ayoub’s state-sanctioned murder, Israeli Brigadier-General Zvika Fogel, the former chief of staff of the Israeli army’s “southern command,” said in a radio interview, “If [a] child or anyone else gets close to the fence […] his punishment is death. As far as I’m concerned, if you can only shoot him to stop him, in the leg or arm – great. But if it’s more than that then, yes, you want to check with me whose blood is thicker, ours or theirs.”

How You Can Help:

As you know, last fall Rep. Betty McCollum introduced H.R. 4391, the “Promoting Human Rights by Ending Israeli Military Detention of Palestinian Children” bill. The bill seeks to promote justice, equality and human rights by ensuring that United States financial assistance provided to the Government of Israel is not used to support the detention of Palestinian children by Israeli forces in a military detention system where ill-treatment is widespread and institutionalized.

1) Please contact your representative immediately to urge them to cosponsor H.R. 4391.

2) Call Jose-Manuel Dobarco, Foreign Affairs Officer and at the Department of State, who reviews Leahy Law violations for the Near East Affairs desk. Dobarco’s contact number: 202-632-2040.