You Are Here: Home → Trump Violates the Iran Nuclear Deal — Ignoring U.S. and Israeli Generals Who Support It 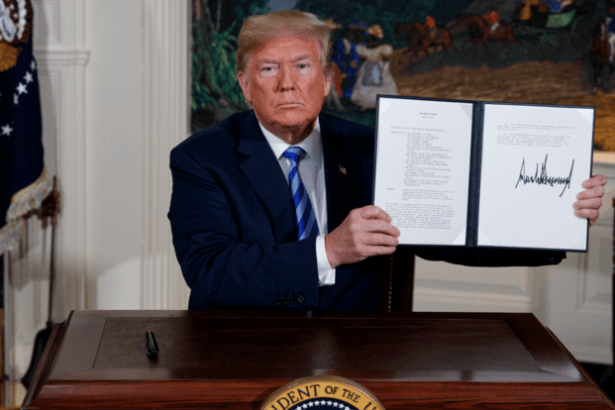 President Donald Trump holds up a signed Presidential Memorandum after delivering a statement on the Iran nuclear deal from the White House on May 8, 2018.

A star-studded list of generals and spy chiefs from both the US and Israel – none of whom are friends or fans of Iran – all agree that Iran is complying with JCPOA, and that the US should stay in the deal.

On the other side are a reality TV star; a radical who wants to bomb everyone; an Arab man-child who can’t win a war against rebels from the poorest Arab country; and an allegedly corrupt politician who has been claiming Iran is “three to five years” away from a nuclear weapons capability since … 1992.

This isn’t about security or protecting American — or Israeli — cities from Iranian missiles. Trump & Co. aren’t trying to avoid war with Iran. They want war with Iran.

by Mehdi Hasan, The Intercept

So he’s finally done it. Having spent the past three years denouncing the Iran nuclear deal as “horrible,” “disastrous,” and “insane,” Donald Trump arrived in the Diplomatic Room of the White House on Tuesday afternoon to formally announce that “the United States will withdraw from the Iran nuclear deal” and would “begin reinstituting U.S. nuclear sanctions on the Iranian regime.”

“This will make America much safer,” the president declaimed, jabbing his fingers at the assembled reporters.

Guess who’s celebrating the president’s decision to violate a nuclear nonproliferation agreement signed by the United States less than three years ago? His new national security adviser, John Bolton, a former paid speaker for an Iranian ex-terror group who has long been obsessed with “regime change” in Tehran; the crown prince — and de facto ruler — of Saudi Arabia, Mohammed bin Salman, who claims Iran’s supreme leader “makes Hitler look good”; and the prime minister of Israel, Benjamin Netanyahu, who constantly compares the Islamic Republic to the so-called Islamic State.

Don’t be fooled: This disastrous and unilateral decision by Trump won’t improve U.S. security. Or Israeli security, for that matter. Even card-carrying hawks who hate the Islamic Republic think Trump is mad to pull out of the Joint Comprehensive Plan of Action, or JCPOA, as the nuclear deal is officially known.

Because guess who won’t be celebrating? The entire U.S. military establishment: Defense Secretary James Mattis, who says he has read the text of the nuclear agreement three times and considers it to be “pretty robust”; Chair of the Joint Chiefs of Staff Gen. Joseph Dunford, who says, “Iran is adhering to its JCPOA obligations” and a U.S. decision to quit the deal “would have an impact on others’ willingness to sign agreements”; the head of U.S. Strategic Command, Gen. John Hyten, who says, “Iran is in compliance with JCPOA” and argues “it’s our job to live up to the terms of that agreement”; and the head of U.S. Central Command, Gen. Joseph Votel, who says the nuclear deal is “in our interest” because it “addresses one of the principle threats that we deal with from Iran.”

Then there’s retired Gen. Colin Powell, national security adviser to Ronald Reagan and secretary of state under George W. Bush, who has called the JCPOA “a pretty good deal.” And Trump’s own former national security adviser, soon-to-be-retired Gen. H.R. McMaster, who was “working closely with two key senators to prevent Trump from destroying the Iran deal” prior to being fired and replaced with Bolton in March.

Guess who else isn’t celebrating? The Israeli security establishment. Netanyahu may claim to possess thousands of “secret nuclear files” that show the JCPOA was “built on lies,” but Israel’s generals and spymasters disagree, including: the chief of staff of the Israel Defense Forces, Gen. Gadi Eisenkot, who says the deal “with all its faults is working”; the chair of the Israeli Space Agency and award-winning military scientist, Isaac Ben-Israel, who says “the agreement is not bad at all, it’s even good for Israel” because “it averts an atom bomb for 15 years”; the former director of the spy agency Mossad, Efraim Halevy, who says the JCPOA provides a “credible answer to the Iranian military threat, at least for a decade, if not longer”; the former chief of domestic security agency Shin Bet, Carmi Gillon, who says the nuclear agreement has helped “make the region, and the world, a safer place”; the former head of Israeli military intelligence, Amos Yadlin, who says “tearing up the deal would create a dangerous void”; and former Israeli prime minister — and the country’s most decorated soldier — Ehud Barak, who says withdrawing from the deal would be a “mistake.”

So let’s be clear: On the one side, we have a dizzying array of serving and retired generals and spy chiefs from both the United States and Israel, none of whom are friends or fans of Iran, yet all of whom agree that the Islamic Republic is complying with the stringent terms of the JCPOA, and that the United States should stay in the deal because it bolsters U.S., regional, and global security.

And on the other side? A former property developer and reality TV star; a chicken hawk who wants to bomb everyone; a 32-year-old Gulf prince who can’t win a war against rebels from the poorest Arab country; and an allegedly corrupt politician who has been claiming Iran is “three to five years” away from a nuclear weapons capability since … 1992.

This isn’t about security or protecting American — or Israeli — cities from Iranian missiles. Trump & Co. aren’t trying to avoid war with Iran. They want war with Iran.