You Are Here: Home → Israel would get far more than $38 billion under the new deal 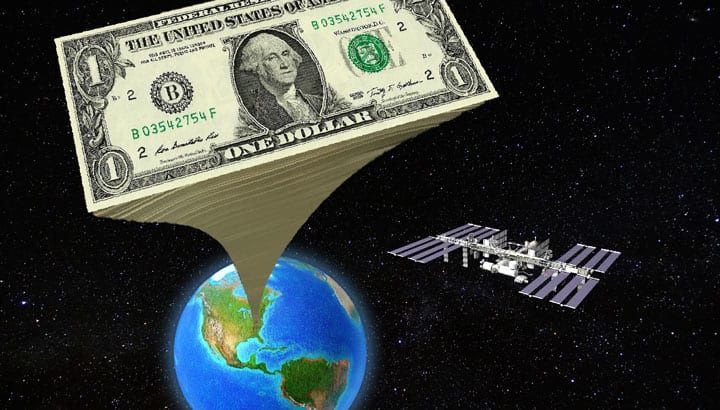 A stack of 3.8 billion dollar bills would reach the International Space Station. The new package to Israel will give Israel ten times that much money. An Israeli official gloated that the package was obtained “despite budget cuts, including defense cuts, in the U.S.”

In an unprecedented gift of our executive power to Israel, the House has passed for the very first time a law that forces the American president to give Israel a minimum of $3.8 billion per year. We have, in effect, crippled our ability to promote US interests in the Middle East. The new House version is even more generous to Israel than the Senate bill and the 2016 MOU… it amounts to $7,230 per minute to Israel, or $120 per second, and equals about $23,000 for each Jewish Israeli family of four.

The AIPAC sponsored bill that guarantees $38 billion to Israel over the next ten years is a dramatic departure from the deal offered under President Obama’s 2016 Memorandum of Understanding (MOU).[1] Passed by the House of Representatives on September 12, 2018, the United States-Israel Security Assistance Authorization Act of 2018 effectively rolls back every limitation that President Obama placed on the amount of aid we give to Israel.

In addition, the House version provides Israel even more perks than the version passed by the Senate on August 11.

Most dramatically, this new act would eviscerate the ability of President Trump and his successors for the next ten years to withhold United States aid to Israel. Historically, almost every president since Eisenhower has attempted to withhold such aid at one time or another in order to force Israel to the peace table or to stop Israel from committing human right abuses or illegal acts such as taking Palestinian land and giving it to Israeli settlers.

In an unprecedented gift of our executive power to Israel, the House has passed for the very first time a law that forces the American president to give Israel a minimum of $3.8 billion per year. We have, in effect, crippled our ability to promote US interests in the Middle East.

President Eisenhower was the last American President who managed to use this threat effectively, when he forced Israel to withdraw from Egypt’s Sinai Peninsula in 1957.

Notably, President George Bush Senior failed miserably to make good on his threat to delay aid to Israel when their actions threatened a possible peace agreement with the neighboring Arab countries, complaining that he was “just one little lonely guy” in his battle against pro-Israel lobbyists. (New York Times, 1991 article, “Bush Urges Delay On Aid For Israel; Threatens A Veto.” See also this.)

Aid to Israel likely to increase even more

The second most important effect of this act is in Section 103. While the MOU limits the amount of aid we give Israel to the amount agreed upon, in this case $38 billion over 10 years, Section 103 of the current bill removes all limitations on how much we give Israel. Under the new act, instead of 38 billion being the cap, as Obama stipulated in his 2016 MOU, we must now give Israel a minimum of $3.8 billion per year until 2028.

Without a cap, and with incessant lobbying by Israel and her proxies in the United States, the amount we give could conceivably double over the next 10 years. This is a huge coup for Prime Minister Netanyahu and quite a slap in the face to the Obama administration.

Section 106 will increase Israel’s access to a war-reserve stockpile by completely removing the limits on how many precision guided missiles we can give Israel. The existing law set a maximum of $200 million worth of arms from the stockpile per year, to be charged against the agreed aid package.

The House version of the bill differs from the Senate version, replacing the words “sell” and “sale” to “transfer,” which appears to open the door for more gifts in excess of the $38 billion. To put this in context, a Tomahawk Missile currently costs about $1 million. The media recently lambasted President Trump for using 60 such missiles in Syria because of the high cost.

Section 107 calls on the President to prescribe procedures for the rapid acquisition and deployment of precision guided munitions. The House text differs from the Senate version in that it removes all the detailed requirements for Israel to have such rapid acquisition. In the version just passed by the House, there is only one, extremely broad requirement, that Israel is under direct threat of missiles (in Israel’s opinion).

Section 108 of the Act authorizes Israel to export arms it receives from the U.S., even though this violates U.S. law. The Senate version included a provision calling on the President to make an assessment of Israel’s eligibility before adding Israel to the exemption list.

The House version deleted that requirement, and simply orders the American President to grant Israel the privilege. In fact, Israel is ineligible, having repeatedly made unauthorized sales in violation of this Act. The Export Act further forbids granting such an exemption to any country that is in violation of International Nuclear Non-proliferation Agreement, which Israel has refused to sign. Israel is known to be in possession of nuclear weapons, and hence in violation and ineligible for the export exemption. Congress thus reiterates the message that it will force the President to continue funding Israel even when that violates our laws.

Section 201 orders NASA to work with the Israel Space Agency, even though an Israeli space official has been accused of illegally obtaining classified scientific technology from a NASA research project. U.S. agencies periodically name Israel as a top espionage threat against the United States. The section also states that United States Agency for International Development (USAID) must partner with Israel in “a wide variety of sectors, including energy, agriculture and food security, democracy, human rights and governance, economic growth and trade, education, environment, global health, and water and sanitation.”

All countries except Israel are required to spend US military aid on American goods. This ensures that the American economy benefits to some degree from these massive gifts. (Of course, if americans wished to subsidize these U.S. companies, money could be provided directly to them, and Israel and other countries left to buy their equipment with their own money.)

In the past, Israel has spent 40 percent of U.S. aid on Israeli companies, at the expense of U.S. industry. Under Obama’s 2016 MOU, this percentage was to be decreased over the 10-year span, and eventually Israel’s unique right not to spend use U.S. military aid to purchase items from American companies was to be ended. The new Act eliminates this requirement, putting Israeli economic interests before our own.

Many in Israel criticized Prime Minister Netanyahu for his aggressive attempts to undermine President Obama’s Iran deal, fearing that it would anger the White House and result in a less favorable aid offer. Analysts were particularly worried about what might happen if Trump were elected, since in 2016 he had said that he expected Israel to pay back the security assistance it receives from the US.

Yet just two years later it looks like the Israeli Prime Minister will obtain everything he sought and more. This is not surprising, since Trump, under extreme political pressure, is increasingly pandering to hardcore Israel supporters like billionaire Sheldon Adelson and South Carolina Senator Lindsay Graham. (Graham is a top recipient of pro-Israel campaign donations.[2])

Netanyahu has demonstrated to the world that Israel can continue to act contrary to U.S. interests and still manage to get ever more military aid and greater concessions, greater access to U.S. secrets and technology, and greater control of U.S. foreign policy. An Israeli spokesperson crowed: “The landmark deal was reached despite budget cuts, including defense cuts, in the U.S.”

The bill now will go back to the Senate for approval, and then to Trump to be signed into U.S. law.

The $38 billion package amounts to $7,230 per minute to Israel, or $120 per second. And that’s before Israel advocates and ambitious politicians in our own country push it even higher.

Nicole Feied is an American writer and former criminal defense attorney, currently based in Greece. Alison Weir also contributed to the article.

[Americans who wish to object, may contact their Congressional representatives here. Informational cards to distribute about the bill, containing the top image, can be ordered or downloaded here.]

1. The bill was timed to be introduced just before AIPAC’s 2018 annual conference in Washington D.C., so that delegates could lobby their representatives while they were in D.C.

Sen. Lindsey Graham (R-SC) spoke bluntly about his plans for raising campaign funds for his prospective presidential campaign in an interview published today on “Washington Wire,” a Wall Street Journal blog. Over a glass of Riesling, according to the account, he answered a series of questions, including how he plans to finance his campaign.

He described “the means” as the biggest hurdle facing his potential campaign, adding:

When George Bush, Sr. took on the Israel lobby, and paid for it