You Are Here: Home → In under 24 hrs, Israeli soldiers kill 4 civilians (one a child) who posed no threat (and it’s not Friday)

In under 24 hrs, Israeli soldiers kill 4 civilians (one a child) who posed no threat (and it’s not Friday) 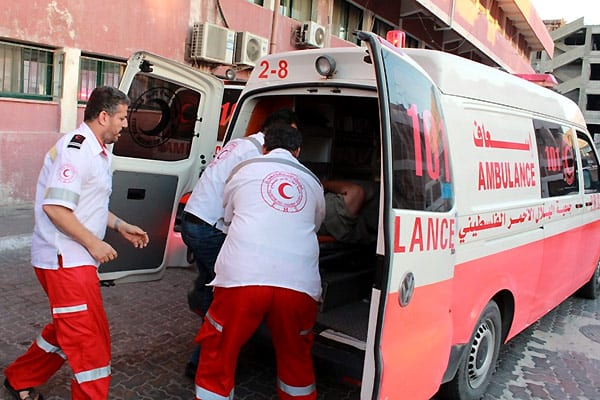 Excessive force, live bullets against unarmed civilians has been an Israeli military theme in 2018.

Israeli soldiers with live fire and tear gas, warplanes, and drones combined efforts to interrupt nonviolent actions near the Gaza border, resulting in 4 civilian deaths and dozens of injuries. Israel claimed that in one case, “saboteurs” approached the fence and “planted a suspicious object near it” (later refuted); in the other case, soldiers fired at a group of peaceful demonstrators.

PCHR calls upon the ICC Prosecutor to open an official investigation into these crimes and to hold accountable all those involved.

from Palestinian Center for Human Rights

Within less than 24 hours, Israeli forces killed 4 Palestinian civilians, including a child, and wounded 44 others, including 7 children, 2 women, 3 journalists and 2 paramedics, in 2 separate crimes.

The first was in the southern Gaza Strip, when Israeli warplanes launched missiles to kill 2 civilians; one of them was a child, without any justification or threat to the life of soldiers; the second was in the northern Gaza Strip when Israeli forces used excessive force against peaceful protesters near Beit Hanoun “Erez” Crossing.

PCHR’s investigations into the first case emphasize that the two killed were civilians who were present near the barbed-wire fence that is around 50 meters away from the main border fence.  Although no circumstances clarified the reason behind their presence in the scene, they did not pose any threat to the life of soldiers as both were unarmed; moreover, targeting them violates the principle of necessity and distinction. In the second case, the investigations indicate that the Israeli soldiers used lethal and excessive force against the peaceful protestors who posed no threat or danger to the life of the soldiers in the protests area.

According to PCHR’s investigations, at approximately 22:30 on Monday, 17 September 2018, the Israeli soldiers stationed along the border fence with Israel in eastern Khan Younis in the southern Gaza Strip opened fire at the area near the border fence in eastern al-Qararah, northeast of the city.  After around 20 minutes, an Israeli drone launched 2 missiles at the same area.  Later, the Spokesperson of the Israeli forces, Avichay Adraee, declared on twitter that a military drone “attacked saboteurs who suspiciously approached the security fence in the southern Gaza Strip and planted a suspicious object near it”.  However, this was refuted by the PCHR’s investigations.

At approximately 00:15 on Tuesday, an ambulance crew belonging to the Palestine Red Crescent Society (PRCS) arrived in the vicinity of the area, and the ambulances stopped at the end of Street 2 to the east.  After coordinating with the International Committee of Red Cross (ICRC), the ambulances started entering the border area and searching for possibly wounded persons.  Meanwhile, the Palestinian Liaison via phone directed the ambulance crew to where the two persons killed exactly was after the former’s contacted with the Israeli Liaison.

The PRCS crew said to PCHR’s fieldworker that at approximately 00:50 that near the barbed-wire fence established in the Palestinian territories, east of al-Qararah, that is around 50 meters away from the main border fence, they found two bodies of civilians dressed in civilian clothes.  One of them turned into pieces while the second was wounded with shrapnel throughout his body and features of his face was unclear due to the targeting.  The ambulance crew carried the two killed, taking them 300 meters away where the ambulances were parked.  They were then taken to Naser Hospital in Khan Younis.   Moreover, neither firearms nor suspicious objects were found near the bodies unlike what have been said by the Israeli Forces’ Spokesperson.

On Tuesday Afternoon, 18 September 2018, families of the 2 persons killed identified them after their photos were published on social media.  They were namely as Naji Jamil Hasan Abu ‘Aasi (17) and ‘Alaa Ziad Jamil Abu ‘Aasi (20); who are both from Bani Suhaila.

Though the circumstances have not clarified the reason behind their presence in the scene, they posed no threat to the life of Israeli soldiers as they were both civilians and unarmed, noting that the area was calm and did not witness any protests.  Moreover, many infiltrations into Israel for work there were reported in that area.

At approximately 17:00 on Tuesday, 18 September 2018, Israeli forces stationed at the Beit hanoun “Erez” Crossing in the northern Gaza Strip fired live bullets and tear gas canisters to disperse hundreds of civilians who were protesting near the crossing upon calls from the National Committee of March for Return and Breaking the Siege to participate in the “Together for the Rights of Refugees and Breaking the Siege” activity.

Moreover, 44 civilians, including 7 children, 2 women, 3 journalists and 2 paramedics, were wounded.  Seven of the wounded were hit with bullets while the rest were directly hit with tear gas canisters in addition to dozens who suffered tear gas inhalation.  Further, a tear gas canister hit and broke the window of a PRCS ambulance.

PCHR condemns these crimes which further prove that Israeli forces continue to use lethal forces against Palestinian civilians to kill them even though the later posed no threat to the life of soldiers.

PCHR emphasizes that continuously targeting civilians, who exercise their right to peaceful assembly or while carrying out their humanitarian duty is a serious violation of the rules of international law, international humanitarian law, the ICC Rome Statute and Fourth Geneva Convention.  Thus, PCHR calls upon the ICC Prosecutor to open an official investigation in these crimes and to prosecute and hold accountable all those applying or involved in issuing orders within the Israeli Forces at the security and political echelons.