You Are Here: Home → Goliath lives: Palestinian children at risk in school 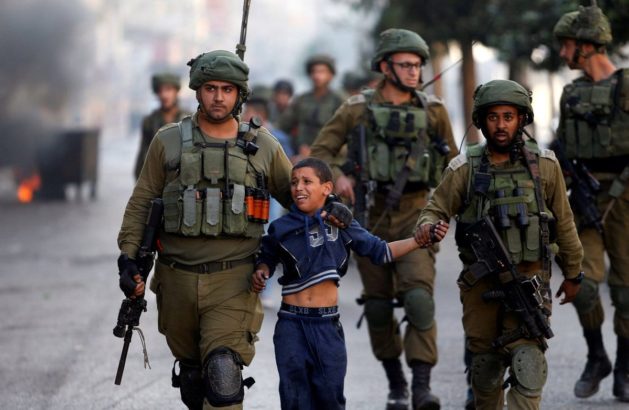 In the course of just 4 days, Israeli soldiers managed to attack and traumatize scores of school children, as well as adults who were there to serve the children. Mainstream media does not report on these incidents because they don’t match the narrative of benign occupation and Palestinians as terrorists.

If enough people know about such incidents – which happen on a regular basis – Israel and its supporters will no longer be able to hide behind the excuse of ignorance.

Soldiers Abduct a Child Near Hebron (11/9/18) Israeli soldiers chased and abducted an eight-year-old child in a town north of Hebron. The soldiers claimed the boy had thrown stones at the armored military jeeps.

Soldiers Attack Students during School Celebration (11/9/18) Israeli soldiers invaded a village near Bethlehem, and started firing live rounds at students, teachers and officials of the Ministry of Education, during a school celebration.

Israel Orders Halt to Kindergarten Renovation in Hebron (11/11/18) Israeli authorities imposed a ban on renovations of a kindergarten in the southern Occupied West Bank city of Hebron, according to Hebron’s Rehabilitation Committee. No justification was provided by Israel.

Army Attacks A Park Near A School In Bethlehem (11/11/18) A large military force invaded a village; soldiers tried to invade the park, but the locals stopped them, before the army started firing gas bombs and concussion grenades.

The attack was the second on the same day, as the soldiers invaded the park, on Saturday at noon, and tried to confiscate slides and swings, but the presence of an international delegation prompted them to withdraw.

Israeli Soldiers Attack School In Hebron, Injure Students (11/11/18) Israeli soldiers attacked, Sunday, a Palestinian school in Hebron, in the southern part of the occupied West Bank, causing many students, and one teacher, to suffer the effects of teargas inhalation.

Israeli Army Detains Dozens of American Activists Planting Flowers in the West Bank (11-12-18) The army detained some 45 left-wing Americans in the West Bank on Saturday. It also photographed their passports and confiscated some of their equipment. The group’s leader says they were planting flowers in a Palestinian village. The IDF says they were rioting and engaged in illegal construction.

The activists, from American Friends of Combatants for Peace, came to the village of Jubbet al-Dib, south of Bethlehem, Saturday morning to repair a playground. Upon leaving the village they were detained for about two hours.