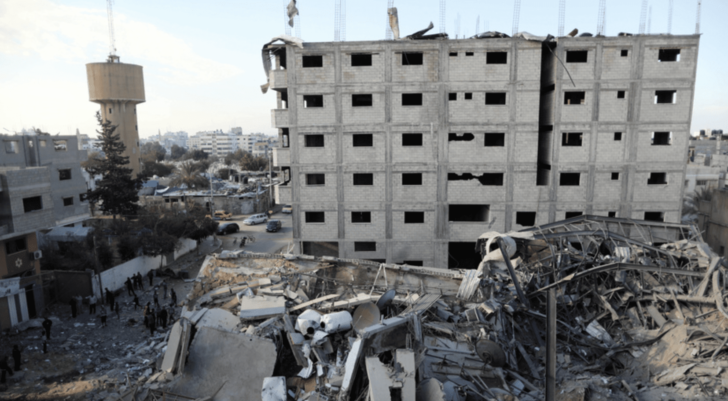 A view of the remains of Hamas’ TV station building that was destroyed by Israeli airstrikes, in Gaza City, Nov. 13, 2018.

Gazan and Israeli leadership have been busy lately; the news cycle has been changing fast. Because we can’t trust mainstream media to give us an accurate report, IAK  offers this rundown of the actual sequence of events, with comments from several leaders and analysts:

Dire humanitarian conditions in the Gaza Strip are showing signs of easing, as Israel and Hamas lower tensions and look for a long-term deal to calm violence.

Israel has taken the unusual step of allowing funds from Qatar to be used to pay Hamas’s government employees in Gaza and to provide $100 handouts to 50,000 families. In addition, Qatar has supplied enough fuel to Gaza to provide the residents with 16 hours a day of electricity, a first in five years. Israel has also granted Gaza fisherman expanded access to Mediterranean waters.

The weekly Friday demonstration by Gazans at the border with Israel also saw relative restraint – for the second week in a row.

Israel and Qatar have reached agreement on the establishment of a seaport in Cyprus that will serve the Gaza Strip…A Cypriot government spokesman confirmed that Israel had asked his country to examine the possibility of establishing a waterway on the island for shipping goods to the Gaza Strip.

Believe me, we were a step away from exerting maximal force and I think Hamas understood this…first, we aim for calm, then an agreement…[I am] doing everything I can to prevent an unnecessary war.

A carload of Israeli soldiers (some disguised as women) infiltrated Gaza and were discovered. They opened fire, killing a top Hamas leader.  Israeli forces managed to escape under cover of massive airstrikes. A total of 7 Palestinians and 1 Israeli were killed.

One former commander of the IDF Southern Command believes that this was likely an intelligence-gathering mission gone awry, rather than an assassination. “Activities that most civilians aren’t aware of happen all the time, every night and in every region. This action — an operation that was apparently exposed — wasn’t an assassination attempt. We have other ways of assassinating people and we know how to do it much more elegantly.”

This incident, according to some analysts, undid all of the progress that had been made toward peace, bringing the two sides to the brink of war.

Hamas responds to the incursion with a large number of rockets (460), including a direct hit of a military bus (no passengers); 1 Israeli (who happens to be Palestinian) is killed. Gazan activist Muhammad Shehada, speaking to Democracy Now, said Hamas was sending the message, “It is unacceptable for IDF to infiltrate Gaza.”

Shehada’s take: Israel’s response was “an explicit implementation of the Oxford definition of ‘terrorism,’ basically intimidating and terrorizing Gaza’s civilian caged population as an instrument to achieve political gains — essentially, to send strong messages to Hamas…[The people of Gaza] would be, presumably, terrorized back into passivity.”

He explained the situation for Gazans, faced with losing their homes or losing their lives: “Today, for instance, people were awakened at 4:30 in the morning, in the very early morning, to an Israeli phone call saying, ‘You have only one minute to leave your homes, or else you will die inside them.'”

We condemn in the strongest terms the rocket, missile and mortar attacks that are taking place from Gaza into Israel. We call for the sustained halt of those attacks. We stand with Israel as Israel defends itself against these attacks. It is simply unacceptable to target civilians.

The UN Security Council met, but was unable to come to an agreement about how to proceed.

Afterwards, Israeli ambassador to the UN Danny Danon told reporters, “There is Hamas that attacks and fires over 460 rockets at civilians and there is Israel that protects its people.”

He added that those SC members who blame Israel for the flare-up are “morally bankrupt,” and those who call for restraint on both sides don’t understand that “there is no such thing as both sides.”

Asked about the undercover Israeli military operation that sparked the recent hostility, Danon said: “We take action to protect our people and we will continue to do that.”

Against all odds, an unofficial ceasefire went into effect.

Palestinian armed factions made a joint announcement that they would respect the Egyptian-brokered deal “as long as the Zionist enemy does the same.”

Ha’aretz reports that the ceasefire agreement contained vague language, and “instructed the Israel Defense Forces ‘to continue operations as necessary.'”

Defense Minister Avigdor Lieberman joined many Israelis in calling for a strong military response to Hamas. He resigned from office, claiming that it was because he disagreed so strongly with the ceasefire. (Lieberman would have been the one who ordered and oversaw the botched IDF incursion into Gaza on Sunday; this was not mentioned as a reason for his resignation.)

The Palestinian News and Info Agency reported on a European human rights group’s suspicion that Israel may have targeted a media facility out of fear that its violations may be documented. The organization stressed that international humanitarian law dictates protection of media and journalists.

Thursday saw protests against the ceasefire in Tel Aviv, attended by residents of Israeli communities closest to the Gaza border, who have been experiencing the brunt of the rockets. One protest leader explained the need for both diplomacy and deterrence, and expressed that the residents have no faith in the government. “We feel like we’re not getting solutions…We want a future both for Gaza and for the South.”

She added, “It’s a shame how the government has not responded to over six months of violence.”

The struggle to make sense of it all

Israel’s word is worth nothing when it comes to agreements, whether they be peace treaties or ceasefires.  It adheres to no principles except naked self-interest defined in the crudest of terms.  If it has the opportunity to murder a leading military commander it will do so regardless of the resulting consequences; regardless of efforts being pursued by allies like Egypt to advance an Israeli-Hamas ceasefire.

Gazan activist Muhammad Shehada returned to the source of the current strife: the Gazan people’s decision

to rise against their slow death and take initiative with their own hands. People have been marching to the Gaza borders for more than six months…to demand that the blockade shall be removed.

If Gazans do not throw rockets or improvised projectiles, nobody at all listens to them whatsoever. Once these projectiles begin to fly over Israel, immediately the international community is concerned with restoring tranquility…the very suffocating status quo…What Gaza needs in order to assuage existing problems, including security problems, is the very minimum of human dignity. They need to live as other people around the world, clear and simple.

Time will tell whether Shehada’s hopes will be realized.

Facts and latest news on Gaza Great March of Return