You Are Here: Home → Freedom of Speech takes a hit in Boston as billboard comes down 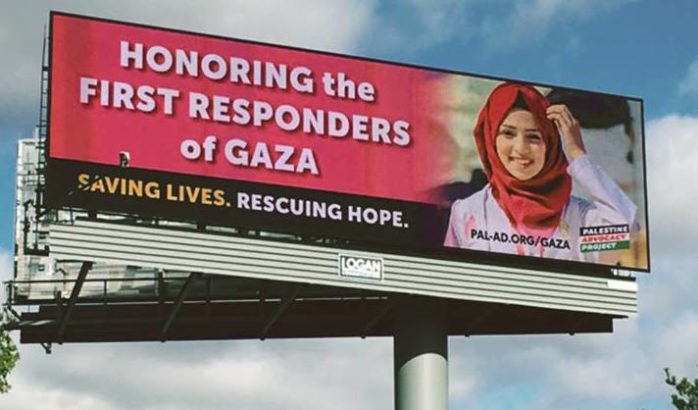 Billboard of Razan al-Najjar, a Palestinian volunteer paramedic who was killed in Gaza by Israeli forces while treating patients during a demonstration, Route 93, Boston. (Photo: Palestine Advocacy Project)

In an aggressive campaign against a billboard company and its staff, Israel supporters threatened boycott and used the label “anti-Semitism” as a weapon to shut down a positive ad celebrating first responders in Gaza. The ad did not mention Israel. No dialogue, no explanation, just suppression of free speech.

from the Palestine Advocacy Project, Mondoweiss

Update: Palestine Advocacy Project today issued the following statement about the removal of its billboard celebrating Palestinian first responders, which had another week to run outside Boston.

Nearly 3 weeks into its planned 4-week run, an electronic billboard honoring first responders in the Gaza Strip was pulled November 13th because the billboard company received phone calls and email complaints calling their staff terrorists and anti-Semites, and threatening a boycott.

The Palestine Advocacy Project sponsored the billboard on Interstate 93 near Boston to highlight the desperate situation in the Gaza strip, and to emphasize the humanity and agency of the people of Gaza, who are often portrayed as terrorists or victims. The billboard included a photo of deceased Palestinian medic Razan al-Najjar and text reading: “Honoring the First Responders of Gaza. Saving Lives. Rescuing Hope.” It was estimated to be viewed by over a half million motorists each week of its planned 4-week run, beginning 24 October. The billboard was met with positive media coverage.

This week, a coordinated, aggressive campaign was launched against the billboard company with accusations of anti-Semitism, intended to damage the company for hosting this billboard. Sarah Gold, a volunteer with the Palestine Advocacy Project, said, “This campaign is neither engaging us nor our perspective. Instead it is attempting through intimidation to eradicate the avenues of free speech we have endeavored to use; to silence us.”

The billboard is another casualty in an ongoing attack on free speech.  Palestine Legal states in their 2017 report “The Israeli state and its proxy organizations in the U.S. are investing heavily in punitive measures to intimidate and chill the free speech of those who wish to express criticism of Israeli policies.” The report documents 308 attacks on U.S.-based Palestine-related free speech in 2017 alone.

Razan al-Najjar and other Gazan first responders were doing their best to attend to wounded civilians; yet celebrating them is construed as an act of “hate & anti-semitism.”  One complaint reads in part: “A billboard glorifying those who try to kill and destroy our People and Homeland! Anti Semitism is as old as time itself, Hate of Israel is hate of Jews, completely unacceptable!” This negative campaign appears to be based on the erroneous notions that all Gazans are anti-Semites intent on murdering Jews, that Gazans are not entitled to basic human rights, and that any display of solidarity with them equates to a call for the destruction of Israel.

Richard Colbath-Hess, founder of the Palestine Advocacy Project, remarked that “The billboard was extremely positive and does not even mention Israel.  Instead it was a celebration of Palestinian heroes. Apparently, there cannot be Palestinian heroes without some advocates of Israel feeling attacked.”

This is the original post we ran on the billboard yesterday:

This morning the billboard outside Boston celebrating Palestinian medic Razan al-Najjar was taken down after three weeks over the highway, Richard Colbath-Hass reports. “We just found out today the billboard was taken down under pressure. The Palestine Advocacy Project is working on a response.” What follows is the group’s article about the billboard –Editor.

What possible aims can be achieved through presenting montages of people participating in a movement thousands of miles away from the United States? Why is it important that we acknowledge the crisis unfolding in the Gaza Strip? These are questions that the Palestinian Advocacy Project seeks to answer through its ongoing billboard campaign.

Palestine Advocacy Project has launched a billboard ad campaign to honor the heroism and self-sacrifice of the Palestinian medics who put their lives on the line to rescue and treat injured protesters in Gaza’s ongoing “Great March of Return” demonstrations. Razan al-Najjar, 21, was one of almost 120 medics thus far shot by Israeli snipers while attempting to care for wounded demonstrators. She was killed last June 1 wearing her white nurse’s coat and raising her hands to show that she was unarmed.

Palestine Advocacy Project’s billboard displays her photograph with the text, “Honoring the First Responders of Gaza” and “Saving Lives: Rescuing Hope.” As Padmini Baruah, a volunteer at the Palestine Advocacy Project says, “Americans tend to see Palestinians in stereotypes of either victim or terrorist. We want people to understand the full depth of Palestinian life and culture. They are struggling human beings who are capable of great acts of courage.”

The ongoing Great March of Return campaign began on March 30, 2018. Its aim is to end the ongoing siege and blockade of Gaza and resulting inhumane conditions under which its residents are forced to live, and to restore Gazans’ right to return to the homes they or their forebears were forced to flee in 1948. Although the vast majority of protesters are unarmed, the Israeli Defense Forces continues to fire indiscriminately on peaceable civilians in the besieged coastal enclave. As of October 1, 2018, Israeli forces have killed at least 190 Palestinians and wounded more than 21,000, according to health officials in Gaza. The victims include children, the elderly, and the disabled, as well as journalists and medics like Razan.

The aim of this campaign is to raise awareness about an issue that has seen much traction over the past few decades, but which is understood by few. Richard Colbath-Hess, founder of the Palestine Advocacy Project, explains that “the purpose of the billboard is to raise awareness about the courage and fortitude of Razan and other aid workers who risk their lives to support Gazans suffering under the disastrous effects of the U.S.-backed blockade.” Colbath-Hess notes that the United States government has enabled Israel’s blockade and military assaults by providing over $3.8 billion annually in military aid.

Over the last few years, knowledge of the challenges faced by the people living in the Gaza Strip has faded from public memory in the USA. Through these billboards, it is hoped that there will be a revival of the discourse around the rights of Palestinian people which continue to be under assault. The focus is to bring to light stories of resistance and survival that have emerged from among the people of Palestine as they have navigated the complex challenges of military occupation over time. In opposition to narratives that take away agency from the occupied people, the billboard campaign offers glimpses into independent actions of bravery stemming from within the movement.

Gazans live in some of the worst humanitarian conditions in the world, with the majority of the region’s children suffering malnutrition and nearly half of all adults without reliable access to food. Gaza’s residents survive on a 97% contaminated water supply and receive only four hours of electricity per day. The United Nations has warned that the area could become “uninhabitable” by 2020 as a result of Israel’s blockade and the destruction of civilian infrastructure. Gaza is often referred to as the world’s largest open-air prison.

Much remains to be done in order to ensure that the crisis at Gaza does not escalate further, and conditions stabilise. Through the billboard campaign, the attempt has been to ensure that instances of struggle and survival from the region are not forgotten. The words and actions of heroes like Najjar can go a long way towards providing inspiration, and can be a sober reminder of how much more work needs to be done before such sacrifices stop becoming necessary.

Palestine Advocacy Project is an all-volunteer organization that creates public media and education campaigns that expose Americans to the Palestinian struggle and advocate for an end to Israeli human rights abuses.

Which will it be: Unequivocal support for Israel or our First Amendment rights?