You Are Here: Home → In Israel, 53 mosques and churches vandalized since 2009, only 9 indictments filed 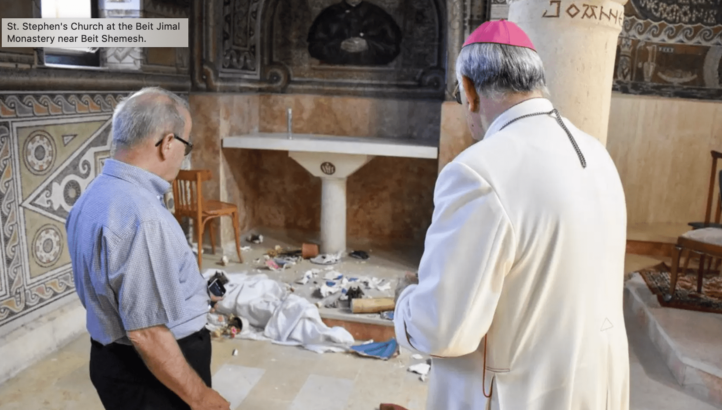 The number of mosques and churches attacked in Israel is high, but police effort at investigating these crimes are absurdly low. The head of monitoring group asserts, ‘Without a doubt, they aren’t looking hard enough’

by Yotam Berger and Nir Hassom, reposted from Ha’aretz (September 24, 2017)

Over 50 Christian and Muslim sites have been vandalized in Israel and the West Bank since 2009, but only nine indictments have been filed and only seven convictions handed down, according to Public Security Ministry data. Moreover, only eight of the 53 cases are still under investigation, with the other 45 all closed.

The ministry data only goes through July 2017, but the vandalism hasn’t ended.

The latest attack occurred last Wednesday, at St. Stephen’s Church in the Beit Jamal Monastery, near Beit Shemesh. Many items were broken, including some of the stained glass windows and a status of the Virgin Mary. Police are investigating, but so far no suspects have been arrested and the motive is said to be unknown.

This was the third such attack on the monastery in the last five years. In 2013, a firebomb was thrown at a door and hateful slogans were scrawled on the walls. And about 18 months ago, gravestones were vandalized in the cemetery. No suspects were arrested in those cases, either.

The wave of vandalism peaked in 2013, the data show. That year, 11 investigations were opened and five people were convicted. Also that year, the police opened a special hate crimes unit in their Judea and Samaria District. But judging by the data, the unit’s deterrent effect has been minimal.

Nine Christian and Muslim sites were vandalized in 2014 and the same number in 2015. In 2016, only three such attacks were recorded, but there were four in the first half of this year. From 2009 through 2012, there were 17 such incidents – but there wasn’t a single indictment.

The Tag Meir organization, which monitors hate crimes, keeps its own records. It says there were 44 attacks on Christian and Muslim sites between the end of 2009 and the beginning of 2016.

Tag Meir said many arson attacks on mosques have never been solved. These include mosque attacks in the West Bank villages of Kafr Yasif, Luban al-Sharqiya, Beit Fajjar, Hawara and Qusra, as well as one in the Israeli Bedouin town of Tuba-Zangaria and some in Jerusalem.

The ministry’s data doesn’t specify the location of the vandalized site, the severity of the damage or whether an indictment was filed in any given case.

Asked who the seven convicted people are and which cases it considers solved, Judea and Samaria District Police referred questions to the Justice Ministry.

The Justice Ministry said it didn’t have this information and couldn’t extract it from its computer system. It said the data would have to be compiled manually and suggested that Haaretz file a freedom of information request for it.

Tag Meir said it knows of only two cases that were solved: an arson attack on a Christian seminary near the Abbey of the Dormition, Jerusalem; and an arson attack on the Church of the Multiplication of the Loaves and Fishes in Tabgha, on the Lake Kinneret shoreline. The Israel Religious Action Center, which also tracks hate crimes, said it was also unaware of any other cases being solved.

Tag Meir Chairman Gadi Gvaryahu said he believes the many unsolved crimes are a question of police priorities. “Without a doubt, they aren’t looking hard enough,” he said, adding that some crimes remain unsolved despite security camera footage that included images of the suspected vandals’ cars.

“We know that after the Church of the Loaves and Fishes, someone – apparently the prime minister – decided they had to find them. So they found them,” Gvaryahu added.

The ministry data were divulged in response to a parliamentary question filed by MK Itzik Shmuli (Zionist Union) at Tag Meir’s request. Shmuli also said that when “about 85 percent of the cases in such serious crimes are closed with nothing,” this should “sound an alarm about the order of priorities.”

The data Shmuli received was accompanied by a letter from Public Security Minister Gilad Erdan that included an odd statement. Though all these cases involve suspected arson, Erdan said the investigations had concluded that “they were perpetrated from various motives, ranging from negligence through mental illness and, in extreme cases, incidents of arson that appear deliberate.”

This seems to contradict the fact that most of the cases were closed on the grounds of “perpetrator unknown.”

Gvaryahu said this also contradicts the fact that most of the arson attacks were accompanied by hateful graffiti. Erdan’s letter, he said, is “disconnected from reality.”