You Are Here: Home → Israel-Gaza deaths: 293 Gazans & 6 Israelis killed in past year 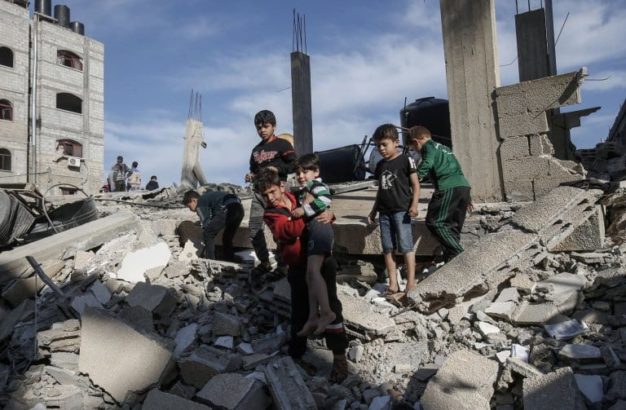 Palestinian children stand atop the remains of a building in Gaza destroyed by an Israeli airstrike.

With the recent surge in violence between Israel and Gaza, it is important to examine events of the past year and to learn the chronology and details of the recent deaths among both populations…

With news reports focusing on recent deaths in Israel and Gaza, it’s valuable to enlarge the time period being examined.

Israeli soldiers have been shooting Gazan men, women, and children every week for over the past year.

Israeli forces have killed approximately 290 Gazans and have injured over 29,000 since Gazans began their weekly Great March of Return on March 30, 2018 (see below about why they’re marching, including Israel’s suffocating 12-year siege on Gaza.)  A few additional Gazans died during this time period from wounds inflicted by Israeli forces earlier.

Among those killed and maimed have been numerous medics, women, children, and journalists. Approximately 126 Gazans have had legs and/or arms amputated, and others have been permanently paralyzed.

While Israeli governmental statements, often parroted by U.S. media, claim that Israel targets “terror,” the large majority of Gazans killed by Israeli forces have been civilians.

During the same time period, Gazan resistance fighters have killed 6 Israelis, one of them a Palestinian. (It is difficult to provide a number for Israelis wounded during this time since Israeli statistics for injured include those suffering from panic attacks.)

The names and details of both the Palestinians and the Israelis killed are listed on this timeline.

Deaths during the last 3 days:

On Friday, May 3, Israeli forces killed 4 Palestinians and injured 82. Among the injured were 34 children, two journalists and three paramedics.

On Saturday, May 4, Israeli forces killed 4 Palestinians (including an infant and her mother). Israeli forces also targeted and destroyed a news agency. Journalistic organizations around the world have condemned this attack. This attack was largely unreported by U.S. news media.

The Palestinian Israeli who died, Ziad Alhamamd, was a bedouin from the unrecognized Negev village of as-Sawaween who was working in an Israeli factory in Ashakalon when it was hit by a rocket from Gaza. Gaza’s rockets are mostly home-made and lack guidance systems.

Unrecognized villages are Palestinian villages that were in Palestine before Israel was created that are not formally recognized by the state of Israel. They have no access to Israeli services such as water, electricity, telephones, sewage systems, roads, and often schools and voting stations. Many of the villages are under Israeli demolition orders and never know when their homes will be destroyed.  Alhamamd’s village of Sawaween had been denied a school for its 350 elementary school-aged children.

U.S. news media have published a number of reports on the recent violence that emphasize the Israeli deaths, begin with Israeli victims, largely ignore the year-long killing of Gazans, and frame Israeli actions as defensive.

The New York Times lead paragraph that framed its report yesterday is an example:

“Fighting between Israel and Gaza escalated rapidly on Sunday in the worst combat since the last full-blown war in 2014, with Palestinian rocket and missile attacks killing four Israeli civilians and Israeli forces taking aim at individual Gaza militants.”

“The death toll continues to rise Sunday on both sides of the Israel-Gaza border in one of the most intense flare-ups of violence in the region in years, shattering a month-long lull in attacks.

“Palestinian militants in the Gaza Strip fired more than 600 rockets into southern Israel in less than 24 hours, killing at least four Israelis and leaving several more in critical condition.”

Below is how the Washington Post introduced its report today:

“An uneasy cease-fire settled over the cities of southern Israel on Monday after a weekend that brought a rain of 600 rockets from the Gaza Strip, but not all residents thought the truce was a good thing.

“Near the explosion-scarred house of Moshe Agadi, 58, who became the first Israeli since 2014 to die in rocket fire from Gaza, mothers took their children to play in a park after 48 hours of sheltering indoors.”

Meanwhile, the Israeli military has abducted 11 Palestinians in the West Bank, uprooted 120 Palestinian olive trees,  and an Israeli NGO published a report revealing that Israeli authorities forced almost 3,000 Palestinians from their homes in East Jerusalem between 2004 and 2019, deliberately leaving them homeless, including 1,574 of minors.

Total number of Israeli and Palestinian deaths including those outside Gaza

Alison Weir is executive director of If Americans Knew, president of the Council for the National Interest, and author of Against Our Better Judgment: The Hidden History of How the U.S. Was Used to Create Israel. (This article has been updated with the latest statistics and information.)

[Scroll down for U.S. politicians’ statements on Gaza]

Please note: Israel’s bombardment of Gaza and its destruction of property, schools, news agencies, etc. is illegal under international law.

The destruction of civilian property is illegal under Article 147 of the Fourth Geneva Convention of 1949. Article 25 of the Hague Regulations of 1907 on Laws and Customs prohibits the attack or shelling of towns, villages, dwellings and unprotected buildings. Article 53 of the Fourth Geneva Convention of 1949 requires the Occupying Power not to destroy any private property unless there is an urgent need to prevent hostilities. Israel’s air strikes against civilian neighborhoods constitute a war crime under article 8.2, b.2 of the Rome Statute of the International Criminal Court.

Once again, ‘NYT’ distorts the news, dishonestly making Gazans the aggressor and Israel the victim

Views of presidential candidates & Congressional reps on the Israeli assault