You Are Here: Home → Gaza fact sheet about why Palestinians are marching 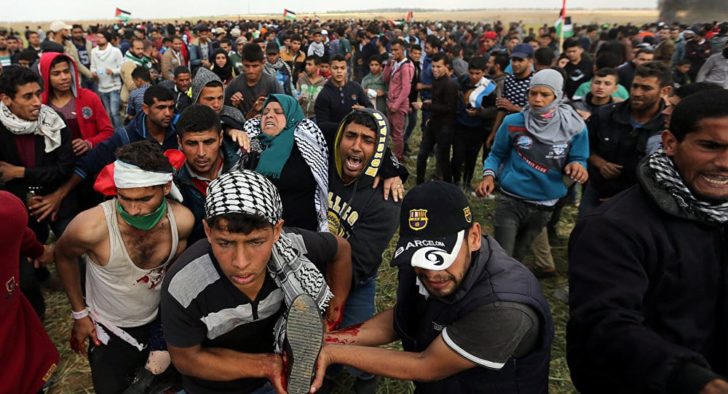 [Scroll down for flyer]

Below are two fact sheets about Gaza. (People may wish to print these out and distribute them in their communities. A section has been left blank in the first one so that individuals can add the name of their group, an email address, additional information, or their own statement if they wish.)

Since U.S. media coverage of Gaza is sparse and/or flawed, we feel it is important to provide people with essential facts. Below is the text of the fact sheet with clickable citations, and below that is the flyer to download and print out.

Why are the Palestinians of Gaza Marching?

MOST OF THE PALESTINIANS LIVING IN GAZA ARE REFUGEES FROM 1948.

In that year, 75% of all Palestinians were ethnically cleansed from their homeland and forced into exile. The UN declared in 1948 that “refugees wishing to return to their homes and live at peace with their neighbors should be permitted to do so at the earliest practicable date” (UNGA Resolution 194).

NOW, 70 YEARS LATER, GAZANS ARE MARCHING FOR THIS RIGHT OF RETURN.

SINCE 2007, ISRAEL HAS KEPT GAZA UNDER BLOCKADE BY LAND, SEA, AND AIR. THIS HAS BROUGHT ABOUT:

WHY DID ISRAEL START “WARS” AGAINST AN UNARMED (11) POPULATION?

Israel’s stated purpose for launching 3 wars against Gaza was “to bring an end to rockets being shot into Israel.” (12)

Let’s talk about those rockets.

Since 2001, Gazans have shot off something like 13,000 rockets and about 5,000 mortars – that’s an average of 3 projectiles every single day. (13) That’s roughly 18,000 indiscriminate projectiles in 18 years, shot from Gaza into Israel. How many people in Israel do you think have been killed by rockets & mortars during the entire time? 44. In 18 years. (14) How many people in Gaza have been killed by Israeli forces during that same period? Approximately 6,000 men, women, and children.

PALESTINIANS HAVE WAITED SINCE 1948 FOR THE WORLD TO BRING JUSTICE. NOW THEY ARE READY TO MAKE IT HAPPEN.

The PDF has a field in which you can add additional text such as your organization’s website or other contact info. 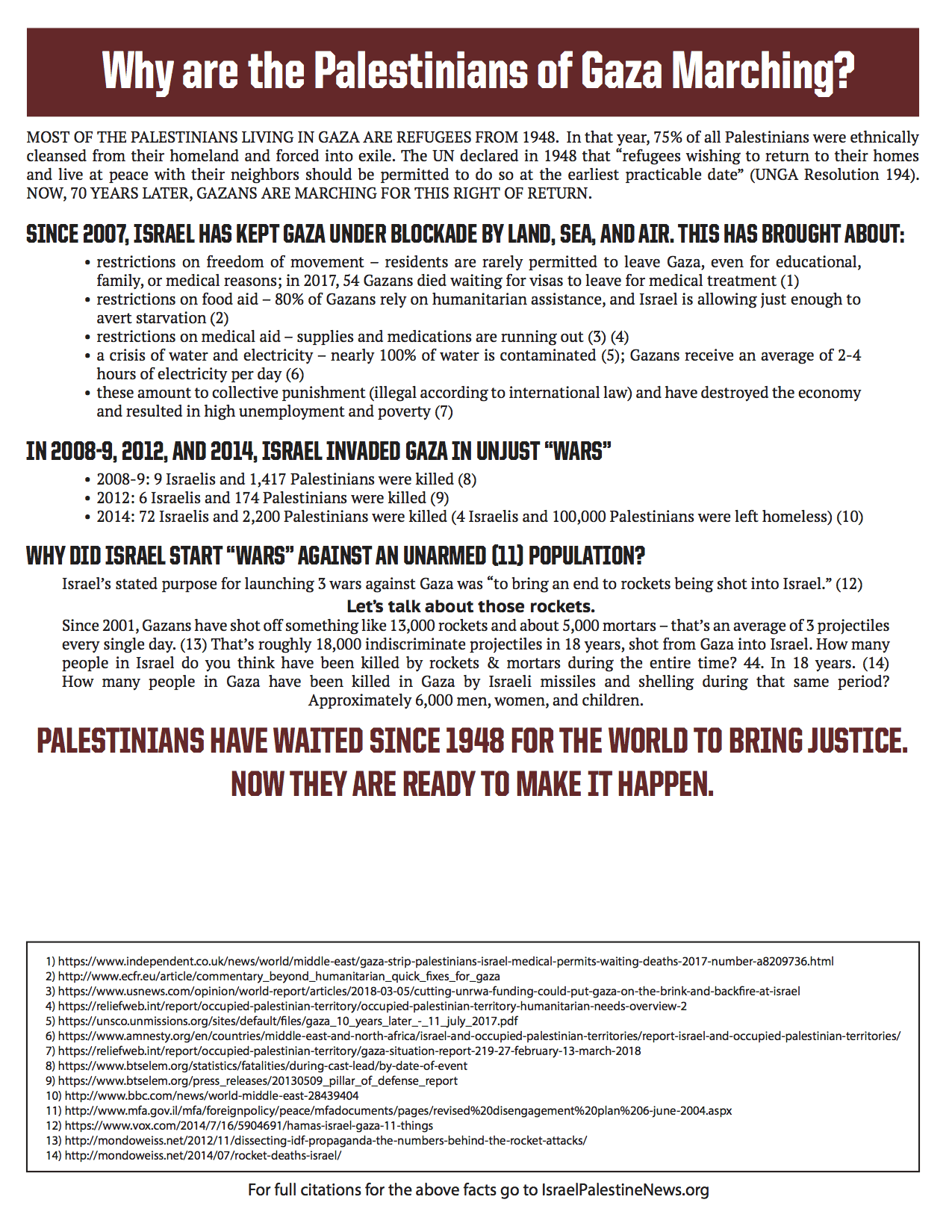 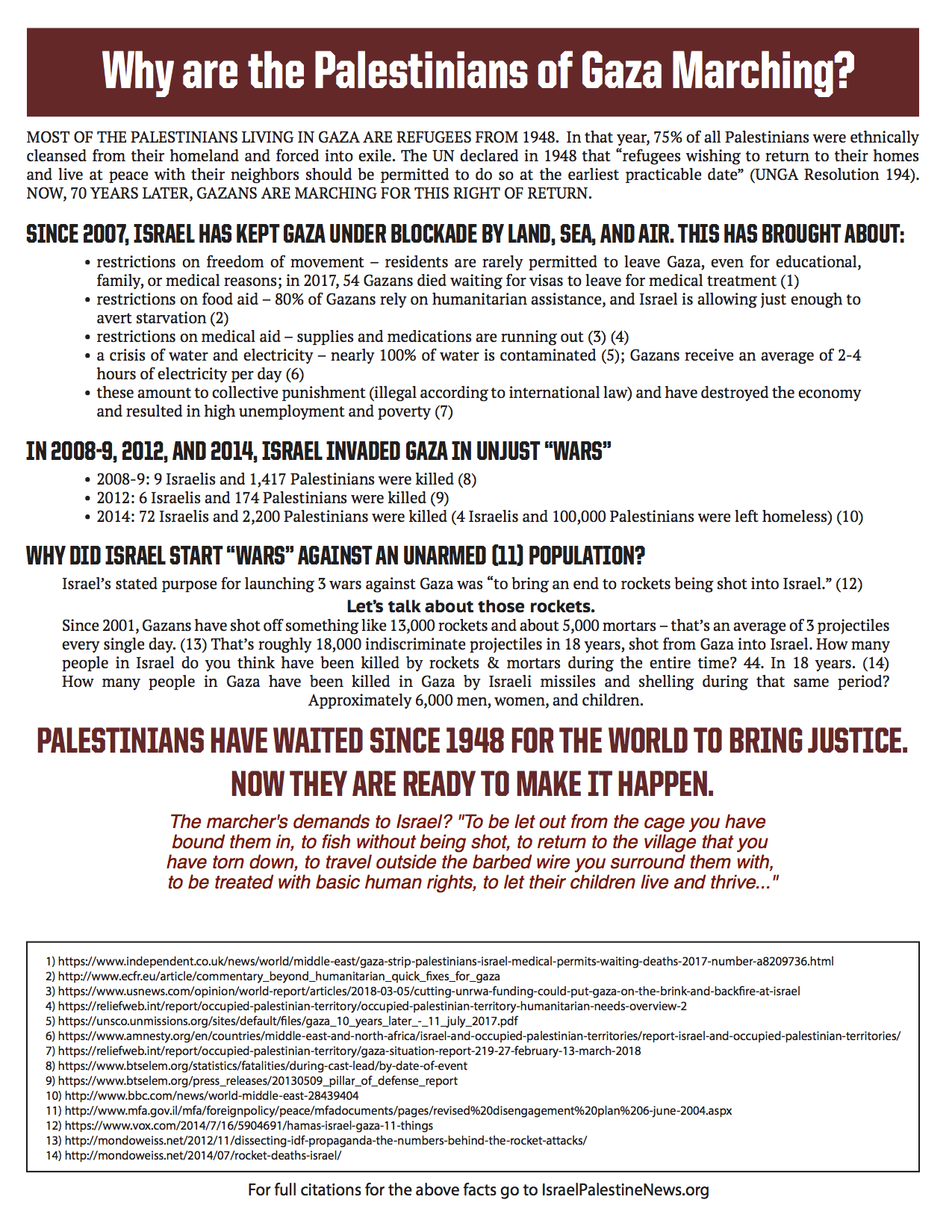