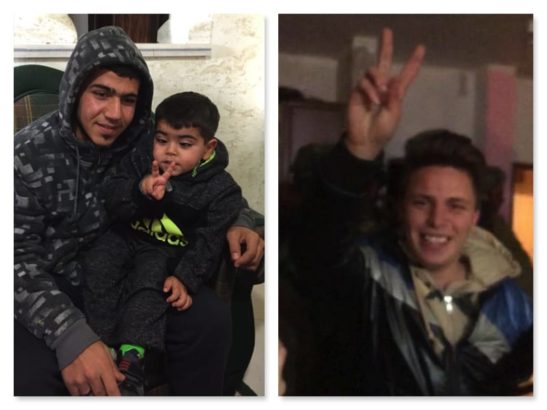 The Burnat family and the whole town of Bil’in have been targeted by Zionist forces for consistently and nonviolently resisting the Wall and the settlements. Activists from around the world join the weekly protests. Abdul-Khaliq was kidnapped in December and has been imprisoned ever since without charge, only months from his high school graduation.

The Tamimi family are global icons of courage – except in pro-Israel circles, where they are demonized – for their endurance as they are collectively punished for their decision to stand up to occupation forces. And like Bil’in, the entire town of Nabi Saleh has been targeted: on January 13, Israeli forces declared it a closed military zone.

The Ofir Military Court adjourns my son, Abdul-Khaliq’s, ‘hearing’ until 11 February. I attended the ‘hearing’ today, fifty days after my son’s abduction, and it was a long day of deliberate humiliations and insults.

My wife and I went through several gates and numerous humiliating body searches, and then we arrived at a yard where the detainees’ families wait to attend their children’s ‘hearings’. After two hours of waiting, we entered the ‘court’, and what a court it is!

A court filled with soldiers wearing military uniforms and a child in a cage, his feet in chains, wearing a brown uniform and a broad smile. A smile that says, I am strong! A smile to greet his mother and father in an atmosphere filled with animosity and hatred.

One of the soldiers told us to sit in an area reserved for families of the detainees and not to speak. Another soldier was ordered to recite the ‘charges’ against Abdul-Khaliq. He started to read, his eyes filled with mendacity and malevolence: Stone-throwing using a slingshot, nine times; causing severe damage to the Wall; Presenting a threat to a ‘security area’; Costing the State huge amounts in damages, along with numerous other charges.

Judge, prosecutor, and guards are all soldiers in uniform. I never felt that I was in a courthouse; rather, it was the scene of a great injustice, a part of the Zionist Occupation. After reading out the ‘charges’, the judge in military uniform spoke up to declare that the ‘hearing’ would be adjourned until Sunday, 11 February 2018.

We just came back from my son Mohammad trial that we were allowed to attend for the first time since he was arrested 17 days ago , the judge didn’t give a decision about whether if he will keep him and interrogation as the Shabak asked or he will give his order to the Shabak to end the interrogation and send him to the prison , the decision will be taken within the coming couple of days.

Mohammad looks very tired, his face turned to yellow and he lost around 7 kilos or more of his weight, he don’t have enough food or sleep during the past 17 days and he went through so many interrogation sessions days and nights , despite this he still very strong and they couldn’t break him.

And this update from Popular Struggle Coordination Committee’s Facebook page:

The Tamimi Brothers, Muhammad and Osama Are Still under Interrogation by Israeli Intelligence (Shabak) at Baitah-Tekva Prison and Interrogation center in Solitary confinement.

On Sunday, Jan, 28.2018 the Israeli military prosecution requested the military judge at Ofer Military court for an extension of the investigation period with Muhammad Tamimi (19). The military judge has not approved the prosecution’s request yet after an appeal by Muhammad’s lawyer that 18 days being interrogated are enough.

Muhammad was arrested on January 10, 2018, one week after the release of his mother, Manal Tamimi, who was arrested on 29 December 2017 during a non-violent demonstration in front of Ofer Military court calling for the release of the other Tamimi women: Ahed, Nariman, and Nour (was released on Jan,5, 2018). Today Muhammad enters his nineteenth day of solitary confinement accompanied with continuous interrogation, which was expressed in the investigator’s reply to the lawyer’s question of the number of investigation sessions as “I cannot even count them because they are a lot.” The charges against Muhammad are still unknown as they are in “a secret file” as the lawyer was told.

Osama Tamimi (22) the brother of Muhammed and the son of Manal, has been arrested ten days after the arrest of Muhammed, Osama is currently subjected to similar detention conditions as his brother Muhammad at Baitah Tekva Prison and interrogation center.

Osama was arrested while going to his home in Nabi Saleh in the middle of the day. As a part of Israel’s constant violation of the Palestinians’ rights, Israelis did not call Osama’s family to inform them about the arrest, until they knew from a different source one day after the arrest. The situation of Osama is similar to Muhammad’s. The two brothers’ interrogation is being held by investigators from the Israeli Intelligence (Shabak) encountering harsh interrogation conditions in one of the worst investigation centers. The forms of ill-treatment employed against the Tamimi brothers include interrogation sessions that tantamount to 12 consecutive hours, depriving of sleep and other sensory deprivation, isolation and solitary confinement, and threats against the lives of their families.

The detention of the Tamimi brothers is part of the collective punishment against the Tamimi family from Nabi Saleh. Which all started from the arrest of Ahed (17) and her mother Nariman (42) since 19 Dec, 2017. It also included an announcement that any permits by the Tamimi people to enter Israel will be revoked. The Israeli occupation’s measures are as a tool to stop the Tamimi family from protesting against the occupation, which became a symbol of non-violent resistance in the occupied West Bank.

The Military judge will issue a decision in the third court hearing for Muhammad next Wednesday 31, Jan, 2018 of either finishing the interrogation or approving the appeal of the prosecution to extend the investigation for other 8 days. A decision on Osama’s case will also be issued in his court hearing on 4 February 2018. The proceedings pursued by both the military prosecution and court to keep the Palestinian detainees in custody and under long interrogation periods show that the justice system in Israel is being used as discriminatory policy towards Palestinians to sustain the occupying control over Palestinians, instead of serving justice and law and to quash the Palestinian non-violent resistance.

The popular committees call upon the international community and international organizations to intervene in order to protect the basic rights of the Palestinian people. Meanwhile, Palestinian children, men, youth and women are all united in resisting the occupation, risking their lives in face to face encounters with the occupation army, demonstrating in Gaza city, Jerusalem, Haifa, Ramallah, Bethlehem, Yaffa, and Hebron. We stand united across the different cities. As long as the occupation continues, we will keep resisting for a life of freedom, justice and dignity.

Read other reports on the Tamimi family from If Americans Knew here.