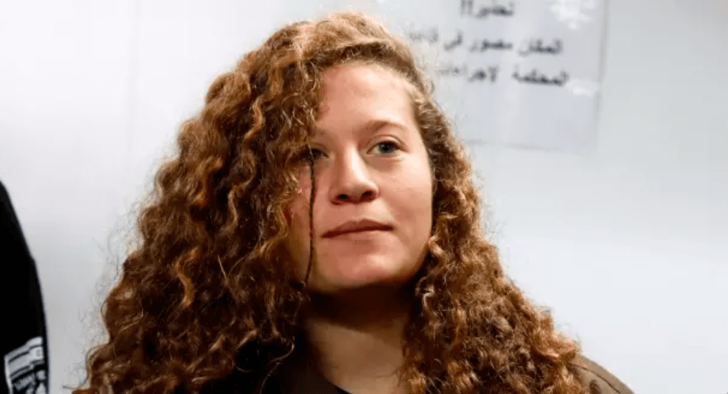 Posters and yard signs call for Israel to free 16-year-old Ahed Tamimi. Below are the facts about Ahed and other Palestinian prisoners, including a video about Ahed.

U.S. taxpayers give Israel $10 million per day, which gives Americans the need to become informed on this issue and to speak out when we disagree with how our money is being used.

At the end of the post you can order or download signs to display or carry in a demonstration or march.

The facts about Ahed:

Sixteen-year-old Ahed Tamimi and her mother have been in an Israeli prison since December 19th. A cousin, also charged, has been temporarily released on bail.

Their alleged crimes? Ahed and her cousin confronted Israeli occupation soldiers who had invaded their yard shortly after Israeli forces had shot another cousin, 15, in the face. The bullet lodged in the boy’s skull, and he underwent six hours of surgery in which part of his skull was removed. He was then placed in a medical coma for 7 hours. (He is slowly recovering; the prognosis for full recovery is not good.)

When two heavily armed Israeli soldiers invaded Ahed’s yard an hour later, the teenager and her 21-year-old-cousin Nour told the soldiers to leave. When the soldiers refused to leave the Tamimi property, Ahed, outraged at what they had done to her cousin, eventually slapped one. After Ahed’ mother came out and interceded, the incident ended.

When a video of the incident was posted, the Israeli public and some top officials were outraged at Ahed’s behavior (there was little concern that Israeli soldiers an hour earlier had shot a boy in the face).

As a result of this public outcry for vengeance, three days later the Israeli military – which had originally said there had been no need to arrest Ahed and the other –, raided the Tamimi home at 3 AM and took Ahed away in handcuffs. When Ahed’ mother, crying hysterically, attempted to hug Ahed, the soldiers threw her to the ground.

The following morning Israeli soldiers also abducted Nour from her bed. When Ahed’s mother went to the police station looking for her daughter, she was also imprisoned.

Ahed and her mother, who are being tried in an Israeli military court, face years in prison: 99.74 percent of Palestinian prisoners in these courts are convicted.

Amnesty international has launched a campaign calling for their release: “There is nothing Ahed Tamimi has done that can justify the continuing detention of a 16-year-old child. She is one of approximately 350 Palestinian children held in Israeli prisons and detention centres.”

Amnesty points out: “Israel is clearly, brazenly flouting its obligations under international law to protect children from overly harsh criminal punishment. It would be an unconscionable travesty of justice if Ahed Tamini’s act of defiance in the face of relentless oppression earns her a long prison sentence after a trial in a military court that does not ensure basic fair trial standards.”

Israel has also banned Ahed’s father, Bassem Tamimi – a former Amnesty International prisoner of conscience – from international travel. Ahed’s mother, Nariman, has a surgically placed metal plate in her leg from when an Israeli soldier shot her in the knee last year.

Amnesty reports: “The Israeli army prosecutes hundreds of Palestinian children in juvenile military courts every year, often after arresting them in night raids and systematically subjecting them to ill-treatment, including blindfolding, threats, harsh interrogations without the presence of their lawyers or families, solitary confinement and in some cases physical violence. There are currently some 350 Palestinian children in Israeli prisons and detention centres, according to local human rights organizations.

Israel has imprisoned approximately 40 percent of all Palestinian males at some point in their lives. They are physically abused in prison; some have been American citizens.

Israel is illegally occupying and confiscating Palestinian land, and the Tamimi family has been in the forefront of unarmed resistance against the theft of their land.

Ahed’s village of Nabi Saleh contains about 600 villagers, many of whom have participated in weekly demonstrations beginning in 2010 through 2016. During this time Israeli forces injured about 350 villagers, 50 left permanently disabled. Two from the Tamimi family were killed. In 2017 the villagers suspended these weekly protests, since Israeli forces continued to attack them, and the world paid no attention.

In all, Israeli soldiers have killed  23 members of the Tamimi family. A few days after Ahed was imprisoned, Israeli forces shot and killed another Ahed cousin with a bullet to the neck.

A few weeks later they imprisoned another Tamimi woman (Manal)  and her son  (Muhammad). Manal was held for a week and described her treatment in an interview:

“When [the Israeli soldier] took me back to Ofer prison, and we were away from the media and the cameras, they began, and she began to beat me, and I had bleeding in the jaw and all the time in the prison I was very sick, and I was under extreme pain, and then they took me to interrogation where they kept me the whole night until 12:30 at night, outside, in [the] cold.”

Muhammad Tamimi is still in prison. As of Jan. 30 the charges against Muhammad were still unknown – his lawyer was told they’re in “a secret file.” – and he had been kept in solitary confinement for 19 days.

Ten days after Muhammad was taken, Israeli soldiers imprisoned his brother Osama, who is also subject to ongoing harsh interrogation.

On Jan. 13th Israel closed off the entire village of Nabi Saleh, calling it a “closed military zone.”

What is this all about? 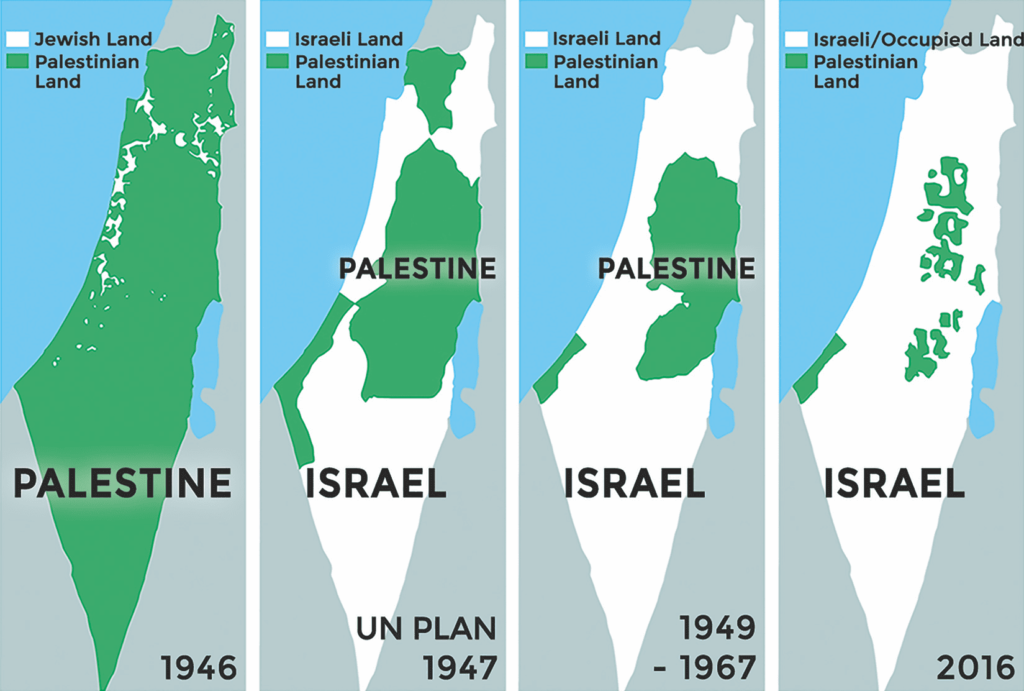 It is extremely important to understand the history and context of this story. Israel was created through warfare in 1947-1949, expelling much of the indigenous population (the large majority of whom were Muslim and Christian) in order to make a preferentially Jewish state.

In 1967 Israel continued its dispossession of Palestinians through another war, as a result of which it (illegally) acquired still more land, began a ruthless military occupation, and increased its confiscation of Palestinian land.

Today, Palestinians in Gaza and the West Bank are virtually imprisoned by Israel, which controls the borders and regularly prevents access to the outside world. Israel invades and even shells Palestinian areas regularly, abducts anyone whenever and however it wishes, and regularly mistreats Palestinian men, women, and children with impunity.

For throughly cited information on the history of this conflict and on the current situation, please go here. 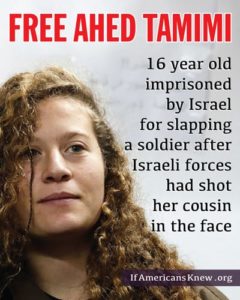 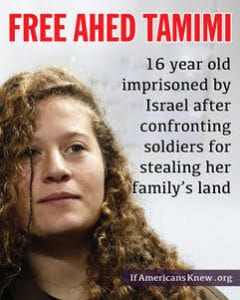 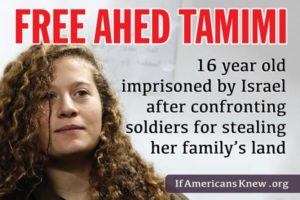