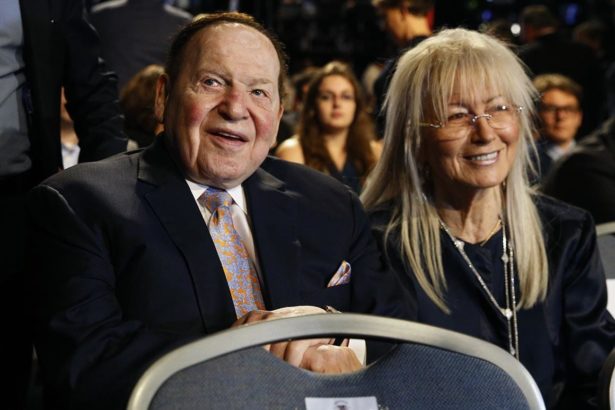 Evidence suggests that Miriam, an Israeli citizen, drives the Adelson’s actions to influence U.S policies on behalf of Israel… pushing for the relocation of the US embassy to Jerusalem, donating an unprecedented $113m to this year’s midterm election… Miriam is wealthier than husband Sheldon, Rupert Murdoch…

When Dr Miriam Adelson was awarded the US Presidential Medal of Freedom, the nation’s top civilian honor, by Donald Trump in November, the public response ranged from disdainful to “who?” Her husband, the casino billionaire Sheldon Adelson, is widely known for his record donations to Republican causes, as well as passionate support for conservative Israeli interests. Many news articles about the award described Miriam solely as his wife.

But Miriam’s influence has been deeper than many credit, although she appears to have been perfectly comfortable remaining in her 85-year-old husband’s shadow until recently.

The 73-year-old has played a pivotal role in forming the couple’s interests and alliances in the US, where she is a naturalized citizen, and in her native Israel, according to public records and interviews with people who know her socially and professionally. Evidence suggests that she is the driver in the couple’s political and philanthropic activities, whether pushing for the relocation of the US embassy to Jerusalem from Tel Aviv or donating an unprecedented $113m to this year’s midterm elections.

“Everybody says it’s Sheldon, but it’s Miriam,” says Michael Cherry, the associate chief justice of the Nevada supreme court, who sits on the board of the Las Vegas methadone clinic that the Adelsons founded.

“Sometimes I chuckle and sometimes I just shrug,” says Ron Reese, the senior vice-president of communications for the Las Vegas Sands Corp, the casino company that Sheldon created.

Case in point: a photo of Sheldon that accompanied some stories about their midterms donations cropped Miriam out, leaving only bits of her spiky blonde hair and one lens of her rimless glasses. Paul Krugman, the New York Times columnist, tweeted, “Some thoughts on giving Miriam Adelson, who has done nothing for her country besides being the wife of a Trump-friendly megadonor, the Presidential Medal of Freedom. Of course it’s ludicrous, and an insult to people who received the medal for genuine service.”

Some thoughts on giving Miriam Adelson, who has done nothing for her country besides being the wife of a Trump-friendly megadonor, the Presidential Medal of Freedom. Of course it's ludicrous, and an insult to people who received the medal for genuine service. But … 1/

The Adelsons declined to be interviewed for this story, but Miriam told a Fortune writer in 2012 that “Sheldon is everything to me. He is my best friend, as I know I am to him, and he is a ‘mensch’. He claims that I’m an angel and I say he is the ‘wind beneath my wings’. In any case, we are on a magnificent flight together.”

One of the few outward hints of Miriam’s powerful role comes with the couple’s his-and-hers political contributions – made to the same candidates and causes, in identical amounts. When the couple gave $30m to the Congressional Leadership Fund, dedicated to electing Republicansto the US House of Representatives, last May, it was $15m from him and $15m from her.

Miriam turns out to be far wealthier than her husband, who was ranked #21 on the Forbes 2018 billionaire ranking. She appears nowhere on the Forbes list, but according to the corporate filings of the Las Vegas Sands Corp casino company, which accounts for the bulk of the couple’s wealth, she directly controls a 41.6% stake, compared to her husband’s 10%.

Worth $17.4bn at the current stock price, her holdings make Miriam wealthier than a number of the world’s richest men, including Rupert Murdoch and Charles Schwab.

Sheldon serves as Las Vegas Sands’ chairman. Miriam is director of community outreach. It isn’t an executive role, but her presence in the executive offices is commonplace. Nevada journalist Jon Ralston recalls Miriam walking unannounced into Sheldon’s sprawling office during an interview about online gambling. “Suddenly it was, ‘Sheldon, tell him that’s off the record’,” Ralston recalls. “He’s just so blunt and I think that worries Miriam.”