You Are Here: Home → Opinion: As an American-Israeli, I Am Thrilled for the Palestinians and for Rashida Tlaib

Opinion: As an American-Israeli, I Am Thrilled for the Palestinians and for Rashida Tlaib 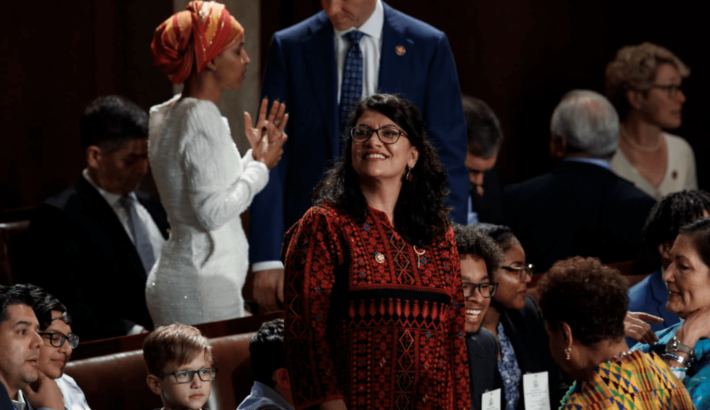 Rashida Tlaib of Michigan, looks to the gallery from the house floor before being sworn into the 116th Congress at the U.S. Capitol in Washington, January 3, 2019. Credit: Carolyn Kaster/AP

Every day that Netanyahu chooses Trump and fundamentalism over the pro-democracy, pro-equality, pro-pluralism views of diaspora Jews, is a great day for the Palestinian cause.

No Israeli prime minister, no Israeli government and no consortium of allies has done nearly as much – inadvertently, to be sure – to bring the cause and the grievances of the Palestinians front and center.

As an Israeli and as an American, I want to congratulate Michigan Democratic socialist Congresswoman Rashida Tlaib, the first Palestinian-American woman member of the House of Representatives.

I am thrilled for her, and for the Palestinian people, and for America.

I am particularly pleased for the large number of Palestinians in America who, over the years, have been told to their faces that “there’s no such thing as a Palestinian.”

I was delighted to see that in honor of her swearing-in last week, women and girls across America wore a traditional thobe, a hand-embroidered gown, often one made painstakingly by mothers for their daughters, which Tlaib herself wore to the ceremony at the Capitol.

“I have been in the USA for 52 years and today I felt that her win is for every Palestinian-American girl and woman,” said Alice Muaddi, who immigrated to the States from a Palestinian village, and who greeted Tlaib in her thobe after traveling from New Jersey to Washington.  “She is an inspiration and a role model to all of us,” said Muaddi, whose daughter Susan Muaddi Darraj, a professor and novelist, was credited with creating the #TweetYourThobe hashtag on social media.

In the face of social media criticism that wearing a thobe to the swearing-in would be un-American, the counter campaign on Facebook, Instagram and Twitter was a strong statement that Palestinians not only exist, but have a deeply rooted culture which goes well beyond traditional dress.

As an ethnic minority, Palestinians in America have long been subjected – to paraphrase former Soviet dissident and Israeli leader Natan Sharansky’s definition of anti-Semitism – to demonization, delegitimization and double standards.

Which is why I find it especially heartening, not only that Palestinians have a uniquely vocal and visible advocate in Congress, but also that the efforts of the Netanyahu government to “manage” the Palestinian cause into oblivion have been so spectacularly self-defeating.

No Israeli prime minister has ever tried harder or longer to quash any possibility of Palestinian statehood. No Israeli government has ever marshaled his arsenal of financial, political, diplomatic and media resources to discredit the Palestinian people and blunt non-violent campaigns to challenge occupation and highlight injustices against Palestinians.

No Israeli prime minister, no Israeli government and no consortium of allies has done nearly as much – inadvertently, to be sure – to bring the cause and the grievances of the Palestinians front and center.

In Israel, every single day, the government and the settlers for whom it stands, underscore and lend new credence to pro-Palestinian arguments.

As leftist Meretz Knesset Member Mossi Raz tweeted, in a sardonic reference to corresponding Israeli treatment of the families of Palestinian youths suspected of terrorism:

“I call on the Israeli government not to demolish the [family] homes of the Jewish terrorists accused of murder, not to deport their relatives, and not clamp a military closure on their settlements.”

Or witness the construction of what Israel’s Channel 10 news called in a red banner headline Monday night “THE APARTHEID FREEWAY” – a new, high-speed highway linking Ramallah-area West Bank settlements to Jerusalem – but with a 26-foot-high concrete center-divider wall separating two complete and parallel roadways for settlers and Palestinians – with a checkpoint at the onramp.

Or witness a new Israeli government plan to build West Bank settlements in an internationally sensitive area – settlements which would surround the biblical town of Bethlehem.

Meantime in America, where Fox News Anchor Ed Henry last week dismissed Rashida Tlaib as a “leftist loon,” AIPAC and Fox did their best to support controversial legislation which would criminalize backing for the BDS movement to boycott, sanction and divest from Israel.

Israeli government officials and pro-Israel “explainers” have gone out of their way to condemn BDS as “violent” and as “terrorism” against an entire people.

I am one of many people, Palestinians and Israelis alike, who have serious issues with BDS in the way that it’s run.

Allow me to suggest, though, that when Netanyahu goes all the way to Congress to lobby for crippling sanctions against the entire Iranian people, when he regularly orders and institutes collective punishment against all the Palestinian residents of Gaza and of the West Bank, he is on shaky ground when at the same time, he insists that boycotts of Israel are violent anti-Semitism – while sanctions driven by Israel are legitimate and statesmanlike and necessary.

Every day that the Netanyahu government alienates Jews abroad, until recently the bedrock of international support for Israel, is a great day for the Palestinian cause.

Every day that the Netanyahu government coddles and courts white nationalist regimes and activists at the expense of supporting diaspora Jews legitimately fearful of mounting right-wing anti-Semitism, is a great day for the Palestinian cause.

Every day that the Netanyahu government chooses Donald Trump and fundamentalism over the pro-democracy, pro-equality and pro-pluralism views of the majority of diaspora Jews, is a great day for the Palestinian cause.

Every day that radical settlers burn the Israeli flag, or write “Death to Zionism,” or replace the Star of David with a swastika, is a great day for the Palestinian cause.

Maybe the fiery criticism directed at Rashida Tlaib has more to do with the critics than their target. Maybe it’s pointing to a world in which advocates of an independent Palestine and of Palestinian rights are demanding that their voices be heard and their basic human rights be respected.

Maybe it describes a world in which Israeli leaders routinely dismiss the words occupation and apartheid – and Palestine – as if they were as obscene and unacceptable as, say, Rashida Tlaib’s description of Donald Trump as “The Motherf*cker.”

Israeli leaders and “explainers” can deny the reality of occupation and apartheid all they like. But if Israel continues in its current trajectory, it won’t be the words “apartheid” or “occupation” which will become triggering obscenities connoting depths of injustice, inequality, and oppression, it will be the word Israel itself.