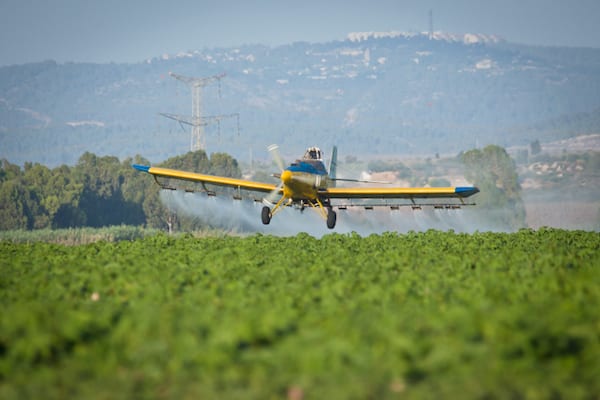 For 3 years, Israel has been spraying dangerous herbicides into Gaza to destroy foliage and enable clear viewing of land near the border. (Think Agent Orange.) The destruction of crops and the health risks to farmers infringe on human rights and violate international law. Human rights groups are trying to end this practice.

The Israeli army is continuing to spray dangerous herbicides on agricultural fields inside the Gaza Strip, three years since +972 Magazine first reported on the practice. This week, three Palestinian and Israeli human rights groups sent a letter to Israeli military officials demanding they immediately cease spraying the dangerous chemicals into Gaza.

The latest instance of spraying herbicides, using a reportedly carcinogenic chemical, took place in early December. A variety of crops inside Gaza were damaged as a result, according to the rights groups.

“The farmers have sustained massive losses in the past as a result of spraying, and been exposed to the health risks associated with the chemical agents used in the spraying,” Al Mezan, Gisha, and Adalah wrote in their letter to Israeli Defense Minister Benjamin Netanyahu, along with the country’s attorney general and military advocate general.

“The spraying is a highly destructive measure, infringing on fundamental human rights and violating both Israeli and international law,” the rights groups added in a joint statement Wednesday.

Israel has for years maintained a unilateral “no-go zone” inside the Gaza Strip, and regularly sends bulldozers and other equipment across the fence to level land and destroy plants and trees in order to maintain a clear line of sight. Since the start of 2015, the Israeli army crossed the fence upwards of 207 times in such operations, an average of more than twice a week.

In December 2015, the Israeli army admitted for the first time, in response to questions from +972 Magazine, that it was also using herbicides inside Gaza. According to follow-up reporting by Amira Hass in Haaretz, close to 3,500 acres (14,000 dunams) of farmland in Gaza have been damaged by the practice. The spraying has also damaged Israeli crops along the fence.

The letter from the three human rights groups further reveals that the chemical being sprayed by Israeli military contractors, Roundup, has been determined by the World Health Organization to be a carcinogen and is not meant for aerial spraying, both due to the health risks and also the risk posed to nearby crops.

In 2016, the farmers demanded the army compensate them for the damage. The army refused.

Despite the IDF’s confirmation to +972, and later to Gisha, that it had sprayed herbicides inside the Gaza Strip, the Israeli Defense Ministry claimed in court filings that the planes only flew over Israeli territory. Gaza farmers have said, however, that the planes do, indeed, fly inside Gaza’s airspace.

Furthermore, based on documents obtained by the rights groups through a freedom of information request, the spraying is deliberately conducted when the wind would carry the chemicals further into Gaza and not toward Israeli fields.

During the Vietnam war, the United States famously sprayed Agent Orange, napalm and other herbicides and defoliants to destroy vast swathes of jungle in Vietnam for military purposes. After the health and environmental effects of such practices became clearer, however, the international community initiated the Environmental Modification Convention restricting the use of herbicidal warfare, which came into force in 1978. Israel is not a party to the convention.

Israel unilaterally “disengaged” from the Gaza Strip in 2005, removing the troops that had been stationed there for close to four decades. The Israeli military did not relinquish control over the strip, however, and still maintains control over: who and what goods may enter and exit Gaza; the strip’s maritime borders, including dictating where fishermen may fish; the “no-go zone” inside Gaza on its eastern and northern borders; its airspace; its population registry; and movement between Gaza and the rest of the occupied Palestinian territories.

Two Meals and Two Fields: At The Intersection of Hunger and Labor