You Are Here: Home → Blocking of vehicular access to a Palestinian village disrupts lives of 7,000 people

Blocking of vehicular access to a Palestinian village disrupts lives of 7,000 people 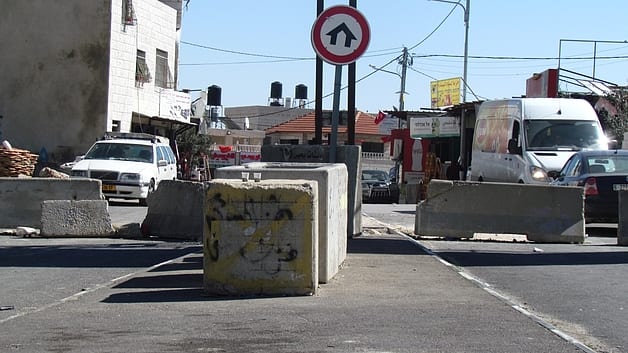 The village of Hizma is under blockade due to alleged stone-throwing at cars with Israeli license plates. This has impacted services, especially to children, the elderly, and the disabled, and undermined the economy of the village. It may amount to collective punishment, which is illegal according to international law.

Since 28 January 2018, the three access roads into Hizma village have been totally or partially blocked to Palestinian traffic by the Israeli military, and remain so at the time of writing. Hizma is a Palestinian village of over 7000 residents in Jerusalem governorate. The bulk of its built-up area is in Area B, but small parts of the village lie in Area C or within the municipal boundaries of Jerusalem, separated from the rest of the city by the Barrier.

The recent closures disrupt access by Hizma’s residents to services and livelihoods, with a disproportionate impact on children, the elderly and disabled people. General traffic between the north and south of the West Bank that passed through the village is now diverted, thereby undermining the commercial life of the village.

On 30 January, the Israeli army hung posters at the entrances of village shops stating that the army “shall continue its work so long as you [residents] continue to be disruptive”. Other posters showed windshields broken by stones. Based on communications with the Israeli military, the head of the village council said that the statement refers to the closures as a response to stone throwing by Palestinian youths at vehicles with Israeli number plates traveling on Road 437. However, no direct connection is evident between the closures that block vehicles and the ability of youths to reach on foot the main roads where stone throwing is reported.

The two access roads have been closed, one with concrete blocks and the second with a road gate. Residents are forced to park their vehicles near the entrance and walk past the obstacles on foot to continue their journey with alternative transportation on the other side. The third entrance, to the south, was initially closed with concrete blocks but these were later replaced by a flying checkpoint where Israeli soldiers check IDs and limit passage mainly to vehicles driven by people whose place of residence is Hizma.

Service providers, including a third of the teachers in village schools who commute on a daily basis, face delays and uncertainty in reaching workplaces and clients in the village. Over 50 shops/businesses that are the main source of income for 150 households are affected by the diversion of general Palestinian traffic from the village. These include corner shops, supermarkets, gas stations and plant nurseries. Family life has also been affected by the unpredictable nature of the closures that discourages, if not bars, visitors from the area.

Eleven families who reside in an area of Hizma severed from the rest of the village by a fenced section of Road 437 face particular problems as they are unable to cross this obstacle by foot and need transportation to reach the centre of the village. Prior to the southern entrance becoming partially accessible via the flying checkpoint, they were cut off from their centre of life, access to the health clinic and to schools.

The presence of the Israeli army at the entrances has also formed a friction point with residents, especially children. In one instance in late January 2018, the Israeli army detained nine children aged between nine and 15 years for three hours.

The closure of Hizma’s main entrances has been ongoing since 2015. The duration of the closures has gradually increased in recent years. The longest period of uninterrupted closure was recorded in early 2017 (56 days), followed by 2018 (44 days as of the end of February).

In 2018 so far there have been reports of two incidents of Palestinians throwing stones at Israeli vehicles that resulted in casualties (three injuries) or property damage (1 vehicle damaged) compared with nine such incidents in 2017.

Hizma is not a unique case. The closure of entrances to Palestinian localities from which stone throwing at Israeli vehicles has been reported, or where the homes of perpetrators or suspected perpetrators of attacks against Israelis are located, has been taking place on a regular basis since late 2015 in a context of heightened violence.

In a 2017 report to the Human Rights Council, the UN Secretary General stated that measures such as the closure of Palestinian towns and villages following attacks against Israelis “may amount to collective punishment”. He also underscored that “collective punishment is expressly prohibited by international humanitarian law. That prohibition does not apply only to criminal sanctions but also to harassment of any sort, including administrative measures, carried out by the police or the military”. 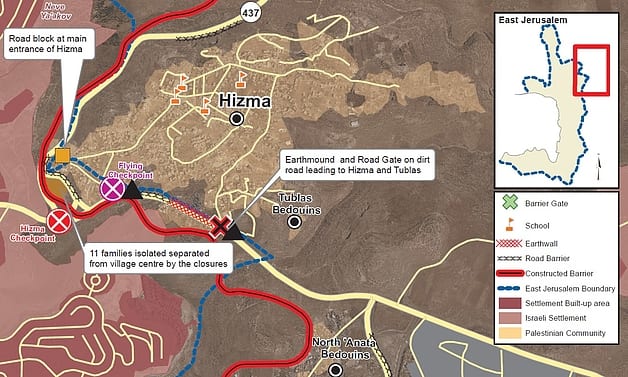 “Hizma’s strategic location near East Jerusalem and along the key access road that links the northern and southern West Bank has made it a target for Israeli occupation policies and practices. Thousands of dunums were confiscated for the construction of Israeli settlements, by-pass roads and the Wall, or were isolated behind the Wall. Since the beginning of the year, Israeli forces regularly conduct search and arrest operations in the village, and have increased its isolation. This is collective punishment. We are afraid that this latest wave of restrictions aims to take control of what remains of our land for the E1 settlement plan.”