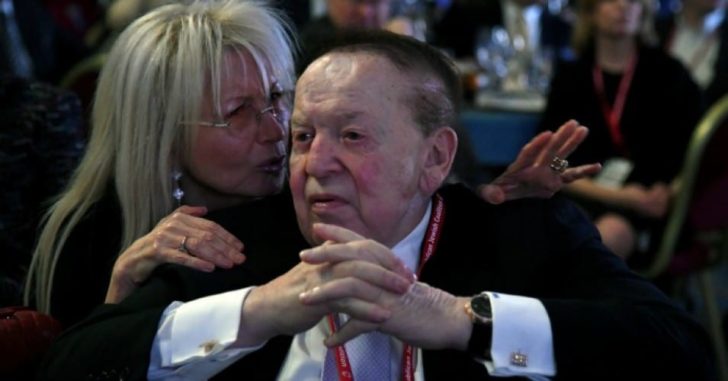 Billionaire Sheldon Adelson, who seems to prefer Israel to the US, runs ‘Trump’s’ Mideast policies

A bet on Donald Trump for president may have seemed risky two years ago. But for billionaire casino magnate Sheldon Adelson, the payout has been spectacular.

The 85-year-old and his wife Miriam gave $82 million+ to Republicans and candidate Trump in 2016, and within two years watched their man execute two major Adelson asks: moving the U.S. embassy in Israel to Jerusalem, and withdrawing from the Iran nuclear deal.

This was accomplished in consultation with Adelson comprador John Bolton, who in December 2016 promised members of the American Friends of Beit El that Trump would not only move the embassy—declaring Jerusalem the true capital of Israel—but that he would not oppose any Jewish settlement expansion in the West Bank territories. Adelson is also credited with opening the door for Bolton’s appointment to national security adviser in March

[IAK note: Adelson once said he wished he’d served in the Israeli military instead of the U.S. army:

(After this piece was published, Trump awarded Miriam Adelson the Presidential Medal of Freedom on Nov. 16)

Meanwhile, Adelson has enjoyed a direct line to Trump, speaking with him in person and on the phone at least once a month. Most recently Adelson was able to convince the president to cut off U.S. aid to Palestinian refugees living in crowded, dirty, and unrelentingly hopeless refugee camps outside Israel. Around the same time, Trump withdrew $25 million in assistance from impoverished East Jerusalem hospitals that also serve Palestinian cancer patients allowed in from the West Bank and Gaza for treatment.

Of course, Adelson’s pro-Zionist agenda, which includes expanding the settlements as far as they can go—most recently pouring his money into a huge new Israeli medical university on one of those settlements—is in sync with Israeli Prime Minister Benjamin Netanyahu and his Likud party. It’s been a great year for all involved.

And why not? For the first time in recent presidential history, there is no pretense of peace with the Arabs. Trump’s endorsement of a two-state solution at the recent United Nations General Assembly in September may have appeared hopeful, but it was as lame as it was patronizing. “I like [a] two-state solution,” Trump offered spontaneously, posing for smiling photographs with Netanyahu. “That’s what I think works best. That’s my feeling.”

For someone who supposedly has a “peace plan” but hasn’t announced it after two years in office, his “feelings” are as worthless as poker chips outside a casino. Maybe that’s why Bibi didn’t offer much of a response. After declaring he would consider Trump’s non-existent plan “with a keen and open mind,” Netanyahu reiterated that any Palestinian state endorsed by Israel will be an unarmed one. So not really a state at all.

Plus, actions matter. Not long after Adelson (and, it turns out, Netanyahu) encouraged Trump to strip all funding (an estimated $300 million allocated in 2018) from a UN agency tasked since 1950 with providing aid for Palestinian refugees, Trump abruptly closed the Palestinian Liberation Organization (PLO) offices in Washington—the only diplomatic conduit between the U.S. and the Palestinian National Authority. The reason given: “PLO leadership has condemned a U.S. peace plan they have not yet seen and refused to engage with the U.S. government with respect to peace efforts and otherwise.”

This is rich, considering the administration’s aggressive behavior and the friends it keeps—including Adelson. Moreover, Trump’s point man for the peace plan is none other than his son-in-law Jared Kushner, whose family has generously supported the aforementioned Beit El settlement and is old friends with Netanyahu. Kushner was the primary agitator behind yanking the refugee funding, calling the aid an entitlement program and the withholding of it a punishment for Palestinian leaders who vilify the administration.

More cynically, reports indicate he is merely helping Israelis end-run “right of return” for Palestinians and their kin displaced during the 1948 Arab-Israeli War. Similarly, the embassy move was designed to take the contested issue of Jerusalem “off the table.” Meanwhile, Netanyahu’s government just passed a nation-state law that declares Israel a Jewish state, one that affirms Jewish settlements and the right to self-determination for Israeli Jews only, codifying, in essence, that the 1.8 million Arabs living there are second-class citizens. This loads the dice before the games even begin.

Only people like Kushner and Adelson, who at a net worth of $42.5 billion is the 16th richest man on the planet, would see withholding food, education, and healthcare as way of “disappearing” a problem to gain leverage in future negotiations. Only Trump would consider that the “art of the deal.”

If this is “winning,” let’s hope this is one jackpot the White House never hits.