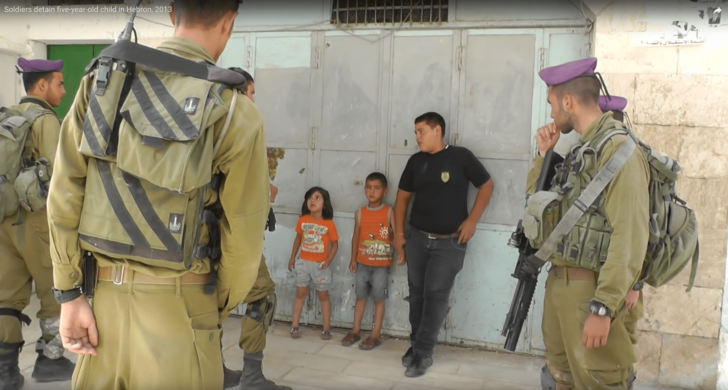 Israeli soldiers arrest a five-year-old boy in the Palestinian city of Hebron, July 2013. (Video below)

An international group created 20 years ago to monitor the situation in the West Bank city of Hebron has issued a confidential report based on over 40,000 incident reports that shows a consistent pattern of the Israeli forces violating human rights and international law. See two reports below and videos of Hebron:

The international observational organization, Temporary International Presence in Hebron (TIPH), has compiled the situation of Hebron city, over the last 20 years, into a single, significant and damning report.

According to an anonymous source who has read the report, speaking to Haaretz newspaper, the report revealed that Israel has been in severe and regular breach of a number of international and internal laws that they once vowed to uphold.

For a long time, Hebron has been a contentious place, having being divided in two under the 1997 Hebron Protocol. The Palestinian Authority controls 80% of Hebron city, with its 175,000 Palestinian inhabitants, known as H1. Israeli Forces control H2, which some 40,000 Palestinians live along with up to 800 Israeli settlers.

TIPH has been observing and monitoring the daily situation in Hebron with a goal of assisting and reporting on the maintenance of ‘normal life’. However, looking back on the last few years, the 100 page document shows that life in Hebron is anything but normal.

As an occupying nation, Israel is obligated by international rule to protect civilians that are being occupied, with a particular requirement of upholding the right to non-discrimination.

According to the PNN, explicit counts of favoritism to Israeli settlers and the oppression of Palestinians observed by TIPH’s 64 international mission members disprove any illusion of two peoples living side by side in equality.

Religion is a good example to illuminate the stark contrast between the treatment of the inhabitants of Hebron.

Jewish worshipers have had roads built for their convenience that cuts through Palestinian farmlands, with old Ottoman houses demolished to widen the road for their commute to pray.

For Muslims, on the other hand, their journey to the holy Ibrahimi Mosque is literally obstructed by Israeli security checkpoints at the only two access points to reach the mosque, where they get searched and sometimes even strip searched.

In addition to this, the Israeli military restricted the Muezzin from announcing the call to prayer, especially on Friday nights and Saturdays due to Jewish Shabbat. In fact, last month alone, Israeli forces silenced the Ibrahimi athan 47 times as to not annoy the Israeli settlers who also attend another section of the holy site.

Discrimination via freedom of movement

This continual prioritization of settlers and the suppression of Palestinians in H2 by Israel is also evident in people’s freedom of movement, the report states.

A notorious example that illustrates this is Shuhada Street. It used to be a bustling Palestinian market place, a commercial hub for merchants and a popular thoroughfare. Since Israeli forces  prohibited Palestinians to drive on this road and restricted access to pedestrians, the once thriving shopping center now resembles an ghost-like town, deserted and empty, with all its buildings shuttered.

Israeli citizens, however, can enjoy exclusive freedom of movement with full access to all roads. This also extends to movement between suburbs and townships, where many Palestinians struggle through unpleasant checkpoints manned by Israeli forces.

Next steps
The confidential report, exclusive to only the internal members of Israel, Palestinian authority and TIHP’s member countries (Italy, Norway, Sweden, Switzerland and Turkey) has overseen 40,000 incident reports against Israel’s actions in Hebron over the last 20 years. Haaretz said the report concluded with stating that the situation in Hebron is going in the opposite direction to what the Hebron Protocol was aiming to achieve.

TIPH’s detailed report does not provide any recommendations for action to be taken by any government – neither internal nor external. It is merely a reflection on the dire situation in the torn city of Hebron, over the last two decades.

A diplomat who has seen the report told Haaretz that it says “this basic human right is breached regularly and more and more severely for the Palestinians in Hebron – and particularly for those living in H2 – relating to lack of freedom of movement and the right to worship.”

“Normal life,” especially in Hebron’s Old City area in the Israeli-controlled area of H2, is nowhere to be found, the report says, referencing the TIPH mandate that states that the mission “assists in monitoring and reporting efforts to maintain normal life in the city of Hebron.” Furthermore, the old Palestinian vegetable market has become an Israeli military zone, often occupied by settlers and a playground for their children, according to the report.

The report also disputes land ownership claims in Hebron’s Old City made by settlers who say they represent previous Jewish owners who fled or were murdered during the 1929 Hebron massacre. Today’s settlers, the report says, have no family ties with previous owners of the property, and the question of ownership of land that had been inhabited or used by Jews prior to 1929 has still not been answered clearly. Regardless of these ownership claims, TIPH says the presence of any Israeli settlement in Hebron is considered a violation of international law.

The report also notes the exodus from H2 of those Palestinians who can afford to move to Palestinian Authority-controlled H1, where they face fewer restrictions. Those who can’t or don’t want to leave H2 have to confront “radical Israeli settlers” who are supported by the Israeli government and Jewish foundations abroad, the report claims.

The division of security responsibilities in H1 and H2 works in contradiction to the Hebron agreement and is hindering the movement of people, goods and vehicles within the city, the report warns. Obstacles and barriers between the two areas have developed into a military fortification consisting of numerous closures and checkpoints manned by Israeli security forces, especially controlling the city’s Palestinian inhabitants.

The report highlights Shuhada Street, which is probably Hebron’s most famous thoroughfare. Once a thriving Palestinian market, today it is devoid of Palestinians and its shops are shuttered. Palestinians are still not allowed to drive on the street and can’t access parts of it on foot, the report notes, adding that, over the past 20 years, TIPH has witnessed how these tight movement restrictions for Palestinians on Shuhada Street have spread to other parts of H2.

In contrast, Israeli drivers are granted access to all of H2’s roads. Gradually, the report says, settlers have been given the right to build and extend their settlement activities, including on Palestinian land. Infrastructure construction and maintenance for roads, water and access have also been prioritized for Israeli settlers, the report says.

TIPH also says it has seen land in the settlement of Tel Rumeida, rented by Palestinians for more than a generation, being closed by Israeli military orders and used for archaeological excavations, seeking to prove a Jewish presence there from the first century B.C.E.

Simultaneously, the TIPH report says, freedom of movement for the Palestinians living in Tel Rumeida has been seriously curtailed. Over the years, it has been enclosed and surrounded by several checkpoints – with dire consequences for its Palestinian inhabitants. They are not allowed to receive visitors who are not registered on a list held by the checkpoints guards. TIPH notes that Palestinians are often harassed at these checkpoints, and that the only way to bring food and other provisions to their homes is by foot. Studies, work and family relations are also very challenging for these residents, it writes.

TIPH also witnessed how paths and roads have been established on Palestinian farmland over the years, in order to create exclusive routes for Jewish worshippers heading from the settlement of Kiryat Arba to downtown Hebron. In addition, old Palestinian houses from the Ottoman era situated along this path were demolished in order to widen it.

The observatory mission also notes that Palestinians face numerous obstacles trying to access the Ibrahimi Mosque – which is an important religious site to both Muslims and Jews (the Tomb of the Patriarchs is also situated there). There are now only two access points to the Muslim holy site and worshippers have first to pass several Israeli-manned checkpoints. Worshippers are searched and sometimes required to lift up their clothes. The muezzin, TIPH notes, is not allowed to call worshippers for prayer on Friday evenings and Saturdays due to the Jewish Shabbat. The group adds that while some 1,600 Palestinian worshippers were counted attending the mosque on a given Friday in 2003, that number had been halved by 2017.

Although the report is highly critical of Israel, it does not lay out any demands or calls for action from either the Israelis or Palestinians. It was handed to the foreign ministers of the five contributing member states and was presented to diplomats visiting Hebron recently.

Haaretz asked TIPH to comment on the report and whether any actions were taken based on its findings. In response, a spokesman said that their mandate “states that TIPH assists in monitoring and reporting efforts to maintain normal life in the city of Hebron, and in accordance with the Hebron protocol and the agreement between the parties. Regular reports are shared with the Palestinian and the Israeli authorities as well as the five contributions countries. As requested by the parties, all information produced by TIPH is strictly confidential. TIPH has a regular dialogue with both parties.”

Haaretz requested the Prime Minister’s Office comment on the report and its findings, but was referred to the Foreign Ministry, which said in response: “TIPH reports are not for publication. They are transferred to both sides based on the understanding that they will not be passed on to other parties, certainly not the media. Therefore, we have no intention of commenting on partial information or any other publications about this issue.”

Some videos from Hebron: