You Are Here: Home → Israeli settlers, with IDF complicity, have destroyed 800,000 olive trees since 1967 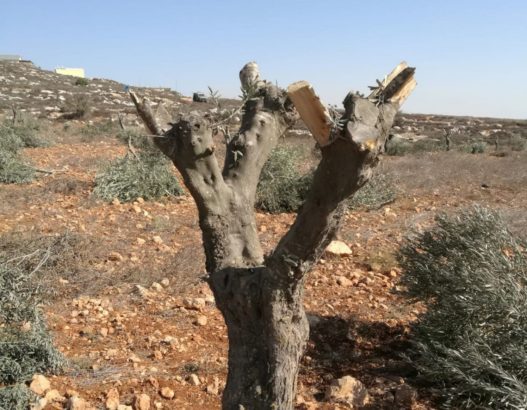 An olive tree uprooted in the village of Mreir, October 14, 2018. Credit: Abdullah Na’asan

Palestinians who rely on olive harvests for their livelihood have been terrorized by Israeli settlers since the beginning of the occupation in 1967. Settlers – often guarded or assisted by Israeli military – destroy trees and equipment, steal large quantities of olives, kill livestock, and attack Palestinian farmers.

In the ongoing travesty of justice, some olive groves are only accessible to their Palestinian owners for a few days a year; swaths of farmland has been appropriated by Israel for settlement expansion or military use.

According to local sources, Israeli settlers under the protection of Israeli forces stormed the area and uprooted dozens of Palestinian-owned olive trees.

Sources added that following the uprooting, Israeli forces arrived to the area and claimed that they opened an investigation regarding the incident, despite the presence and testimonies of the locals and owners of the uprooted trees.

Israeli settlers constantly harass Palestinian farmers and residents in the village, in attempt to force them out of their lands, as part of an Israeli plan to expand illegal settlements nearby.

For hundreds of Palestinian families, olive trees are the main source of income, however when harvest season approaches, Israeli settlers target Palestinian lands and cause severe economic damages.

According to a report by Israeli NGO B’Tselem, Israeli settlers’ vandalism in the occupied West Bank is a daily routine and is fully backed by Israeli authorities.

B’Tselem reported that “In just over two months, from the beginning of May to 7 July 2018, B’Tselem documented 10 instances in which settlers destroyed a total of more than 2,000 trees and grapevines and burned down a barley field and bales of hay.”

B’Tselem also argued that under the guise of a “temporary military occupation,” Israel has been “using the land as its own: robbing land, exploiting the area’s natural resources for its own benefit and establishing permanent settlements,” estimating that Israel had dispossessed Palestinians from some 200,000 hectares (494,211 acres) of lands in the occupied Palestinian territory over the years.

Between 500,000 and 600,000 Israelis live in Jewish-only settlements across occupied East Jerusalem and the West Bank in violation of international law, with recent announcements of settlement expansion provoking condemnation from the international community.