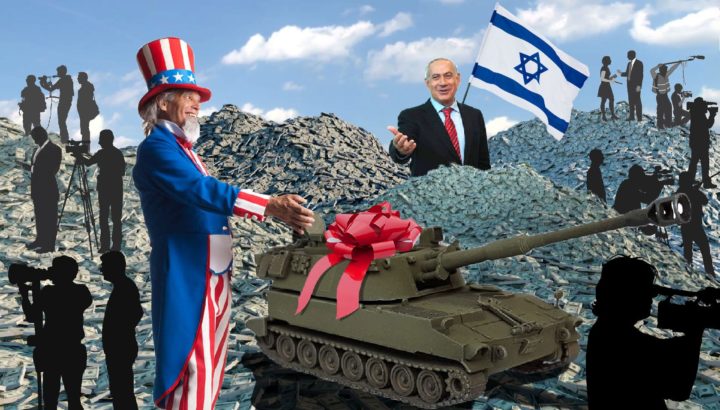 Congress is about to legislate the largest military aid package to a foreign country in U.S. history, but U.S. media aren’t telling the American public.

Israelis know about the money, and Israel partisans are pressuring the one lone Senator opposing it, but apparently U.S. news organizations don’t think the general public needs to know…

In an astounding case of media negligence, U.S. news media are failing to tell Americans that Congress is about to enact legislation for the largest military aid package to a foreign country in U.S. history.

This aid package would likely be of interest to Americans, many of whom are cutting back their own personal spending. 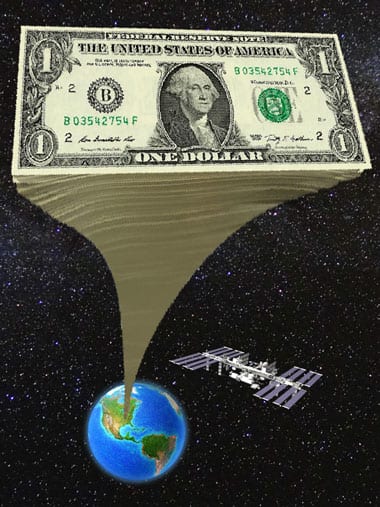 The package is $38 billion to Israel over the next ten years, which amounts to $7,230 per minute to Israel, or $120 per second, and equals about $23,000 for each Jewish Israeli family of four. A stack of 38 billion one-dollar bills would reach ten times higher than the International Space Station as it orbits the earth.

And that’s the minimum – the amount of aid will likely go up in future years.

The package was originally negotiated by the Obama administration in 2016 as a “memorandum of understanding (MOU),” which is is an agreement between two parties that is not legally binding.

The current legislation cements a version of that package into law – and this version is even more beneficial to Israel. Among other things, it makes the $38 billion a floor rather than a ceiling as the MOU had directed.

While U.S. media did report on the MOU two years ago, we could not find a single mainstream news report informing Americans about this new, even more extravagant version – and that it is about to become law, if constituents do not rise up in opposition.

And many Americans likely would oppose the legislation, if they knew about it. Surveys show that 60 percent of Americans feel the U.S. already gives Israel too much money. Many oppose Israel over its systemic human rights violations.

While U.S. media are inexplicably ignoring this massive aid legislation, Israeli media and Jewish publications are covering it regularly, and Israel lobbying organizations are calling on their members to support it. AIPAC, the American Israel Public Affairs Committee, reportedly pioneered the legislation.

The current aid package is divided between two bills. The first part – $5.5 billion over 10 years – is in the 2019 military spending bill, which was passed earlier this year.

The second part – $33 billion – is in the bill currently in the Senate: ‘‘S. 2497 Ileana Ros-Lehtinen United States-Israel Security Assistance Authorization Act of 2018.’’ The bill is named in honor of retiring U.S. Congresswoman Ros-Lehtinen for her long service to Israel. The bill has 73 sponsors and co-sponsors.

While there were many news reports on the Pentagon spending bill, it appears that none of the reports mentioned the billions of dollars to Israel. PBS did an in-depth examination of the bill, and while it included a discussion of aid to Ukraine, it failed to mention aid to Israel – which is over ten times higher. .

The current aid bill has been in process for many months and has passed through several stages.

It was introduced last March and passed by the Senate in August; an even stronger version was passed by the House in September, and now that version is back in the Senate. Yet, U.S. news media seem to have failed to report on any of these actions.

Last week, Senator Rand Paul (R-Ky) placed a hold on the bill, which means that he may filibuster against it if the bill goes to a vote. In all likelihood it will, given that Senate Majority Leader Mitch McConnell has received over $1.5 million from pro-Israel campaign donors, and given that pro-Israel donors often dominate U.S. politicians (recent leaked video footage shows Israel lobby manipulation first hand).

AIPAC has reportedly issued an action alert to its members to pressure Senator Paul to end his historic effort against aid to Israel, and has placed Facebook ads targeting him. Paul has issued a statement in response and says he will introduce an amendment in the coming days.

Somehow, U.S. media have so far missed both this extraordinary action by an American Senator and the orchestrated pressure against him, but Israeli media are covering it thoroughly.

In other words, Israelis know about the $38 billion legislation, Israeli partisans in the U.S. know about it and are pressuring Congress to pass it, but the large majority of American taxpayers whose money will be given to Israel have no idea that the legislation is even before Congress.

The bill gives Israel a number of additional perks of various types. For example, Section 108 authorizes Israel to export arms it receives from the U.S., even though this violates U.S. law and may well cost American jobs.

The bill also requires NASA work to with the Israel Space Agency, despite accusations of Israeli espionage against the U.S. In 2015 a Caltech scientist revealed that the Chair of Israel’s National Committee for Space Research had illegally acquired classified U.S. information. The alleged espionage and theft largely took place at Caltech’s Jet Propulsion Laboratory, a top NASA research and development center. This was also largely ignored by mainstream media.

The Israel aid legislation is problematic on a number of grounds, among them:

(1) It would fund Israeli violations of international law and human rights abuses, causing tragedy in the region and hostility to the U.S.
(2) As noted above, the majority of Americans feel we already give Israel too much money.

In addition, in the past, Israel has used U.S. aid in ways that repeatedly violated the Arms Export Control Act (AECA), which prohibits re-export of U.S.-origin defense and dual-use technology. Israel has also been charged with using U.S. weaponry illegally.

For many years, U.S. media have provided Israel-centric reporting, inaccurately portrayed the chronology, and failed to give Americans the full picture. Even alternative media frequently filter the information they provide to Americans, and it appears that almost none of the larger sites have covered the current aid package.

If Rand Paul does filibuster against the aid, perhaps there will be some news coverage at that point, at least in his home state of Kentucky.

But whether or not the general American public is told about it, there is no doubt that Israelis and Israel partisans will continue to learn of Paul’s action. Watch for negative news reports about Paul in the coming weeks and months – quite likely from across the political spectrum.

Free Beacon, a rightwing pro-Israel website, reports that Paul “has had multiple confrontations with the pro-Israel community over the years as result of his views. Paul has sought to hold up U.S. aid to Israel multiple times over the years, creating friction between him and top U.S. pro-Israel lobbying shops.”

Wolf Blitzer, who lived in Israel for many years and used to work for the Israel lobby, recently ranted against Paul during an interview on a different matter. Such animosity against a U.S. Senator considered “the last obstacle” to Israel’s latest money grab is unlikely to diminish.

We will post updates when U.S. media finally mention the aid package:

Finally, on Nov 30th, Politico mentioned the package (after If Americans Knew had sent a press release about it to over a thousand news outlets around the US). Politico gave little information about the aid package, failed to tell readers it was the largest such aid package in US history, and neglected to mention the ways in which it modified the Obama MOU to make it even more favorable to Israel. The article, by Nahal Toosi, quoted Israel partisans but failed to interview any supporters of Palestinian rights.