You Are Here: Home → The Nakba: Israel’s ethnic cleansing operation to create a Jewish majority in Palestine

The Nakba: Israel’s ethnic cleansing operation to create a Jewish majority in Palestine 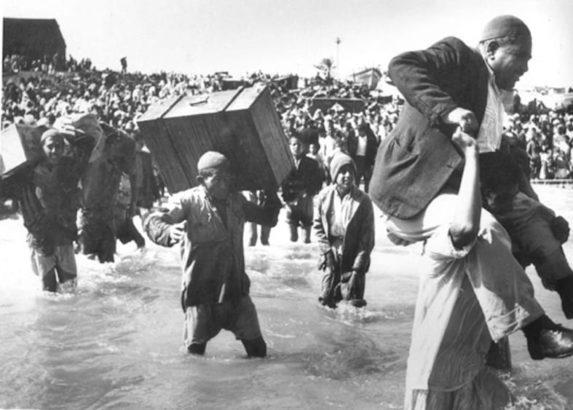 Today marks the 69th anniversary of the Palestinian Nakba, which means “catastrophe.”

The founding of Israel as a “Jewish State” was preceded by a massive ethnic cleansing operation to remove as many of the Muslim and Christian inhabitants as possible.

During Israel’s “war of independence,” over 750,000 Palestinians were driven from their homes, never to be allowed to return. Hundreds of towns were razed; villagers were massacred. Their very existence on the land was nearly wiped from history as Israel built new towns over the ruins and gave them Hebrew names.

This devastating humanitarian disaster is given almost no attention by in American history books or by the mainstream news media even though it is crucial in understanding the ongoing violence in Israel-Palestine and the Middle East in general.

Palestinian refugees and their descendants living in the West Bank and Gaza continue to live under an Israeli military occupation funded by American taxpayers to the tune of $10 million a day.

Hundreds of Palestinians political prisoners in Israeli jails continue their mass hunger strike for humane living conditions that began on April 17. Israeli forces continue to kill Palestinians with impunity, killing four Palestinians this month alone, including a teenage girl and a young fisherman today in Gaza.

It is imperative that we educate our communities and demand an end to the use of our tax dollars for killing and destruction.

Here are some ways you can do so: