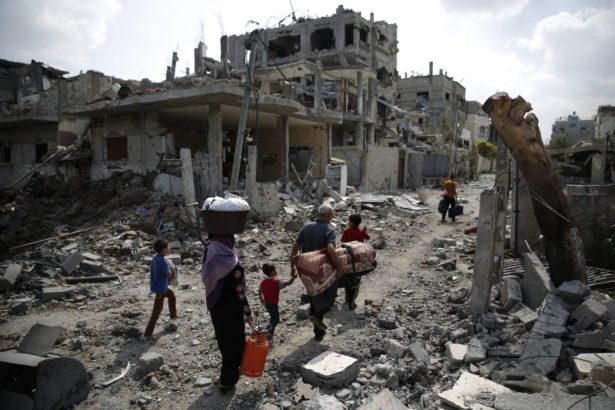 A Palestinian family carries their belongings towards the remains of their destroyed home, hit by Israeli shelling and air strikes. August 5, 2014. (Finbarr O’Reilly/Reuters)

During Israel’s 2014 onslaught against Gaza, Israel said ‘jump,’ and Obama and Biden jumped… to the tune of a quarter of a billion taxpayer dollars

Israel had said ‘jump,’ and Obama and Biden had jumped – to the tune of a quarter of a billion dollars. (This is on top of the $10 million per day that Israel was already getting from American taxpayers.)

In the course of the debate, Blinken boasted of an incident in which Obama and Biden had instantly done Israel’s bidding. The incident took place during Israel’s 2014 onslaught against Gaza.

Keep in mind that Israeli forces had waged a massive air and land assault on Gaza in July 2014, killing about 2200 Palestinians – of which 1500 were civilians, including 500 children, 16 health care workers, and 9 journalists. In response, Palestinian resistance fighters had killed 66 Israeli soldiers and 6 Israeli civilians and injured 550 Israelis – 85% of them invading soldiers.

In addition to the deaths, Israeli forces had damaged or destroyed 116,000 Gazan homes, leaving over 100,000 people homeless. They had also destroyed or damaged 216 Gazan schools and 67 Gazan health care facilities. Of the 11,000 Gazans injured, 3,300 were children; 1,000 of them are permanently disabled. More than 1,500 Palestinian children were orphaned. (For more details go here.)

To demonstrate how pro-Israel the Obama administration was, Blinken proudly described to the virtual forum audience Obama and Biden’s role (and his own) in assisting Israel’s pulverization of Gaza. He began dramatically:

“I got a call late one night from the Israeli Ambassador Ron Dermer, and he said, ‘Can I come over tonight? It’s something urgent.’

“And I said, of course, come on over.

“This is about 9 o’clock at night at the White House. And he and the military attache from the [Israeli] embassy laid out to me in detail why Israel urgently needed a replenishment of Iron Dome interceptors that were saving lives from missile attacks.”

(Gazan resistance fighters had begun launching rockets in 2001 following Israeli attacks. By 2014 the rockets – most of them small, home-made, largely ineffectual projectiles – had killed a total of 23 Israelis. During the same time period, Israeli air strikes had killed thousands of Gazans.)

“The next day,” Blinken continued, “I went to the Oval Office. I sat with President Obama and Vice President Biden. I laid out what I’d heard from the ambassador and the military attache, and I got three words from both of them in response: ‘Get it done.’

“That was Friday morning. Tuesday, we had a quarter of a billion dollars from Congress to replenish Israel’s Iron Dome supply. That’s the kind of real action — real deeds — that go to the heart of Israel’s security.”

Israel not ally – Congress to give it $38 billion

While Blinken was trying to claim that Democrats were more pro-Israel than Republicans, the fact is that politicians from both parties have kowtowed to Israel for decades, with only a few exceptions (see this, this, and this).

Today, a bill before Congress will give Israel a minimum of $38 billion over ten years – the largest military aid package in U.S. history. The bill is co-sponsored equally by Republicans and Democrats. It has already passed the House, and last month the Senate Foreign Relations committee passed it in a unanimous voice vote, paving the way for it to be adopted sometime in the near future. U.S. media have failed to tell Americans about it.

While Americans are often led to believe that Israel is a U.S. ally, the reality is that Israel spies on us, steals our technology, involves us in wars on its behalf, and tried to sink a U.S. Navy ship, killing 34 Americans and injuring over 170.

The pro-Israel lobby in the U.S., the most powerful and pervasive lobby for a foreign country in our nation, is responsible for the massive financial and human capital that our politicians have expended on Israel, one of the world’s smallest nations – and one that was established through a war of ethnic cleansing.

The large majority of Gazans are refugee families violently expelled by Israel, their homes and lands confiscated for the new Jewish state.

Blinken has held senior foreign policy positions in two administrations over two decades.  He is close to Biden and is currently a senior advisor to the campaign. Blinken comes from an extraordinarily well connected family, the Washington Post once reporting that his “life story reads like a Jewish high-society screenplay.”

According to Blinken’s bio, he “had a voice in every national security and foreign policy debate of President Obama’s administration.”

Blinken has been particularly focused on Syria, a long time target of Israel strategists. A Wall Street Journal article reported that the administration’s increased focus on Syria was due to Blinken, whose recommendations tended to be hawkish. The Washington Post reports:

“Blinken surprised some in the Situation Room by breaking with Biden to support military action in Libya, administration officials said, and he advocated for American action in Syria after Obama’s reelection. These sources said that Blinken was less enthusiastic than Biden about Obama’s decision to seek congressional approval for a strike in Syria…”

On May 18, 2020 Blinken was featured in a video by the Democratic Majority for Israel, which works to rally liberal and progressives to support Israel, despite its long record of human rights abuses and systemic racism.

If Biden is elected, it seems probable that Blinken will again be in a strong position to help Israel. Below is the video:

On the other hand, If President Donald Trump is re-elected, his policies will likely continue to be heavily influenced by one of his major campaign donors, Israel partisan Sheldon Adelson and his Israeli wife, Miriam.

Adelson, with a current net worth of approximately $30 billion, once said he regretted serving in the U.S. army rather than the Israeli one.

Alison Weir is executive director of If Americans Knew, president of the Council for the National Interest, and author of Against Our Better Judgment: The Hidden History of How the U.S. Was Used to Create Israel. (Blinken’s quotes above are taken from the report by Jewish Insider.) The article has been updated with additional information about Blinken.