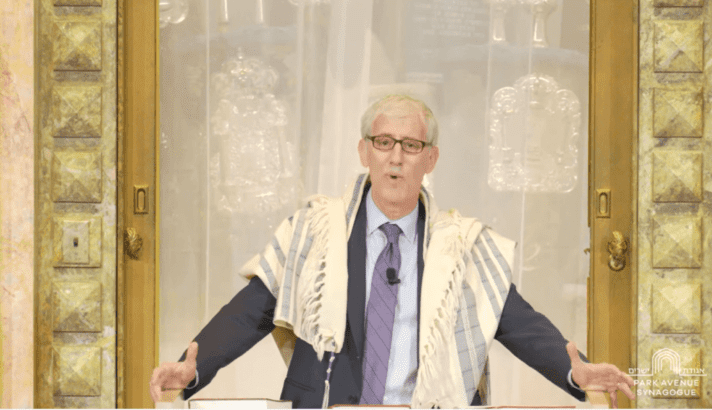 Last Saturday a leading New York rabbi urged his conservative congregation to “loudly, vociferously, vehemently use every means we have to defend the right of Israel to defend herself” against celebrity critics in the United States.

And a dozen times in his sermon, Rabbi Neil Zuckerman expressed worshipful feelings about his Israeli soldier son’s M16 because it represents the “miracle” of Jewish power.

Zuckerman told his Park Avenue Synagogue congregation that he stared at his son’s gun as it lay on the floor of his Jerusalem hotel room two weeks ago when his son stayed with him.

“I headed to the patio. And there it was, his gun. His M16 on the floor. Now for Israeli parents this might not be such a big deal to see your child’s gun from the army. But I’m not used to having a gun in my hotel room. Nor am I used to seeing my son carry that gun all over Jerusalem… So I sat down for a few minutes and I just considered what I was looking at… I thought about an essay my teacher Rabbi Donniel Hartman wrote several years ago called My Gun and I where he describes the ambivalence he feels about having owning a gun. I thought about the pride I felt in my son choosing to defend the state of Israel and the Jewish people… Mostly I thought about being in the land of Israel and the tension, as I looked at my son and the gun, between power and powerlessness.”

Zuckerman concluded that the gun represents the “miracle” of Jewish power in our age, to prevent genocide.

Here are some excerpts from the May 15 sermon.

Zuckerman said American media is filled with fake news about the latest hostilities, and he singled out a nine-minute “lecture” by Trevor Noah on the Daily Show that ignored the complications.

Of course we hear denunciations from the usual suspects condemning Israel as the colonial oppressor, as if there is no nuance to this devastatingly sad situation for the Israelis and for the Palestinians, who continue to suffer greatly under the rule of Hamas. And as if Hamas isn’t a terrorist organization whose goal is to destroy Israel, to wipe Israel off the map, it says so clearly in their charter…

Now if you happened to catch Trevor Noah on the Daily Show he exemplified the dangers of living, as David Harris says, in this post truth world where facts don’t seem to matter. A world where people obtain their news from celebrities and memes and opinions on Youtube and Instagram.

Noah had said that Israel needs to show greater “responsibility.” Zuckerman said Noah was showing indifference to the fact that Hamas is “a terrorist group” carrying out “genocidal acts against a civilian population.”

How much Jewish blood is enough that we would receive the blessing of a television comedian?… Jews– Noah is really saying, at least my read– I’m uncomfortable with your power and how you use it.

Zuckerman explained that Zionism was about using power “Jewishly”, including using force in a dangerous neighborhood.

Friends, Zionism is a response to the historical legacy of Jewish powerlessness. Zionism allows the Jewish people to reenter history, to control our own destiny, to shape our own society, to build cities, to shape the public square with Jewish values, to defend ourselves, and that means interrogating the proper way to exercise power.

Jews must heed two commands. One, not to be brutal. Second, not to be naive. Our “enemy… seeks to destroy us, without provocation.”

Bombs are falling in civilian populations, Israelis are sleeping in bomb shelters. We must loudly, vociferously, vehemently, use every means we have to defend the right of Israel to defend herself. We must dispel the myths of the moral comparisons or equivalency between the Israeli Defense Forces, the IDF, and Hamas. The IDF which seeks to minimize Palestinian civilian casualties. And Hamas which seeks to maximize Israeli civilian casualties.

Some in the Jewish community want to return to powerlessness, Zuckerman said, but in the time of a sovereign and powerful Jewish state, that is like going back to Egypt, and Jews must not do so.

Zuckerman returned at the end to staring at his son’s gun, and the “miracle” of doing so:

Friends, the days of turning back are over. What a miracle in our people’s history, a history filled with examples of powerlessness, that I can wake up in a hotel room in Jerusalem, watch my Israeli son sleep, and stare at his gun on the floor. I will continue to pray, we should all continue to pray for a time when swords are turned into ploughshares and he no longer needs to carry that gun. And I will pray that he and all of his fellow soldiers remember to not be cruel…

Let us all strive to live up to our highest ideals and aspirations as Jews and human beings. I will never give up on the dream of peace, but I’m not naive. We live in the real world. That gun– that gun is used to protect the Jewish people from those who wish to destroy us. And until redemption comes, I will continue to be thankful for that gun.

The rabbi’s comments will surely remind many readers of Marc Ellis’s famous formulation: he dreamed he was in the synagogue and when they opened the ark to take out the Torah an Apache helicopter flew out instead.

Zuckerman’s views are widely shared in the conservative Jewish community. Like Bari Weiss stating that the killing of “innocent children” is the “unavoidable burden” of Jewish self-determination. Like Ruth Wisse telling American Jews that they have it easy next to Jewish kids who must serve in the Israeli army and so American Jews need to serve two or three years in an information “army,” making Israel’s case in the media and on campuses. And many rabbis promote the rightwing Israel lobby group AIPAC from their pulpits.

P.S. Zuckerman related how his son went “home” to Israel a year back.

Philip Weiss is senior editor of Mondoweiss.net and founded the site in 2005-06. The site evolved within the progressive Jewish community and often focuses on Jewish aspects of the issue.