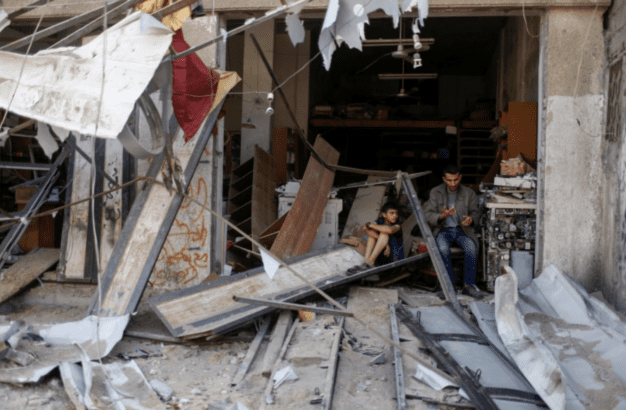 Palestinians sit amidst the damage in the aftermath of Israeli air strikes in Gaza May 20, 2021

By Fares Akram and Joseph Krauss, reposted from Associated Press

Israel on Thursday announced a cease-fire in the bruising 11-day war against Hamas militants that caused widespread destruction in the Gaza Strip and brought life in much of Israel to a standstill.

Prime Minister Benjamin Netanyahu’s office announced the cease-fire after a late-night meeting of his Security Cabinet. It said the group had unanimously accepted an Egyptian proposal, though the sides were still determining exactly when it was to take effect.

Senior defense officials, including the military chief of staff and national security adviser, recommended accepting the proposal after claiming “great accomplishments” in the operation, the statement said.

Defense Minister Benny Gantz wrote on Twitter that “the reality in the field will determine the continuation of operations.”

One member of the Security Cabinet said the cease-fire would take effect at 2 a.m., roughly three hours after the announcement. He spoke on condition of anonymity because he was not authorized to discuss the closed-door talks.

A Hamas official said the declaration of a truce was a defeat for Netanyahu and “a victory to the Palestinian people.”

Ali Barakeh, a member of Hamas’ Arab and Islamic relations bureau, told The Associated Press that the militants will remain on alert until they hear from mediators. Once Hamas hears from mediators, the group’s leadership will hold discussions and make an announcement, he said.

The agreement would close the heaviest round of fighting between the bitter enemies since a 50-day war in 2014, and once again there was no clear winner. Israel inflicted heavy damage on Hamas but was unable to prevent the rocket fire that has disrupted life for millions of Israelis for more than a decade.

The fighting began May 10, when Hamas militants in Gaza fired long-range rockets toward Jerusalem after days of clashes between Palestinian protesters and Israeli police at the Al-Aqsa Mosque compound, a flashpoint site sacred to Jews and Muslims. Heavy-handed police tactics at the compound and the threatened eviction of dozens of Palestinian families by Jewish settlers had inflamed tensions.

Israel launched hundreds of airstrikes during the operation, targeting what it said was Hamas’ military infrastructure, including a vast tunnel network. Hamas and other militant groups embedded in residential areas have fired over 4,000 rockets at Israeli cities, with hundreds falling short and most of the rest intercepted.

[NOTE: Gazan rockets, which were first launched in 2001 after Israeli airstrikes had killed 570 Palestinians, have killed a total of about 40 Israelis. During the same period, Israeli air attacks have killed over 4,000 Gazans.]

At least 230 Palestinians were killed, including 65 children and 39 women, with 1,710 people wounded, according to the Gaza Health Ministry, which does not break the numbers down into fighters and civilians.

Hamas and the militant group Islamic Jihad said at least 20 of their fighters have been killed, while Israel said the number is at least 130. Some 58,000 Palestinians have fled their homes, many of them seeking shelter in crowded U.N. schools at a time of a raging coronavirus outbreak.

Twelve people in Israel, including a 5-year-old boy, a 16-year-old girl and a soldier, were killed.

Since the fighting began, Gaza’s infrastructure, already weakened by a 14-year blockade, has rapidly deteriorated.

Medical supplies, water and fuel for electricity are running low in the territory, on which Israel and Egypt imposed the blockade after Hamas seized power in 2007.

Israel considers Hamas, an Islamic militant group that seeks its destruction, to be a terrorist group and Hamas’ government is not internationally recognized.

Israeli bombing has damaged over 50 schools across the territory, according to advocacy group Save the Children, completely destroying at least six. While repairs are done, education will be disrupted for nearly 42,000 children.

Israeli attacks have also damaged at least 18 hospitals and clinics and destroyed one health facility, the World Health Organization said. Nearly half of all essential drugs have run out.