You Are Here: Home → In Gaza, grief, destruction and ‘all the anger of the universe’

In Gaza, grief, destruction and ‘all the anger of the universe’ 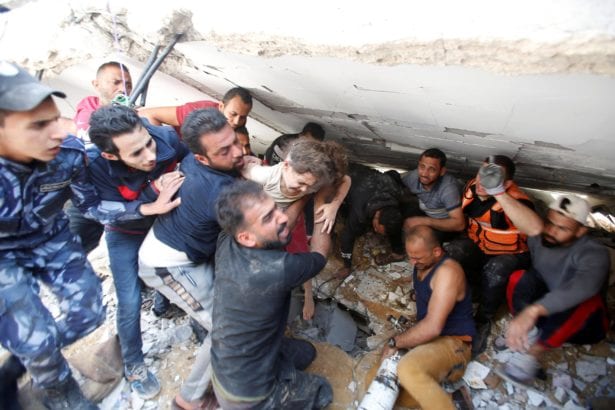 Gazans, raised amid generations of trauma, are dealing with a cascade of calamities. The territory was still rebuilding after the devastation of 2014, before this new phase of Israeli strikes once again damaged major roads, toppled high-rises, and killed children.

By Ishaan Tharoor with Claire Parker, reposted from The Washington Post

In a conflict already marked by harrowing scenes of tragedy, one image stood out. Rescuers in Gaza City on Sunday pulled out Suzy Eshkuntana, a 6-year-old, from the rubble of a building that had once been her home, but which was flattened by Israeli airstrikes. She was covered in dust but alive. Her mother and all four of her siblings were dead.

According to Reuters, Suzy woke up alone in Gaza’s largest hospital but was later reunited with her father, Riyad Eshkuntana. He told the news service that the family had assumed they would be safe during Israel’s nightly pummeling of the besieged Gaza Strip because of the presence of a number of doctors who also lived in their building. That was not the case.

Eshkuntana described how “a strange rocket, like fire and flame, destroyed two walls” of his home. He heard the dying cries of his son, Zain, trapped in the debris. He only later discovered in the hospital that one of his children still lived. “I was filled with all the anger of the universe, but when I heard that one of my daughters was alive, I said thank God because this girl might capture some — even a little — of my daughters’ smile because she is their sister,” the stricken father told Reuters.

It’s not clear why the Eshkuntanas’ home was brought crashing down. Israeli authorities told reporters that they had targeted a network of tunnels used by Hamas militants that may have run beneath the area where the family lived. “The collapse of the tunnel system,” Reuters reported, “caused the houses above to collapse and led to unintended civilian casualties, the military said.”

Abu Suheib lost his wife and and four sons: Suheib, 14, Yahya, 11, Abdelrahman 8, and Wisam, 6. They were all killed by an Israeli airstrike while visiting family to celebrate Eid.

“You’re going to your destiny, my love.” pic.twitter.com/FADQtSBYQv

In Israel’s telling, there are many more “unintended” casualties in Gaza. According to local Health Ministry officials, the death toll in Gaza climbed to 212 people, including 61 children and 36 women, as fighting entered its second week. Israel says it is aiming at militant groups’ military infrastructure. Palestinian militants have fired more than 3,000 rockets into Israeli territory, Israeli officials said. Most have been thwarted by Israel’s sophisticated Iron Dome defense network. Still, at least 10 people in Israel have been killed as a result of the indiscriminate barrages from Gaza. Millions more Israelis have been forced to take shelter as nighttime sirens blare warnings of incoming fire.

Yet, in a conflict defined by its asymmetry, the experience of those trapped in Gaza is indisputably worse. The territory is one of the most densely populated areas in the world, home to some 2.1 million people, the majority of whom are classified as refugees by the United Nations. That’s a legacy of the displacements that followed Israel’s creation in 1948 and the 1967 Arab-Israeli War. Children make up about half of Gaza’s population.

The territory has been under Israeli blockade since 2007, after Hamas took power following a rift within the Palestinian Authority. “Living conditions in Gaza are bleak: 95 percent of the population does not have access to clean water, according to [the United Nations], and electricity shortages periodically bring life to a halt,” my colleagues reported. “The territory has one of the highest unemployment rates in the world, World Bank statistics show, and the United Nations estimates that roughly 80 percent of the population relies on international aid to survive and access basic services.”

A number of leading human rights organizations accuse Israel of treating Gaza like a vast “open-air prison” and carrying out war crimes in both its latest bombardments and its overall management of the territory. On Friday, the chief prosecutor of the International Criminal Court said both Hamas and Israel could be subject to investigation for their earlier conduct in the conflict. But Israel, like the United States, does not recognize the ICC and rejects its ongoing probe into the Israel-Gaza conflict in 2014. It also points the finger at Hamas for operating in areas where Palestinian civilians are in harm’s way and for funneling resources to its preparations for further conflict.

Gazans, raised amid generations of trauma, are dealing with a cascade of calamities. The territory was still rebuilding after the devastation of 2014 before this new phase of Israeli strikes once again damaged major roads and toppled high-rises. My colleague Erin Cunningham reported last week that the hostilities endangered Gaza’s already hamstrung efforts to deal with the coronavirus pandemic. Then, on Sunday, it emerged that Ayman Abu al-Ouf, one of the territory’s lead medical officials on its coronavirus response team, was killed by an Israeli airstrike along with members of his family.

Every house in #Gaza has an emergency bag always ready. It contains official docs, necessities, some clothes, medicine & some memories we grab to take with us. Otherwise, U wouldn't have enough time to evacuate. #GazaUnderAttak #PalestinianLivesMatter

So, too, were 17 members of the extended al-Kulak clan. My colleagues reported on the wrenching ordeal of Sana’a al-Kulak, who was trapped for hours beneath the rubble of her home, which was destroyed during an Israeli attack. “Her husband, their two sons, a daughter, daughter-in-law, and a 1-year-old grandchild had all been killed, alongside at least 11 other members of her extended clan that had lived across two four-story buildings in Gaza’s Wehda Street,” they wrote.

Speaking to my colleague Hazem Balousha in Gaza, al-Kulak said she was not interested in revenge. “I just want the war to end,” she said. “But now there is no sense in life without my husband and children.”

When electricity affords Gazans access to social media, grief and despair tremble alongside grim determination. “Hands are yellow and shivering, but intertwined. … Try deep breathing,” tweeted Malak Zakout, a lecturer at the Islamic University of Gaza, describing the nightly routine of placing couches against windows while keeping important documents at hand in plastic bags. “We can’t calm ourselves, we just stare at each other in silence with love and fear.”

A video filmed by the Middle East Eye — and viewed millions of times since it was published last week — showed 10-year-old Nadine Abdel-Taif standing by the ruins of a neighbor’s home where eight children were reportedly killed. “What do you expect me to do? Fix it? I’m only 10. I can’t even deal with this anymore,” she said through tears. “All of this when I see it — I literally cry every day. I say to myself, ‘Why do we deserve this?’”

Ishaan Tharoor is a Foreign affairs columnist at the WashingtonPost, and anchor of Today’s WorldView.