You Are Here: Home → Rachel Maddow has not done a segment on Gaza in 7 years 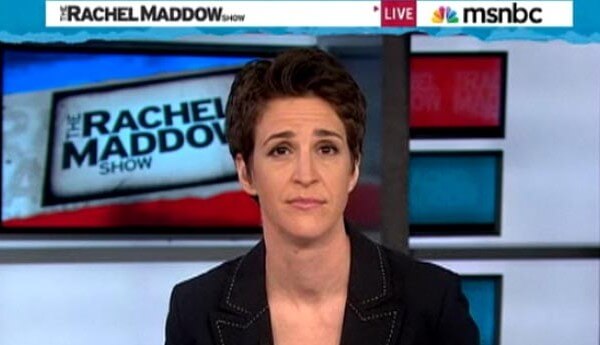 Over the course of a decade Rachel Maddow has had over 2,000 shows and has mentioned Gaza just five times. While others at her network have been speaking out, the MSNBC star remains silent. Another PEP – Progressive Except Palestine…

By Michael Arria, reposted from Mondoweiss

“Palestinians are at best third-class citizens in the nation of their birth,” the MSNBC anchor told viewers. “The idea that it’s even remotely controversial to call what Israel has imposed on Palestinians a form of apartheid is laughable.”

“After more than seven decades of not just being deprived of land from which they were evicted, Palestinian frustration runs deep,” he continued. “It may be worth going deeper than what you hear inside your bubble and understanding the depth to which the Palestinian people are subject to apartheid in their own land, deprived of basic necessities, and subject to relentless civil rights violations. This is not a secret. It’s out there for you to see, you just have to look for it.”

Velshi statement was echoed by Joy Reid, one of the most popular voices at the network. “What Ali Velshi says in this succinct explanation is just facts: painful, well known and documented facts,” she tweeted. “Israel has a right to exist in peace but so do Palestinians, who currently suffer under what can only be called apartheid. And no one is doing anything about it.”

These aren’t the only anchors who have highlighted the suffering of Palestinians. Ayman Mohyeldin (who lived in Gaza when he worked for Al Jazeera) has interviewed multiple Palestinians about Israel’s attacks, including the activist Mohammed el-Kurd. Mehdi Hasan has questioned the consistent pro-Israel narrative of most mainstream outlets.“The fundamental unavoidable reality at the heart of this conflict is there is an asymmetry of power here,” he said last week. “One side is the occupier. The other side is occupied. And media coverage, political commentary, international interventions that don’t reflect this fact… are all, I’m sorry to say, part of the problem.”

It’s important to put MSNBC’s recent coverage into context. It’s not that the network is suddenly fantastic on the subject of Palestine or has stopped bringing on Israel apologists. Acknowledging that Israel is an apartheid state also isn’t exactly controversial outside of the contours of U.S. political thought.

However, the mainstream media has been so reflexively pro-Israel for so long that even the most basic acknowledgement of Palestinian humanity can feel like a seismic shift. A recent Daily Beast article on Hasan and Mohyeldin declares that the duo is “doing something practically unheard of on an American television outlet.” Unfortunately that’s probably true, but what they’re doing is simply reporting on Israel’s brutality and treating Palestinians like human beings.

While MSNBC has improved on this issue overall, there’s no signs of evolution from the host of the network’s most popular show. In 2014 I wrote a piece for Mondoweiss about how Rachel Maddow was ignoring Operation Protective Edge, in which Israel pummeled Gaza for seven weeks and killed over 2,000 people. I had just written a small, angry book about the rise of MSNBC. It focused on how the network often chose to ignore the Obama administration’s murderous foreign policy or its war on whistleblowers.

There certainly weren’t any articles about how MSNBC was doing a great job covering Palestine back then, but even by the standards of the time Maddow’s silence stood out. Here’s part of what I wrote:

Maddow hasn’t mentioned the conflict once since touching upon it fleetingly last month; not one word about dead Palestinian civilians, not even Muhammed Abu Khdeir, the boy who was burned to death by Israeli vigilantes. Since the ascent of Barack Obama, MSNBC has been defined by its liberal outlook and, like many American progressives, they frequently come up short when it comes to the subject of Israel. However, Maddow’s silence is especially glaring, even by the standards of MSNBC: Joy Reid did a segment on Tariq Abu Khdeir, the Florida teen, who was beaten by Israeli police while protesting his cousin’s murder and Chris Hayes analyzed the vast differential between civilian deaths.

Last week I saw a tweet from The Intercept’s Jeremy Scahill. He had run a search of Maddow’s program over the past month and discovered that she hadn’t covered Israel’s attacks at all. “The most popular liberal cable news program in the U.S., The Rachel Maddow Show on MSNBC, continues to completely ignore the massacre underway in Gaza,” he tweeted. “A total of zero mentions of it this week. She even had the chair of the Senate Intel Committee on last night and… nothing.”

Scahill’s lack of results reminded me of my fruitless 2014 search. It also led me to wonder something: how many times has Maddow actually mentioned Gaza? So I took a look at her show’s transcripts.

Over the past decade Gaza has been mentioned in 16 episodes of The Rachel Maddow Show. Most of the time Gaza has been mentioned it’s usually just an aside, a passing comment during a segment about a different topic. Subtract those and you’ve cut the number in half: there’s been eight segments on Gaza since 2011. Three of those segments were done by guests hosts. Steve Kornacki twice and Joy Reid once. So, we’re down to five.

Three of those five involve John Kerry and the Obama administration’s alleged progress towards establishing peace in the region. Maddow never mentions that the United States government gives Israel $3.8 billion in military aid every year, nor does she bring up the fact that Obama did absolutely nothing to impede settlement expansion. Her coverage certainly doesn’t reflect the fact that one side is the occupier and one side is being occupied, to invoke Mehdi Hasan’s statement. In all these short reports Maddow frames the issue as if it’s a complicated puzzle that can’t possibly be processed by the human brain. These people are locked into a perpetual war that we are all powerless to stop. Here’s the introduction to one such segment:

And one of the world’s most depressing and maddening and tragic and terrible conflicts, one that seems like it is never over and there is never anything good to say, today, I swear there is a tiny bit old good news. All this week we’ve been reporting on how U.S. Secretary of State John Kerry has been trying to get Israel and Hamas to agree to a cease-fire.

The day after my piece at Mondoweiss ran, Maddow interviewed journalist Richard Engel from Gaza and he spoke about escalating violence in the region. In 2010, Maddow did a very short segment on the Gaza Freedom Flotilla raid. “We will keep you posted,” she told viewers. She did not.

So, over the course of a decade Maddow had over 2,000 shows and has mentioned Gaza five times. I did not search the transcripts for mentions of Russia.

Hate Inc.: Why Today’s Media Makes Us Despise One Another