You Are Here: Home → Another major human rights org reports: “apartheid” in Israel 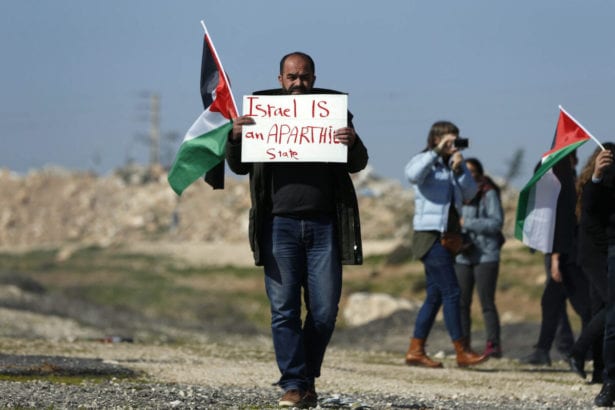 A protestor carries a sign during a demonstration by Palestinian, Israeli and foreign protesters against the newly-opened Route 4370, on January 23, 2019, in the occupied West Bank

Israeli authorities are committing apartheid and persecution against Palestinians, Human Rights Watch (HRW) says in a new report, drawing on years of documentation, case studies, and a review of government planning documents, statements by officials, and other sources.

The 213-page report, A Threshold Crossed: Israeli Authorities and the Crimes of Apartheid and Persecution, “examines Israel’s treatment of Palestinians. It presents the present-day reality of a single authority, the Israeli government, ruling primarily over the area between the Jordan River and the Mediterranean Sea, populated by two groups of roughly equal size, and methodologically privileging Jewish Israelis while repressing Palestinians, most severely in the occupied territory,” the rights group said.

HRW explained apartheid “as a crime against humanity consisting of three primary elements: An intent to maintain domination by one racial group over another. A context of systematic oppression by the dominant group over the marginalized group. Inhumane acts.”

Adding that it “found that the elements of the crimes come together in the occupied territory, as part of a single Israeli government policy.”

Across Israel and the occupied territory, HRW said, Israeli authorities have sought to maximise the land available for Jewish communities and to concentrate most Palestinians in dense population centres.

Israeli officials are committing the crimes of apartheid and persecution.

The world needs to act on behalf of the millions of Palestinians being institutionally discriminated against. https://t.co/b7uzsDfiVD #Courage2FightApartheid pic.twitter.com/CrWtRUt51e

“To maintain domination, Israeli authorities systematically discriminate against Palestinians,” the report explains. This is done through a range of means including laws that allow hundreds of small Jewish towns to effectively exclude Palestinians and budgets that allocate only a fraction of resources to Palestinian schools as compared to those that serve Jewish Israeli children.

In the occupied territory, “draconian military rule” is imposed on Palestinians while Jewish Israelis living in illegal settlements and outposts in the same territory are afforded their full rights “under Israel’s rights-respecting civil law”. This, it adds, “amounts to the systematic oppression required for apartheid.”

Palestinian citizens of Israel are not exempt from the abuse, with the report highlighting the hugely controversial Nation-State Law which was brought into law in 2018 and which established Israel as the “nation-state of the Jewish people”. This, along with other policies, has made clear Israel’s “intent to maintain the domination by Jewish Israelis”.

HRW called on global power to condition arms sales to Israel and future trade deals on the occupation “taking concrete and verifiable steps toward ending their commission of these crimes”.

Last week, Palestinian President Mahmoud Abbas warned that Israel is on the path to becoming an apartheid state in a speech to the annual J Street Conference in America.

This comes months after rights group B’Tselem described Israel as an “apartheid” state that “promotes and perpetuates Jewish supremacy between the Mediterranean Sea and the Jordan River.”

In 2017, the head of the UN’s Economic and Social Commission for Western Asia (ESCWA) Rima Khalaf was forced to resign after what she described as pressure from the secretary-general to withdraw a report accusing Israel of imposing an “apartheid regime” on Palestinians.