You Are Here: Home → Why we must boycott Pillsbury – by a Pillsbury family member

Why we must boycott Pillsbury – by a Pillsbury family member 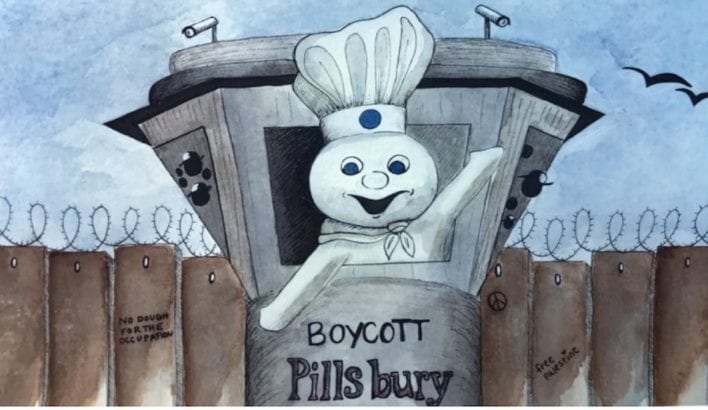 Minnesota-based General Mills is operating a Pillsbury factory on an illegal Israeli settlement.

Pillsbury is doing business in illegal Israeli settlements & profiting from Israel’s war crimes, and a member of the PIllsbury family is calling for boycott of his own family’s products.

When our ancestor Charles A. Pillsbury founded the Pillsbury Company over 150 years ago, he could not have imagined that his products would one day reach every corner of the world. What started with the purchase of one flour mill on the west bank of the Mississippi River in 1869 became a household brand, which is now owned by General Mills.

We take pride in seeing our family name associated with products sold around the world. But in these times we no longer can in good conscience buy products bearing our name.

Last year, the United Nations published a list of companies doing business in Israel’s illegal settlements in the occupied Palestinian West Bank. We were saddened to learn that General Mills was included on this list for operating a factory manufacturing Pillsbury products in an Israeli industrial zone in occupied East Jerusalem.

We learned that General Mills built this factory on land that Israel illegally confiscated from the Palestinian town of Beit Hanina. Israeli settlements in the West Bank, including in East Jerusalem, are illegal under international law and are under investigation as war crimes by the International Criminal Court.

We also are disappointed by the indifference General Mills has shown to this issue in its media statements. Instead of taking responsibility for building a factory on confiscated land, General Mills has boasted that the factory employs Palestinians.

Of course, hiring Palestinians is a good thing to do; but providing jobs to a few Palestinians does little to offset the enormous costs of a brutal occupation, nor does it excuse General Mills from profiting from Israel’s war crimes. As Human Rights Watch and Amnesty International, among others, have observed, companies cannot operate in this political context without themselves being an integral part of the problem.

As a result, several human rights organizations, including Jewish Voices for Peace, American Muslims for Palestine and the American Friends Service Committee have declared a consumer boycott of Pillsbury products. As people of conscience, we have no choice but to join this boycott of the very brand our family worked so hard to build.

As long as General Mills continues to profit from the dispossession and suffering of the Palestinian people, we will not buy any Pillsbury products. We call on General Mills to stop doing business on occupied land. And we call on all people of good conscience and all socially responsible organizations across the globe to join in boycotting Pillsbury products until General Mills stops this illegal and immoral practice.

Charlie Pillsbury is distinguished practitioner in residence and co-director, Center on Dispute Resolution, Quinnipiac University School of Law. This statement is also submitted on behalf of George, Leah, Lydia and Sarah Pillsbury.